Stars of the spoken word: Meet the audiobook narrators who are quietly saving book publishing 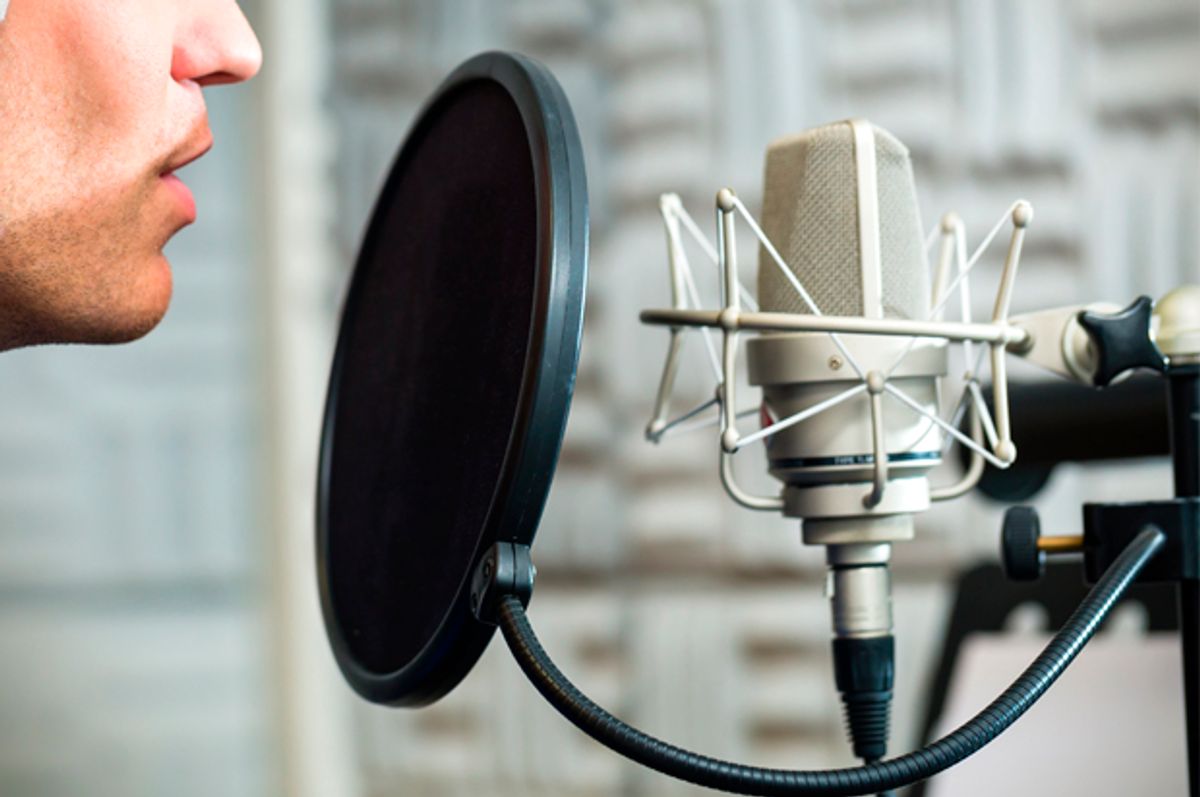 Even in these cynical, ruthlessly pragmatic days, where art has become “content” and many have lost faith in the ability of literature to illuminate our lives, there remains one dogged subculture that believes deeply in the power of the aesthetic. To them, the arts still have something holy about them.

These idealists are audiobook narrators. Many of them are former and working stage actors who talk earnestly about the importance of their characters, their own commitment to the written word and the power of storytelling.

At the very least, the boom in audiobooks — sales of which increased by 35.3 percent in the first quarter of the year, a period during which sales of hardback books slumped and e-books fell precipitously — shows a rare bit of good news for the publishing world. “It’s definitely the fastest growing part of the publishing industry these days,” Annie Coreno, reviews editor for Publishers Weekly, told Salon.

In 2011, she says, about 7,000 audiobooks were released; by 2015, releases numbered around 35,000, as publishers put out recordings of new books as well as audiobooks from their back catalogs. The dominant company, the Amazon-owned Audible Studios, now offers 250,000 pieces of audio literature. Members of its subscription service listen to an average of more than 17 books per year, and membership has increased 40 percent annually. Much of the surge of audiobooks is made possible by the streaming technology and ubiquity of smart phones.

The expansion is expected to continue for years to come. And while recordings of literature have been around since the 19th century, the audiobook boom is much more recent. “It’s like being part of the space program in the ’60s,” Luke Daniels, a Michigan-based reader who specializes in science fiction, fantasy and thrillers, told Salon.

Some audiobooks — especially the classics — are read by famous actors: Nicole Kidman narrates Virginia Woolf’s “To the Lighthouse,” Samuel L. Jackson reads Chester Himes’ “A Rage in Harlem,” and Jeremy Irons has drawn acclaim for his renditions of “Lolita” and Evelyn Waugh’s “Brideshead Revisited.” Others books — including the memoirs by Tina Fey and Maya Angelou and the novels of Neil Gaiman — are read by their authors. (Some books, like Gillian Flynn's "Gone Girl," or David Mitchell's "Cloud Atlas," have multiple narrators and thus multiple actors reading them.)

But the majority of audiobooks are narrated by people few outside the field have heard of. Within this world, readers like Jim Dale, a British actor who voices more than 100 characters in his recording of the Harry Potter novels, and Robin Miles, a former “Law and Order” actress who recently recorded Jacqueline Woodson’s novel “Another Brooklyn,” are revered.

These audiobook narrators are the character actors of the literary world: They are often prolific people whose work you know even if you don’t know their names. But in other ways, they’re the opposite of actors like Luis Guzman or Abe Vigoda: Instead of tending toward one distinctive kind of sidekick or secondary role, they need to be deeply versatile. For some, this is a plus. “As an actor, you get typed,” says Daniels. “I’m a tall white guy in my 30s. Here I get to play the characters I never would [onstage]. The most joy I get is to play an 8-year-old girl having a conversation with an old man — I love that.”

Narrator Fred Berman refers to himself and his peers as the “blue-collar” or “working-class” actors. By night he appears on Broadway as Timon the meerkat in “The Lion King”; by day he narrates books like Lincoln Peirce’s series featuring ornery sixth grader Big Nate, or Leigh Bardugo’s YA bestseller “Crooked Kingdom.”

“It can be exhausting,” Berman said, adding that he keeps up the time-consuming mix of Broadway and narrating because “There’s always the actor’s fear that your next job will be your last. And creatively, [books] are a great outlet.”

Berman’s story isn’t unique. “Whenever I go to a Broadway play,” PW’s Coreno said, “the program lists the plays an actor has done, and then says they’ve narrated 150 audiobooks.”

Other actors have devoted themselves almost wholly to narration. The Los Angeles-based Scott Brick, for instance, started his career in a group that brought Shakespeare and other classic plays to public school children. But after he lucked into the audio world, through the connection of a college friend, work began to build. Now, besides teaching two acting courses at UCLA, one of which he calls the first fully accredited university course on audiobook narration, he's a full-time narrator; he has almost 800 books to his credit, including Frank Herbert’s “Dune” novels, Isaac Asimov’s “Foundation” cycle, part of “Cloud Atlas,” Stephen R. Donaldson’s Thomas Covenant trilogies, and Michael Pollan's books on food.

In some ways, Brick says, the craft is similar to any acting challenge: “When you’re working on stage or screen, there’s a lot of backstory, where you’re looking for motivation and a character’s history. Here you’re trying to research anything that tells you about a character,” with an emphasis on accents and vocal style. Because he has so many jobs — he says he’s veered very close to workaholism in the past, and has had to tune things down lately because of a run-in with thyroid cancer — Brick sometimes hires people to research a character for him, and give him notes before he starts reading.

Voice actors approach this part of the job differently. In contrast to Brick’s deep preparation, Daniels — whose parents were Shakespearean actors and whose own roots are in regional theater — prefers to wing it. This partly comes from the demands of the field (actors often get their books very soon before having to complete recordings) and partly from his personal philosophy: “I want it to be a free-floating experience, the way it would be if you were reading the book yourself. If you do a script of Shakespeare, you do three days of table work so you can get into it.”

Daniels says his years doing improv help out here, but adds that doing readings cold is a bit “controversial” in the audiobook world. In any case, he now records out of a tiny studio in his basement, which he compares to the TARDIS from “Dr. Who.”

There are other philosophical disagreements in the audiobook world. Daniels, for instance, finds the traditional emphasis on a low-key “straight read” self-defeating. “Especially because people listen while they're busy doing other things. You’re giving it a little bit extra, so when people are driving or cleaning their house they can still follow it.” This sometimes means affecting bold accents and an extroverted style.

Brick sees the issue a bit differently, typically giving just a hint of an accent, and doing his best to disappear. “I have a responsibility to the author, and my job is to make that construct — my performance — as small as possible,” he said. “The most important thing to me is the author’s words.”

Generally, though, there is more and more emphasis placed on narrators’ performance; Coreno says publishers are starting to pitch performances to Publishers Weekly rather than just an audiobook’s words. (PW gets somewhere between 200 and 300 audiobooks to review each month, and ends up covering about 20.) Readings are celebrated every year at the Audies, the audiobook version of the Oscars or the Man Booker Prize. Still, Coreno says that audiobook narrators don’t get as much respect as other members of the publishing world.

The future is likely to offer more growth; Berman compares it to the way online streaming has opened up work for television actors. At the same time, he suspects voice actors’ earnings may be going down slightly, in part because of the pressure to build a home studio and become one’s own director and engineer, which increases overhead and reduces productivity. Reports of annual earnings show the median somewhere between the mid-$30,000s and mid-$40,000s, depending on where a narrator is based and the size of their reputation. Berman says that in the same way that TV actors increasingly complete against film actors frustrated with the movies, so voice actors are increasingly competing against movie stars, too.

Whether audiobooks are a vehicle for artistry or a way of paying the rent, though, they seem to be giving actors new ways to make their living.

“The cost of living in New York is prohibitive,” says Berman, “and for an artist there’s rarely a steady job. There’s a campaign for fair wages for Off-Broadway actors. I don’t know how you do it.”

For all the damage the digital revolution has done to artists' livelihoods — like rising rents in cities that employ software engineers, and the struggles of independent bookstores in an age of online retail — this seems to be a case, so far, where technology is creating opportunities for the creative class.