Divorce is bad, argue Christian leaders. And yet the Clintons are judged moral failures for staying together 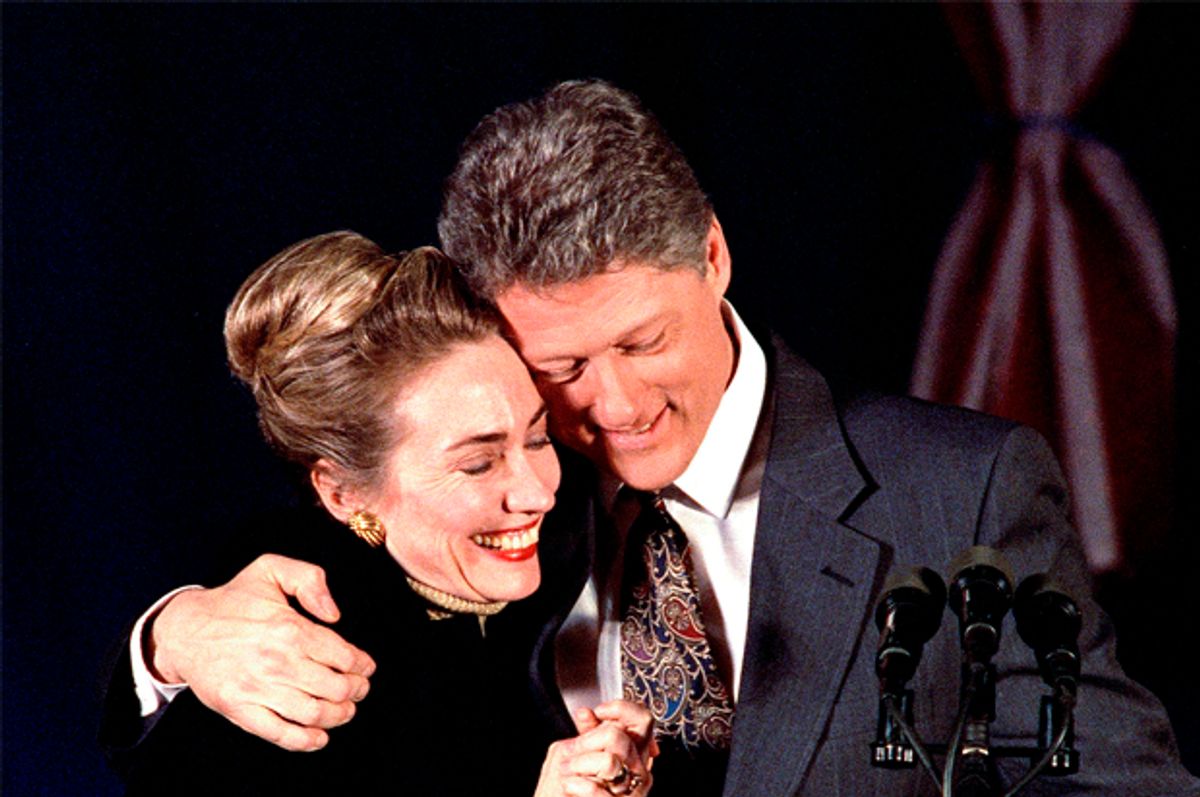 During our marriage counseling, I confessed that I didn't know if I would stay together with my future husband if he cheated. Our pastor frowned and responded that he hoped I would keep an open mind. "Marriage," he said, "is forever."

It's an idea pervasive throughout Christian American culture — a marriage is forever.

In contrast to these teachings, Democratic presidential nominee Hillary Clinton's 41-year marriage, which has famously weathered adultery, is often under attack.  The day after the first presidential debate, Republican nominee Donald Trump told "Fox and Friends" that he didn't bring up Bill Clinton's past infidelity scandals out of respect for their daughter Chelsea, who was in the audience at the time. But the implication of the threat was clear: that Trump would and could use the fact that the Clintons have weathered many marital challenges against his opponent. This line of attack has become a resonant moral critique of Clinton among Trump supporters, who largely identify as white Christians. Previously, Sean Hannity blamed Clinton for protecting her husband by trying to destroy the women with whom he had affairs. The National Review accused Clinton of enabling her husband's affairs. Last week, Rudy Giuliani called Clinton "stupid" for standing by her husband during the Monica Lewinsky scandal. And on Friday night, after a tape of Donald Trump making comments about grabbing women's genitals emerged, Trump gave a lukewarm apology before attacking Hillary Clinton — blaming her for being married to Bill Clinton. As if his comments were somehow equivocal to Clinton's husband's infidelities.

These attacks wouldn't be repeated if they didn't resonate with Trump's core voters. And yet to attack Clinton for staying with her husband directly contradicts the beliefs many Trump supporters hold. Dr. James Dobson, founder of Focus on the Family, endorsed Trump for president, calling him a "baby Christian" and noting that the prospect of Clinton as president is scary. Dobson was also a vocal opponent of President Bill Clinton, writing in 1998 that his affairs undermined the morality of the nation. Focus on the Family also offers couples counseling to help them heal and stay together through adultery. The Focus on the Family site states, "God, the Creator of humanity and of marriage itself, has laid out His plan for marriage as a lifelong union."

These beliefs are held close by Trump supporters, who largely identify as Bible-believing Christians. In fact, walk into any church and you will hear cries that marriage is being treated as disposable. And Christians love a good redemption story, beginning with King David: According to the Bible, he committed adultery and had the husband killed. Even so, he was declared a man "after God's own heart." And now, Lisa and Alan Robertson, the evangelical stars of the reality show "Duck Dynasty," are being lauded for pulling their marriage back together from the brink of divorce. Numerous friends and relatives of mine have been counseled to do the same by pastors and Christian counselors, who argue that couples ought to persist in marriages where there has been infidelity, cruelty and worse, because God's call to a lifelong union supersedes all others.

Yet within this tale of marriage and redemption, there doesn't seem to be room for Clinton, who is criticized for doing what Trump supporters tell others to do every day — value the sanctity of marriage. Clinton's reasoning for reconciling with her husband even seems to follow these traditional teachings. In March of this year, Clinton spoke of her faith and marriage at a church in Michigan. She noted that it was her faith that allowed her to forgive her husband, and the example of God's redemption that gave her a pathway to reconciliation.

Divorce is bad, argue Christian leaders, because marriage is forever. And yet, somehow when the Clintons stay together, it's a moral failing.

This hypocritical reasoning highlights the trouble with pulpit-level moralizing of what makes a Christian marriage. Many Evangelical leaders who criticized Bill Clinton's affairs now endorse Donald Trump, who boasted of his own affairs in his book "The Art of the Deal." Writing in the Atlantic, Jonathan Merritt asks, "How exactly do evangelicals reconcile this behavior with claims that they value respect for women?"

The answer seems to fall along party lines. An enduring marriage, even when modeled so solidly by the Clintons, seems to be denied the label of "Christian" — not for lack of faith on the Clintons' part, but for a lack of grace in those who hold them in judgment.

Even more troubling is the insidious assumption that a marriage can be armchair quarterbacked. I've been married 11 years. My husband and I have two children, and I have reevaluated my stance on infidelity since that pre-marital counseling session; not because I agree with Evangelical teachings on the matter, but rather because I don’t believe a person's well-being should be sacrificed for an ideal of what marriage ought to be. My position has changed because I realize that life is long and complicated and so, too, are relationships.

Only those whose lives and loves are wrapped up in a marriage can accurately judge whether it is successful. And it’s not for me, or you, or Donald Trump, to tell Hillary Clinton otherwise.