Donald Trump, racial unifier: Black, white or brown, we have a patriotic duty now to defeat this man

In a debate held not far from Ferguson, Trump spewed his ugly fascist, racist rhetoric — can we unify to stop him? 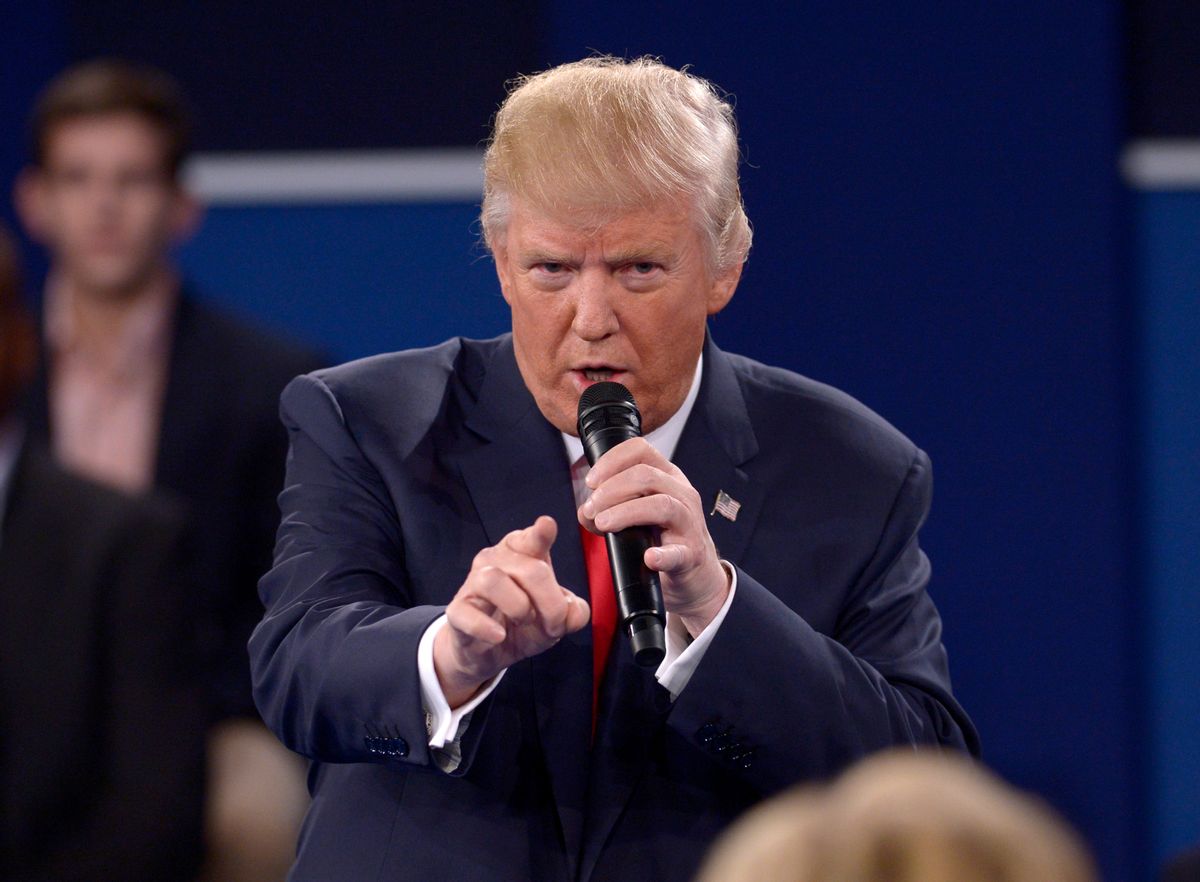 Donald Trump’s acceptance speech at the 2016 Republican National Convention was a nadir in modern American politics. His behavior at the second presidential debate against Hillary Clinton last night in St. Louis was even more monstrous, a shocking spectacle of political ugliness.

As I watched last night’s debate, I was tasked with focusing on how Clinton and Trump spoke to (or did not) questions of race, policing, human rights and justice along the color line in America. These are topics I have written about on many occasions.  The second presidential debate in St. Louis offered no shortage of opportunities for comment.

To wit: Trump was asked about Islamophobia and terrorism. In his answer, he doubled down on how his administration would further harass Muslim Americans and even went so far as to erroneously suggest that they harbor and protect terrorists.

Trump spoke about African-Americans and Latinos as an undifferentiated group when he prefaced his description of them with the word “the." This is a more polite but no less insulting way of calling African-Americans and Latinos “you people.” For Trump and other conservatives, nonwhites are a fixed type of Other in American society, a group outside of the boundaries of “real America.”

To a black man who asked how the candidate would unify the country if elected president, Trump responded that the lives of African-Americans and “inner city” residents (as though the two groups are interchangeable) are horrible and they have nothing to lose by voting for him. This is a repeat of Trump’s racist belief that black folks exist in a dystopian living hell under President Barack Obama and they are idiots with no political agency or intelligence.

Again Trump could not resist, saying that “illegal immigrants” are coming to the United States with the sole purpose of committing crimes against (white) Americans.

Clinton rebuked Trump’s hostility towards Muslims by highlighting how Islam is a part of American culture, history and life — and has been so for centuries. Islam was brought to America by African slaves. This is a little known and much misunderstood part of American history.

The second presidential debate was held at Washington University in St. Louis. This is not too far from Ferguson, Missouri, where a black teenager named Michael Brown was killed by a white police officer named Darren Wilson in 2014. This helped to spark the Black Lives Matter movement. Neither Hillary Clinton nor Donald Trump spoke about the killing of Michael Brown and the political mobilization it helped birth.

Clinton and Trump were also silent on reforming the American criminal justice system and how they would end police thuggery and brutality against people of color, the poor, the mentally ill and other marginalized groups in America.

These are all important issues, however, I will not be writing about them here.

As I watched Sunday night’s debate, I was unnerved and disgusted by Trump’s behavior and the values he channeled. Trump is a political arsonist. Muslims, Hispanics, Latinos, black people and women are the kindling for his fire. That fire threatens, however, to burn down the house that all Americans live in — on both sides of the color line.

All people of goodwill and conscience must help douse the fire — even if their own particular and very real political and social concerns, worries and pain are, for a moment, made secondary to that primary task. Black and brown folks have historically been selfless in the service of defending and improving American democracy. To stop Donald Trump and the poisonous political movement he represents may require that we continue carrying that burden and responsibility. As the late historian Howard Zinn demanded of true patriots, we must be loyal to “the principles of justice and democracy” above all else.

Donald Trump is a fascist.

In keeping with that political philosophy, he promised to put Clinton in prison for the high crime of treason once he wins the presidential election in November. This is a violation of the Constitution and a threat better suited for a Third World despot than the potential leader of the United States and the free world.

In response to recently released video footage of him bragging about sexually assaulting women, Trump dismissed such boorish and disgusting behavior as “locker room” antics. Misogyny and sexism are also central tenets of fascism and authoritarianism.

Moreover, while habitually lying and repeatedly sniffling like he was on cocaine, Donald Trump behaved like a stalker, a pimp or woman beater, walking the stage and menacing Clinton from behind as she spoke. His body language was threatening and disturbing. It was like a horror movie.

He seemed to enjoy playing the role of a bully against a woman before an audience of many tens of millions of viewers in the United States and around the world. His predatory behavior was sickening and unnerving: It proved every concern about his temperament and personality was well-founded.

Trump’s comportment at last night’s presidential debate was vexing and disorienting. It is not clear if this was by design, merely a function of his personality and broader temperament or some combination of the two.

For a potential answer, one must not overlook Trump’s admiration for the Russian autocrat and leader Vladimir Putin.  Documentary filmmaker Adam Curtis explained this in a segment that aired on the BBC in 2014 as:

So much of the news this year has been hopeless, depressing, and above all, confusing. To which the only response is to say, "oh dear."

What this film is going to suggest is that that defeatist response has become a central part of a new system of political control. And to understand how this is happening, you have to look to Russia, to a man called Vladislav Surkov, who is a hero of our time.

Surkov is one of President Putin's advisers, and has helped him maintain his power for 15 years, but he has done it in a very new way.

He came originally from the avant-garde art world, and those who have studied his career, say that what Surkov has done, is to import ideas from conceptual art into the very heart of politics.

His aim is to undermine peoples' perceptions of the world, so they never know what is really happening.

Trump’s hypnotic appeal for the human deplorables he commands draws power from vacuous celebrity culture, white racism, fears about globalization and cosmopolitanism, anxieties about death and the empty siren song of  “patriotism” and “nationalism” for bigots who are terrified of a country where to be “free, white, and twenty-one” is no longer sufficient to guarantee automatic success. Trump’s control over his minions is also rooted in an ability to create confusion and rage leaving him as their last and only hope.

Voting against him is our last and only hope. Donald Trump must be stopped. It is the obligation of every fair-minded and truly patriotic American to unite in doing so on Nov. 8, 2016.