Donald Trump's scorched-earth debate: The Republican nominee is going down, and he'll take Hillary Clinton with him

Sunday's debate was a desperate dive into the political sewer, airing every crazy anti-Clinton conspiracy theory 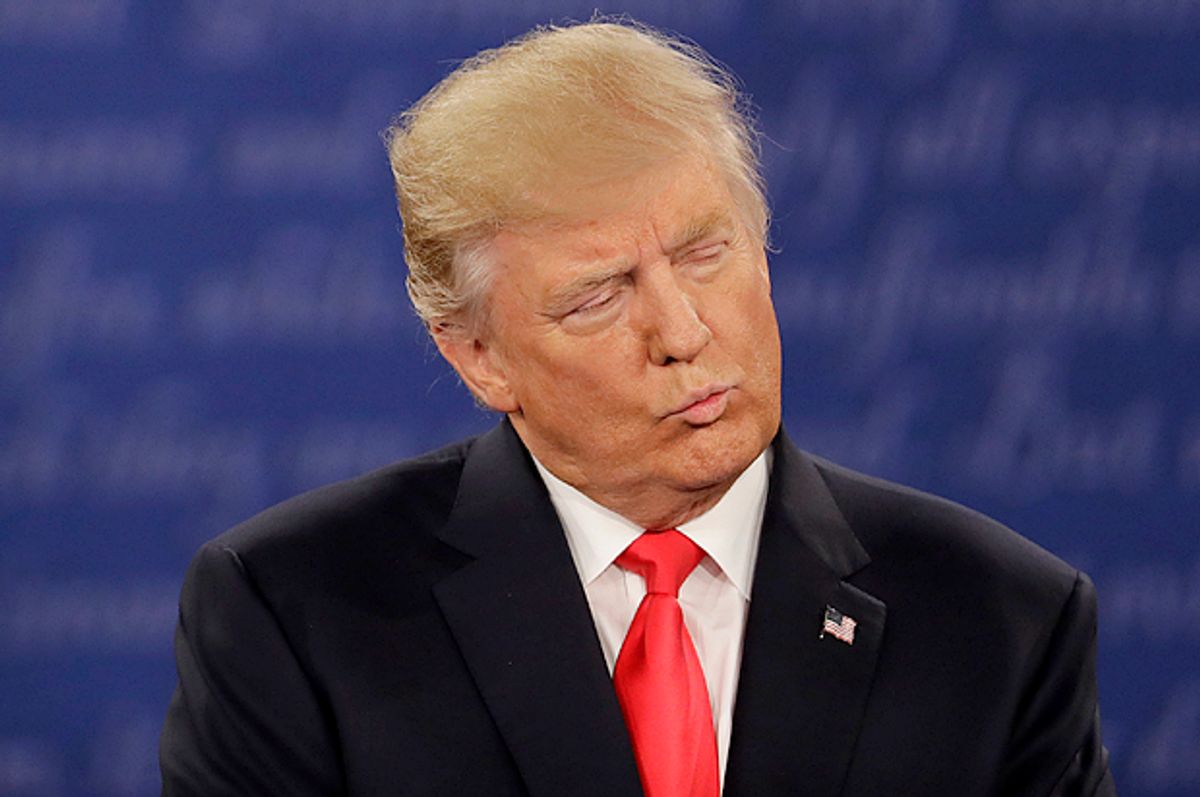 Let us be clear about what we witnessed on that Washington University stage in St. Louis on Sunday night. It was not a debate. It was primal-scream therapy for the denizens of the right-wing fever swamps, who are watching Democrat Hillary Clinton and her alleged trail of criminality slip through their clutches again.

They have been waiting 25 years for someone to put her in the dock and prosecute every tinfoil-hatted conspiracy theory that they have ever dredged from the depths of their minds. In Republican presidential nominee Donald Trump, they finally had their cut-rate, tangerine-tinted Inspector Javert.

Finding a credible sucker to play that part has been a dream of the right since the 1990s, from the Whitewater to Travelgate, Filegate and Monica Lewinsky through private email servers and the Clinton Foundation scandals. But every scandal seemed to fizzle out to nothing. Not because of a lack of evidence but because someone else was working to suppress it: the liberal media that is always covering for the Clintons or scheming Democrats or Republicans who don’t have the stomach for a real fight.

Through all the setbacks, those on the right have never lost sight of one given: Hillary Clinton is a criminal who should be in prison. The never-ending pursuit to prove this inarguable fact, to find the as-yet-undiscovered proof hidden away out there that will finally reveal for all the world the Clintons’ perfidy long ago drove them all stark raving cuckoo bonkers.

But now they have Trump, a half-bright dupe who's willing to crawl into the sewers where the darkest creatures of American politics live, to find and drag onto a debate stage in front of millions of viewers every long-discredited supposed act of venality by the Clintons, to be litigated in two-minute chunks.

That was what we heard on Sunday night. Every right-wing complaint from 25 years of feeling that their beliefs about the Clintons were ignored and marginalized, every gripe about an indifferent or biased media that didn’t care about something important — it all got an airing.

Hillary Clinton’s supposed incompetence that resulted in people being killed at Benghazi? The hell with the nine congressional investigations that have absolved her of every charge from the fever swamps. Trump brought them back, repeating a lie that ambassador Chris Stevens had sent hundreds of requests for help to her during the attack and was ignored.

And the history of sexual peccadillos for Hillary's husband? Trump gave ringside seats to three women who had long ago accused the former president of misconduct. Never mind that these cases were adjudicated in the legal and public-relations spheres decades ago or that Bill Clinton isn’t the one running for president. Those women were there, which must have been humiliating to Hillary, and that was the point.

The low point was Trump’s promise that when he wins the presidency, he will have his attorney general appoint special prosecutors to investigate Clinton and her alleged criminality. You could practically hear the boisterous cheers from the fever swamps.

Has a major presidential candidate ever before promised to use the power of the state to destroy and imprison his political opponent? For the right, it’s a given that this is what happens all the time when Democrats are in power. (See Obama, Barack and IRS scandal.) Finally, many of them might have thought, it’s payback time.

That much of this pursuit of the Clintons is politically motivated, that the GOP might have been playing the party's base for suckers all along — in order to earn its loyalty and votes election after election — never occurs to the true believers. Now the Republican Party has lost control of this monster that it has nurtured and fed for decades. The mob demands justice, and Trump has promised to deliver it at last. Even if it means a landslide defeat in November.