From the Michael Myers body language to the Iraq War lies and "the Latinos, the Hispanics," Twitter takes on Trump 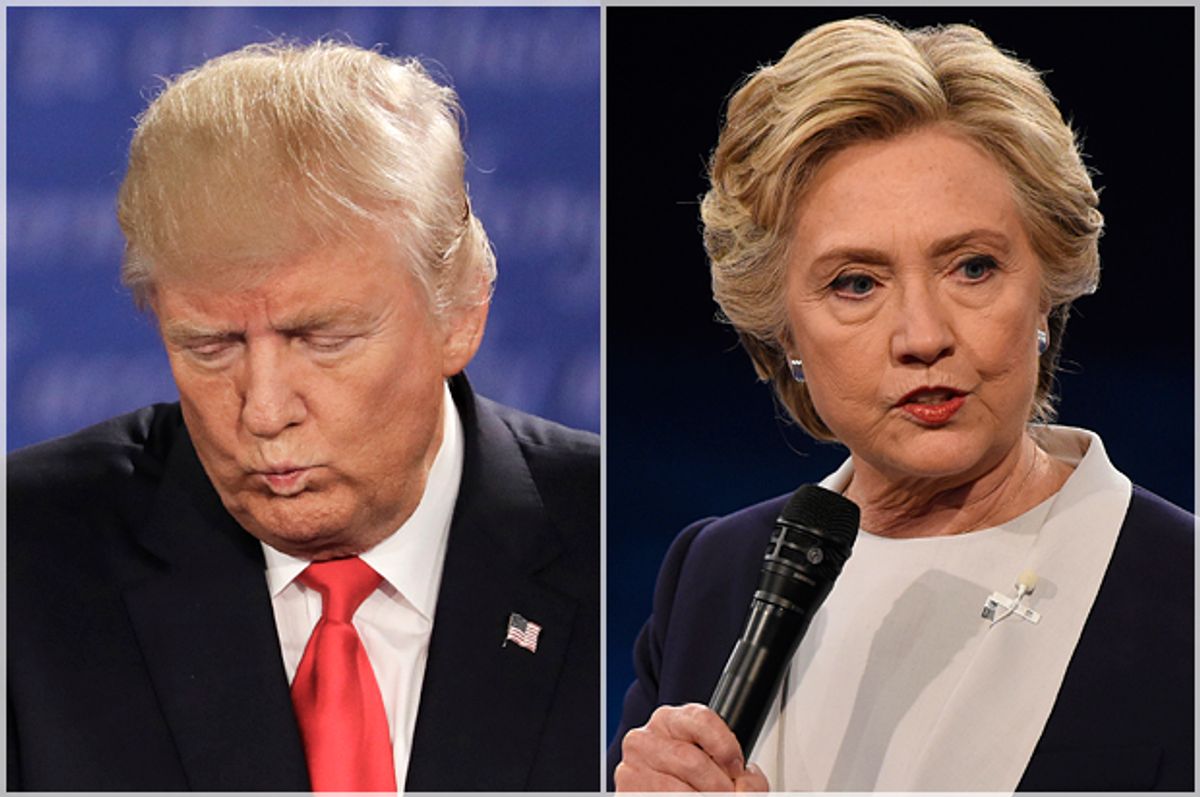 The second presidential debate between Democrat nominee Hillary Clinton and Republican nominee Donald Trump wasn’t just thoroughly unpleasant to watch. It was one of the ugliest political moments in recent memory.

We knew things were going to get nasty when Trump held a pre-debate press conference flanked by three women who have accused Bill Clinton of sexual misconduct (Juanita Broaddrick, Kathleen Willey and Paula Jones). In a normal election, that act alone would have dominated the news cycle, regardless of what followed. In the 90-minute exchange between Clinton and Trump, however, Trump repeatedly lied, bullied and fearmongered his way across the stage.

Before the debate even ended, Trump’s campaign manager Kellyanne Conway felt the need to send out a tweet preemptively claiming the media would “spin” Trump’s lurking behind Clinton into a major story. Unfortunately for her, the denizens of Twitter didn’t need the media to draw attention to this fact. Whether pointing out its abusive undertones or just ridiculing the creepiness of it all, Twitter users were correct in identifying Trump’s body language and nervous pacing as highly problematic. At a time when the Republican desperately needed to project strength and confidence, he instead came across as restless and aggressive. The optics were terrible for him, particularly when contrasted with Clinton’s comparative poise.

Within just a few minutes Trump managed to say offensive things about African-Americans, Latinos and Muslims

This is pretty much a perfect symbol for Trump's campaign as a whole. The debate wasn’t the first time that Trump referred to racial minorities with a definite article — such as when he says things along the lines of having “a great relationship with the blacks.” That said, it was particularly conspicuous, and Twitter repeatedly noticed the demeaning subtext in Trump’s constant use of “the” before talking about African-Americans and Latinos.

He also repeated a well-worn Islamophobic lie about the San Bernardino attack (namely, that many people saw bombs in the attackers' household) and then blamed Muslims for not reporting more on each other.

While Trump has repeatedly claimed that we should focus on his actions rather this words, demeaning racial minorities and perpetuating pernicious stereotypes is a form of action. If the mainstream media doesn’t follow Twitter’s lead and make an issue out of this in the upcoming news cycle, it will be grossly derelict in its duties.

Trump lied again about his past positions on the Iraq War

It’s the lie that will not die. No matter how decisively it has been debunked — even with audio recordings from 2002 (before we invaded Iraq) in which Trump clearly tells radio host Howard Stern that he supported the war — the GOP candidate refuses to abandon his bogus claim.

Yet even as he praised Twitter during the debate as an effective tool for communicating, the Twittersphere was heaping opprobrium on Trump for once more trying to convince voters that he had opposed the Iraq War from the very beginning. The bad news is that, if repeatedly being caught in this lie hasn’t hurt him so far, chances are it won’t be considered newsworthy now.

Nevertheless, the truth still matters for its own sake, even when it doesn’t shift the course of elections as it should. It’s refreshing to know that while Trump may be fooling some Americans with his dissembling, many others aren’t falling for it.

I’m not sure there was a way for Trump to salvage his campaign after video leaked of his braggadocious remarks about sexual assault. That said, it certainly was not appropriate for him to dismiss those comments as “locker room talk” ... or, for that matter, to avoid even denying that he’d committed sexual assault until he was asked three different times. All these things not only made Trump look callous, but gave the appearance that there may indeed be more lurking beneath the surface of this story. The only person who came out of this exchange looking good was moderator Anderson Cooper, who tenaciously held Trump’s feet to the fire even when the candidate tried to change the subject (most bizarrely, by engaging in a little anti-ISIS tough talk).

Did Trump really just throw his own running mate under the bus?

Yes, he did. When moderator Martha Raddatz of ABC observed that Republican vice presidential nominee Mike Pence wants to attack Syria, whereas Trump wants to work with Russia in Syria, Trump replied, “He and I haven’t spoken, and I disagree.” This open break with his running mate is plenty disrespectful in its own right, but it also comes at a time when Pence is being discussed as a possible replacement for Trump as the GOP’s presidential candidate and when Trump has, according to sources, expressed jealousy of Pence’s superior debate performance.

In short, Trump’s casual humiliation of his would-be vice president reeks of bitterness and resentment, and Twitter reacted with predictable shock and dismay. Pence may be publicly congratulating Trump, but one has to wonder how he’s feeling in private right now.

Trump admires Russian President Vladimir Putin, and when he threatened to send Clinton to prison, he sounded like a despot himself

Trump’s bullying body language may have been creepy, but his vow to throw Clinton in prison if elected president was downright sinister. There is no precedent in American presidential politics for a major party’s candidate threatening his chief rival with incarceration. There is a crucial difference between ordinary citizens saying that Clinton should be jailed for her use of a private email server and hearing those same words from the politician who stands to gain the most from that happening.

If Twitter, common sense and basic human decency are any indication, Trump decisively lost the second presidential debate. Clinton’s performance wasn’t particularly memorable — she was competent but did not say or do anything that really stood out — but she didn’t need to make a grand play in order to win. All she had to do was hold her own and let her opponent push the self-destruct button and demonstrate why he shouldn’t be entrusted with power. She did that in spades on Sunday night.