Even Andy Cohen needed a shower: Watch what happens when Donald Trump turns a presidential debate into a reality TV nightmare 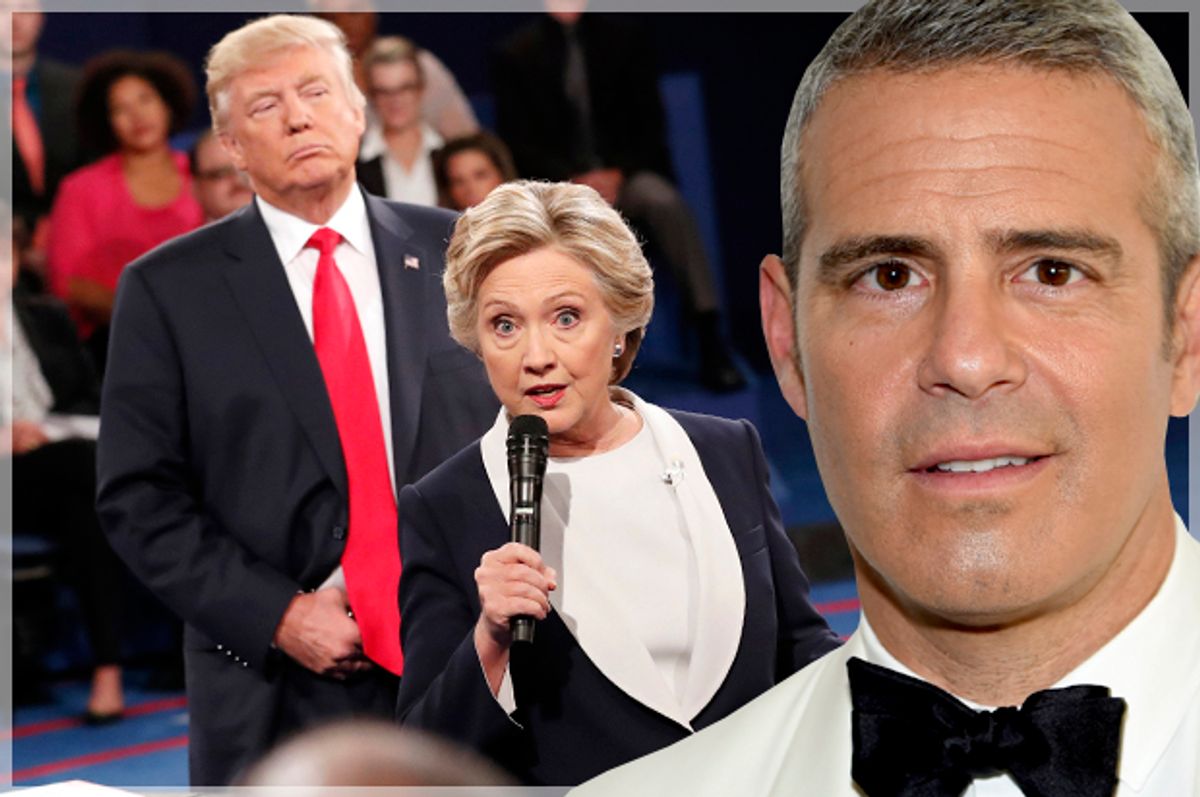 It was not until after Sunday’s second presidential debate that the full weight of what millions of Americans had been subjected to pressed down on me, and only after I’d happened to come across a Tweet shared by Christa Dubill, an anchor for Kansas City NBC affiliate KSHB-TV.

Dubill crossed paths with a weeping woman who consented to an impromptu interview about why she was upset. The woman identified herself as an abuse survivor who wanted to speak to one of Donald Trump’s surrogates about how “she could defend a man who makes comments that embody rape culture and perpetuate sexual assault,” referring to Trump’s comments in an “Access Hollywood” video made public on Friday.

“She was very dismissive and condescending, as if this isn’t a real concern,” the woman continued, pausing to choke up. Dubill later asked if she knew the name of the representative in question. “It was, um, an African-American woman . . . Umma-Ross-a? I don’t . . . do you know who that is?”

Sadly, yes. She’s likely referring to Omarosa Manigault, the director of African-American outreach for Trump’s campaign and a former contestant on “The Apprentice.” The NBC reality series is widely considered to be the true launching platform for Trump’s political career, but it also gave Manigault a long career as one of unscripted television's most famous villains.

My immediate reaction, one entirely informed by Manigault’s reality TV persona, was to wish Dubill had pointed out that expecting Manigault to be empathetic makes about as much sense as seeking a comfort from a succubus.  But that thought also clarified the essential awfulness of the second presidential debate.

Trump’s association with “The Apprentice” has been widely cited to explain his popularity. But Sunday’s town hall represented a specific hijacking of political decorum and the debate format itself. Two weeks’ worth of tabloid-esque teasing by Trump’s camp resulted in a town hall throw down that had the salacious feel of an episode of “The Bachelor: The Women Tell All” or a reunion chapter in Bravo’s “Real Housewives” franchise. It was pure reality television, as opposed to a vital debate of ideas geared to serve the public's interest.

I'm not the only one to notice this.

“I want to say that it was fun watching the debate with you,” Andy Cohen, host of Bravo’s “Watch What Happens Live,” said to his guests Colin Jost and Michael Che during last night’s episode. “But I actually feel grosser than I did after, like, a day of shooting the ‘Jersey Housewives’ reunion last week.”

Think about that for a moment: Sunday's debate made the man who has instigated and refereed confrontations between some of television's most ridiculous egomaniacs feel dirtier than he does on his day job.

Trump’s campaign had promised to focus upon former president Bill Clinton’s extramarital affairs and questionable legal difficulties as a means of throwing off balance Democratic nominee Hillary Clinton. But few were prepared for Sunday afternoon’s pre-debate media bushwhacking, featuring four women, including three who had previously accused Bill Clinton of sexual misconduct declaring their allegiance to Trump. (Never mind Trump had previously described one of them as “unattractive” and “a loser.”)

Juanita Broaddrick, Paula Jones and Kathleen Willey, in addition to Kathy Shelton, who accused a man of sexual assault who was defended by Hillary Clinton early in her legal career, attended the town hall debate. If Trump’s camp had gotten its way, they would have been seated in the family box, putting them closest to the stage.

Reality producers use this same tactic during reunion shows to boost the dramatic quotient of these episodes, goading the jilted contestants into spiky confrontations that make the central contenders squirm in their chairs. This is the reason people tune in to the bonus rounds of reality shows, after all; they want to see some semblance of true behavior cracking through the polished artifice. They want to watch what happens.

That may explain why it was difficult for Hillary Clinton to effectively emerge on top in St. Louis on Sunday night. Substantively speaking, she came across as better informed and more skilled at illuminating her policy issues and discussing her 30 years of public service. But her efforts to place the leaked excerpts of her paid Wall Street speeches into context landed awkwardly, which would have been less harrowing to her overall performance if not for Trump’s intentional injection of lowbrow personal drama into the hall.

From the moment the candidates stepped onstage and did not shake hands, viewers got the hint that there was no love lost between these two. That Broaddrick, Jones, Willey and Shelton were physically present added a peripheral psychological vibe to the proceedings, perhaps leading viewers to assign each of Clinton’s micro expressions additional significance.

During Trump’s comparison of his statements in Friday’s leaked 2005 "Access Hollywood" video (where he bragged about sexually assaulting women) to various accusations of Bill Clinton over the last four decades, Hillary Clinton’s attempt at a poker face nevertheless registered annoyance. Under normal circumstances this would be expected and acceptable.

She’s a female candidate facing down a man who boasted that, with the assistance of a few minty Tic Tacs, his star power allowed him to grab women by the genitals without consent. The Clintons also have had personal interactions with the Trumps. Chelsea Clinton is friends with Donald Trump's daughter Ivanka, and Hillary and Bill attended Donald's wedding to current wife Melania.

But signs of female fury or bitterness are catnip to reality reunion viewers who tune in hoping for physical confrontations or overturned tables. That Hilllary Clinton, who has always been held unfairly to a nearly impossible higher standard in terms of her on-camera appearance, looked visibly defensive at various points over the debate’s 90 minutes may not have played in her favor when consumed with a reality TV eye. As she masked her reactions to Trump’s “Housewives” style of emotional warfare, I wondered if she wasn’t having some version of an internal dialogue about feeling ambushed.

Then again, Trump didn’t definitively win the reality-framed optics war by any stretch of the imagination. If anything his strategy to bring the battle to an arena he’s more familiar with only brought the evening’s overall lack of dignity into greater relief. Stills of the Republican candidate menacingly glowering behind Clinton as she spoke or, worse, appearing to hump his chair became internet memes long before the debate closed. His incessant pacing about the stage, and his jutting out his chin as he prepared to rebut her statements, made him look petulant.

And it was Trump, not Clinton, who gave viewers that night's equivalent of a furniture-throwing tantrum by becoming the first American candidate for president to declare that he would jail his opponent if he won office.

If Trump were hoping that the town hall’s moderators, CNN’s Anderson Cooper and ABC’s Martha Raddatz, would behave a bit more like fabled reunion-show hosts Andy Cohen or Wendy Williams, Raddatz made it abundantly clear that she had no intention of letting that occur. Moderators cut off Trump 30 times and Clinton 22 times in an attempt to get to as many questions as possible from the town hall participants, and at one point Trump audibly complained, “It's nice — it's one on three.”

As I have previously written, moderating debates is a tough if not impossible job, particularly debates in which the opponents are such poisonous rivals. But the difference between Matt Lauer’s enabling style, exercised to terrible effect in the presidential forum, and Raddatz and Cooper’s strict devotion to the night’s intended format was remarkable and welcome.

Cooper and Raddatz’s noble if jagged efforts to maintain the forum’s dignity were stilted, however, by the embarrassing tenor that Trump’s campaign imposed upon the telecast.

It may have created television worth talking about, albeit in somewhat wretched terms, but the losers were voters like Dubill’s interview subject — people who wanted firm answers about difficult social issues and policies that affect our lives and, instead, were greeted by hijinks and tactics worthy of a challenge captained by Omarosa.