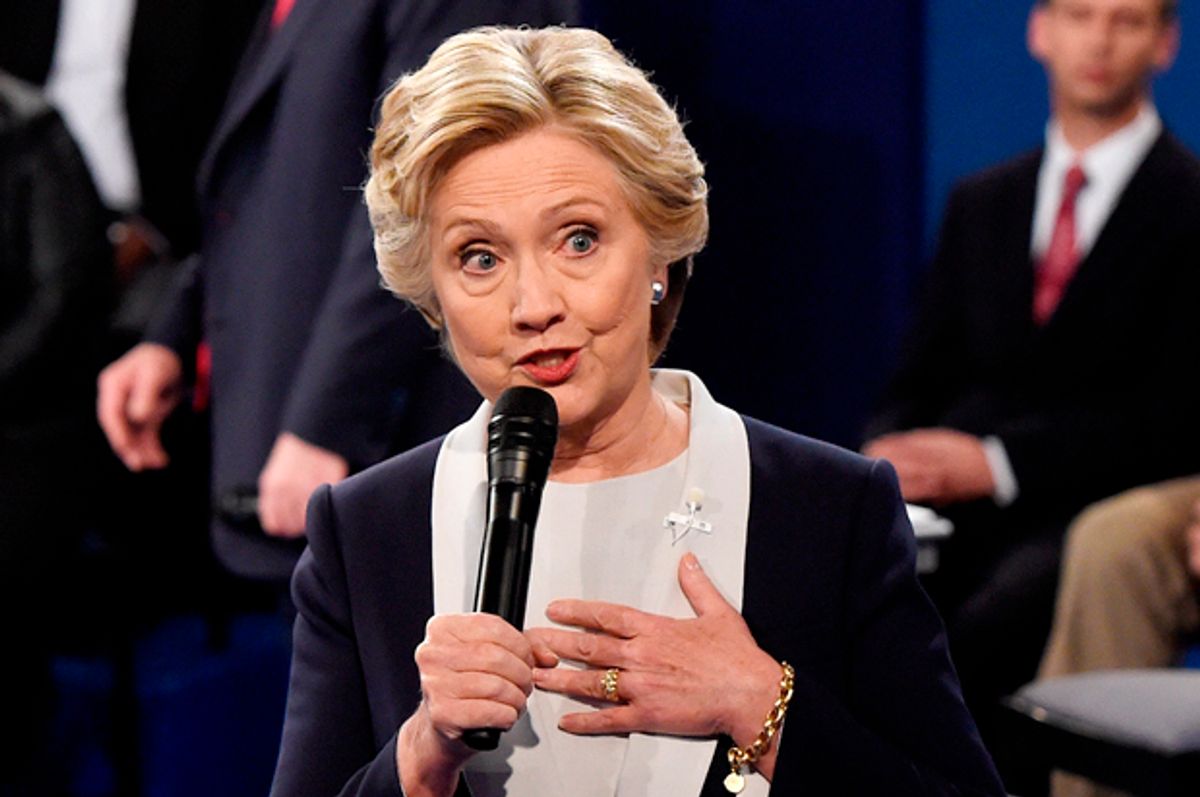 Sunday night's presidential debate featured so many surreal, uncomfortable and flat-out unnerving moments that if you couldn't stomach staying till the bitter end, no one could question your judgment or self-preservation. But if you did hang in there, you saw that the bitter end wasn't so bitter at all. Instead, the debate concluded on a deliberately upbeat note, thanks to a hopeful undecided voter named Karl — and the candidates' telling responses.

Just as an evening in which Donald Trump brushed off his crude brags of kissing and grabbing women as mere "locker room talk," vowed to throw his opponent in jail and appeared to consciously uncouple from his own running mate seemed to be winding down at long last, moderator Martha Raddatz warned, "We’ve sneaked in one question," and a collective groan seemed to rise up out of the soul of America. But then a man named Karl Becker posed a simple challenge.

"My question to both of you," he asked, "is regardless of the current rhetoric, would either of you name one positive thing that you respect in one another?" It was a stunning moment, the capper of an evening that began with the two adversaries pointedly not even shaking hands and Trump spending his non-ranting moments lurking behind Hillary Clinton menacingly. Raddatz responded by asking, "Mr. Trump would you like to go first?" But too bad, because Clinton was ON IT.

"I certainly will because I think that is a very fair and important question," she said, as she wound up for her reply. She didn't then praise him as as astute businessman because after all, she's spent a lot of her campaign popping that balloon. She didn't laud his savvy, his acumen, or even his experience as a media personality — all things that Trump crows about incessantly.

Nope, instead she said, "Look, I respect his children. His children are incredibly able and devoted, and I think that says a lot about Donald. I don’t agree with nearly anything else he says or does. But I do respect that and I think that is something that as a mother and a grandmother is very important to me." Then just to drive home her own message, she added, "I’ve spent 30 years, actually maybe a little more, working to help kids and families, and I want to take that experience to the White House and do that every single day."

This was not just a tactful answer to a question about a man who up to and including the moments right before the debate has actively degraded her and her family. It was a brilliant, table-turning response to the way that working mothers are perpetually framed in their careers, where they're assessed not just for themselves but their spouses and their offspring.

For the coup de grace of the evening, after Clinton answered the question, Trump, now effectively mom-blocked by his opponent, had to come up with his own citation of something positive. And here he gave the most seemingly authentic response of the night.

After concurring that his children are "wonderful," he then conceded, "I will say this about Hillary. She doesn't quit. She doesn't give up. I respect that. I tell it like it is. She's a fighter. I disagree with much of what she's fighting for. I do disagree with her judgment in many cases. But she does fight hard, and she doesn’t quit. And she doesn't give up, and I consider that to be a very good trait." This, coming from the man who at the first debate insisted she "doesn't have the stamina" to be president, was quite an admission.

Women who have both children and ambition are constantly expected to qualify their aspirations in terms of their motherhood. They are repeatedly called upon to clarify that while their work matters, motherhood is their "real" job — forcing a pernicious and unfair equivalence of family and career.

So there stood Clinton on Sunday night, proudly acknowledging her motherhood and grandmotherhood, yes, but also pointing to a man who had reportedly called an attorney "disgusting" for needing to pump breast milk. A man who's described pregnancy as "a wonderful thing for the woman, it's a wonderful thing for the husband, it's certainly an inconvenience for a business. And whether people want to say that or not, the fact is it is an inconvenience for a person that is running a business."

A man who has boasted about not changing diapers, saying, "There’s a lot of women out there that demand that the husband act like the wife. . . . I mean, I won't do anything to take care of them. I'll supply funds and she'll take care of the kids. It’s not like I’m gonna be walking the kids down Central Park." A man whose former wife Marla Maples earlier this year described as "a good provider with education and such, but as far as time, it was just me."

Clinton knows all of that. She knows Trump's whole track record when it comes to parenting. And on the spur of the moment, she managed to come up with an answer to not just the question but to his political party that works forcefully and continually to strip away women's reproductive rights and obstructs their demands for equal pay. So she answered for every woman who has been judged professionally for who she is personally, whose career competence is assessed through the prism of her childbearing.

You know what's respectable about Donald Trump, she asks? You know what his truest value is? It's just the issue of his loins.