State Dept. lawyers warned that U.S. might be complicit in Saudi war crimes in Yemen — but arms deals continued

Report: Internal records show officials were worried that U.S. might be implicated in Saudi atrocities in Yemen 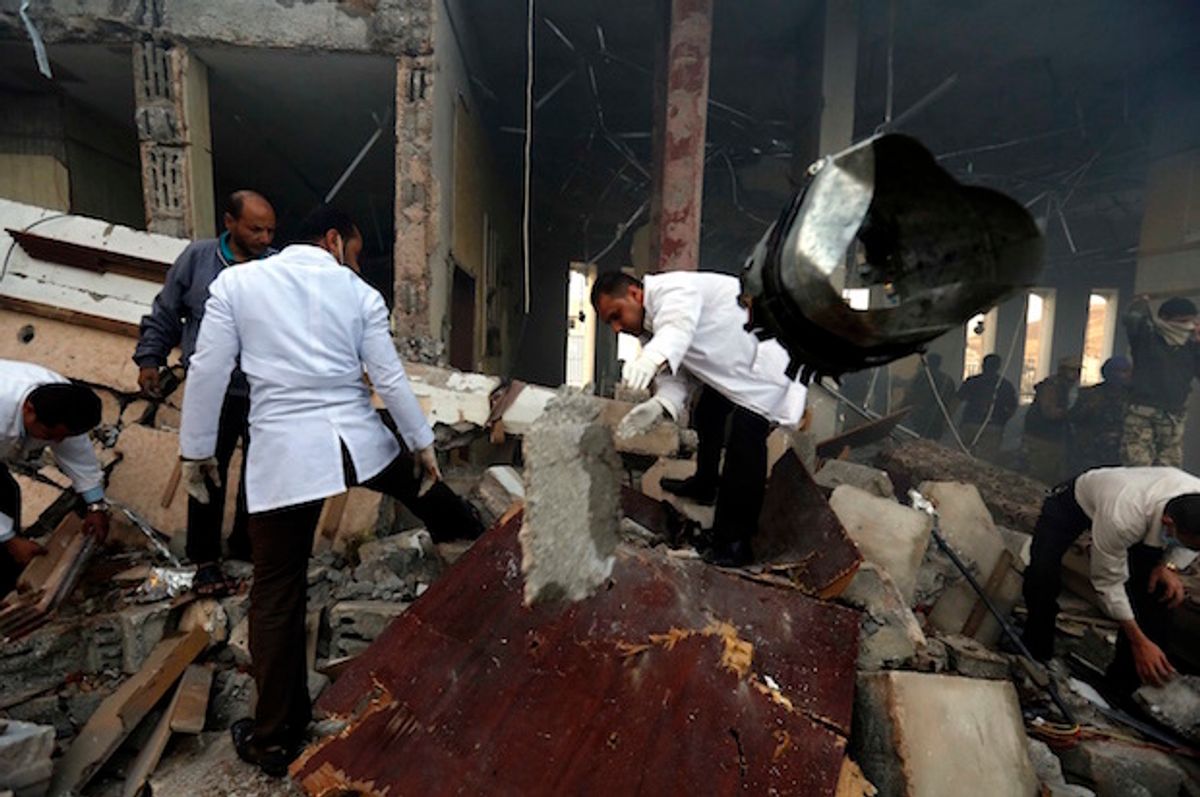 Medics search for bodies under the rubble of a funeral hall that was bombed by the Saudi-led coalition in Sana'a, Yemen on Saturday, Oct. 8, 2016 (AP/Osamah Abdulrhman)
--

Government lawyers warned officials that the United States might be implicated in Saudi war crimes in Yemen, according to internal records obtained by Reuters. Yet the Obama administration continued to sell billions of dollars worth of arms to Saudi Arabia anyway.

For 19 months, a Saudi-led coalition of Middle Eastern countries, armed and supported by the U.S. and the United Kingdom, has been bombing Yemen, the poorest country in the Middle East.

A January 2016 email shows that Deputy Secretary of State Antony Blinken held a meeting with U.S. officials in which they discussed "options to limit U.S. exposure to LOAC (Law of Armed Conflict) concerns" in the war in Yemen, according to his email.

As the war progressed, with the Saudi-led coalition killing more and more Yemeni civilians and human rights organizations warning that the United States could be complicit in war crimes, a U.S. official told Reuters that State Department lawyers "had their hair on fire."

Multiple officials acknowledged to Reuters that the U.S. might be a party to the war in Yemen under international law not just because of its massive weapons sales to Saudi Arabia but also because the U.S. has provided tens of millions of pounds of fuel to coalition planes in more than 1,000 refueling sorties and given logistical support to the coalition air force.

More than 10,000 Yemenis have been killed in the war, including roughly 4,000 civilians, according to the United Nations. More than 14 million Yemenis, more than half of the country's population, are going hungry, in what the U.N. has called one of the worst humanitarian catastrophes in the world.

The Western-backed coalition is fighting Yemen's Houthi rebels and allied militias that support former Yemeni president Ali Abdullah Saleh. The U.N. has reported that the Saudi-led coalition is responsible for nearly three-quarters of civilian deaths, whereas Yemeni rebels have been responsible for less than one-fourth.

On Saturday, the U.S.-armed coalition bombed a funeral in Sanaa, Yemen's capital, killing more than 140 people and wounding at least 525 more, according to the U.N. A rescuer described the horrific scene as "a lake of blood." Sanaa Mayor Abdul Qader Helal was killed in the attack, and thousands of Yemenis flooded the streets of the capital on Monday for his funeral.

The Saudi-led coalition denied responsibility for the bombing, but no other party in the war in Yemen, such as the Houthi rebels, has planes. The U.N. harshly condemned the attack, as did Oxfam, which called it a "massacre of civilians."

Yet Reuters' investigation shows that, despite American officials' public rhetoric, the U.S. government has been well aware of the legal ramification of its support for the Saudi-led coalition and nevertheless continued to back it.

A senior U.S. official acknowledged to Reuters, "If we’re going to be supporting the coalition, then we have to accept a degree of responsibility for what’s happening in Yemen and exercise it appropriately."

Yet U.S. government lawyers ultimately did not determine whether U.S. support for the Saudi-led bombing campaign would make the U.S. a "co-belligerent" in the war under international law. If they had, the U.S. would have been obligated to investigate war crimes allegations, potentially putting its military officials at risk of prosecution.

For months, human rights groups have been warning precisely this. Human Rights Watch reiterated in a report two days before the funeral massacre that American support "makes the U.S. a party to the armed conflict, and potentially culpable in unlawful strikes."

Priyanka Motaparthy, senior emergencies researcher at Human Rights Watch, wrote, “Despite rising outrage over the bloody civilian toll in Yemen’s war, the United States administration is showing no signs of breaking with — or attempting to check — the actions of its ally Saudi Arabia” and accused the U.S. of “making excuses” for the atrocities committed by Saudi Arabia.

Western allies of Saudi Arabia, including the U.S. and U.K., have blocked multiple U.N. attempts to establish an independent investigation of war crimes in Yemen.

Reuters various departments of the government held conflicting views. The Pentagon and the State Department's Near East affairs bureau have insisted on maintaining a close relationship with Saudi Arabia, whereas the State Department's Office of the Legal Advisor was concerned about U.S. complicity in Saudi atrocities in Yemen.

A U.S. government email obtained by Reuters cited a 2013 ruling from a U.N.-backed war crimes trial finding that a country can be found liable for war crimes for "practical assistance, encouragement or moral support." Direct, physical involvement is not necessary.

The U.S. used this same ruling to claim that detainees held at the Guantánamo Bay prison were complicit in al-Qaida's 9/11 attacks.

In an October 2015 meeting with human rights groups, a State Department specialist in protecting civilians in armed conflicts acknowledged that the Saudi-led coalition was committing atrocities. The specialist blamed the heavy civilian toll on "a lack of Saudi experience with dropping munitions and firing missiles."

Human Rights Watch researcher Motaparthy stressed, "This belief strains credulity." Even if it is true, she said, "Whether Saudi targeteers were malicious or simply poorly trained does not absolve the government of responsibility."

Reuters' investigation found that U.S. officials have repeatedly said they tried to reduce civilian casualties by giving the Saudi-led coalition "no-strike lists" with targets to avoid and urging it "to exercise the utmost diligence in the targeting process and to take all precautions to minimize civilian casualties and damage to civilian infrastructure."

The U.S. has also called for peace talks to halt the violence. A tepid cease-fire between the coalition and Yemeni rebels broke down in August, followed immediately by an onslaught of airstrikes that killed scores of civilians.

Despite concerns inside the U.S. government about civilian casualties, the U.S.-backed coalition has continued to pummel civilian infrastructure in Yemen. The main bridge in Yemen used as a supply route for humanitarian food aid was bombed by the coalition. A U.S. official said this bridge was on a no-strike list provided to Saudi Arabia.