What Columbus Day really celebrates: The "most massive act of genocide" in world history 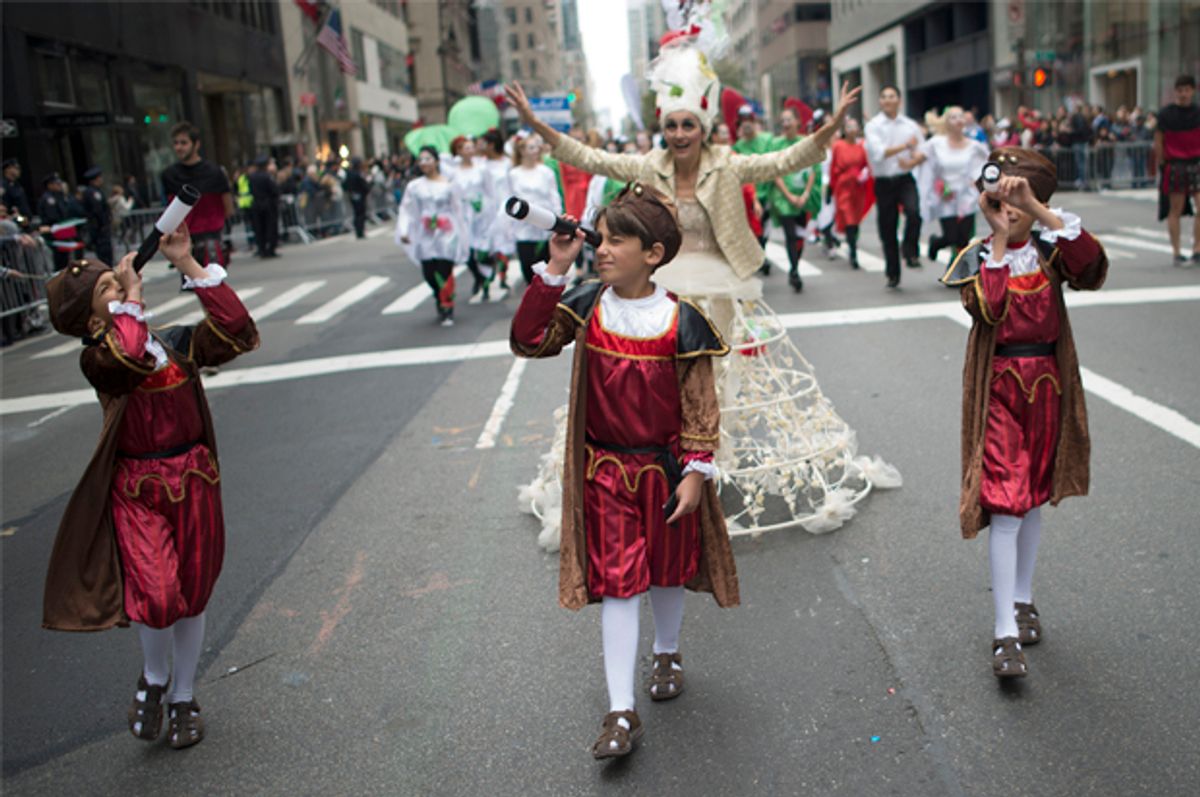 "In 1492, Columbus sailed the ocean blue," goes the children's rhyme. A popular version of the song continues:

'Indians! Indians!' Columbus cried;
his heart was filled with joyful pride . . .
The Arakawa natives were very nice;
they gave the sailors food and spice.
Columbus sailed on to find some gold,
to bring back home, as he'd been told.
He made the trip again and again,
trading gold to bring to Spain.
The first American? No, not quite.
But Columbus was brave, and he was bright.

These bubbly lyrics stand in stark contrast to what Christopher Columbus himself said. When the European colonialist arrived to the so-called New World in 1492, he was greeted with gifts by the indigenous Taíno people — most of whom would be dead in 50 years. Columbus later wrote in his journal of the native population:

They took all, and gave what they had with good will. . . .
They neither carry nor know anything of arms. . . .
They are all of fair stature and size, with good faces, and well made. . . .
They should be good servants.  . . .
The people are very docile . . . with fifty men they can all be subjugated and made to do what is required of them.

Columbus Day might be a federal holiday in the United States, but it marks the onset of one of the worst crimes in all of human history. In fact, some experts, such as American historian David Stannard, have called Columbus' arrival the beginning of the largest genocide ever.

"The destruction of the Indians of the Americas was, far and away, the most massive act of genocide in the history of the world," Stannard wrote in his book "American Holocaust: Columbus and the Conquest of the New World."

"Within no more than a handful of generations following their first encounters with Europeans, the vast majority of the Western Hemisphere's native peoples had been exterminated," he explained.

Stannard estimated that roughly 95 percent of the indigenous peoples living in the modern-day Americas died after the beginning of European settler colonialism.

"What this means," he added, "is that, on average, for every 20 natives alive at the moment of European contact — when the lands of the Americas teemed with numerous tens of millions of people — only one stood in their place when the bloodbath was over."

Many Native Americans were killed in bloody massacres, yet the majority died from diseases introduced by European settlers and from forced labor. Colonialists enslaved Native Americans and forced them to work in deadly conditions on large plantations and in mines, where they extracted minerals like gold, silver and copper, enriching the European empires that profited from mass extermination in the newly developing capitalist economic system.

As large numbers of Native Americans died, European colonialists sent enslaved Africans across the ocean to replace their labor.

Stannard, a professor of American studies at the University of Hawaii, has identified many chilling parallels between the genocide of indigenous peoples and the Nazi Holocaust, another of the worst genocides in human history.

Many of the same crimes against humanity committed by the Nazis in the Holocaust also "prevailed in the so-called New World — from the West Indies to California — where millions of indigenous people died from forced labor, starvation and disease that were a direct consequence of military invasion, enslavement and systematic mass murder," Stannard noted.

Stannard's death figures are higher than those calculated by some other experts, and some scholars have criticized his research, saying that millions of Native Americans died from diseases that might not have been purposefully spread. Stannard has forcefully rejected this "indirect death" argument, noting that the majority of people killed in Nazi concentration camps like Auschwitz died from forced labor, starvation and disease, as was the case for millions of Native Americans.

Even Stannard's critics agree that “the acts of barbarism committed by conquerors and settlers, whether in Iberian or British America, are so horrific as to be mind-numbing, even for a generation that has lived through the experiences of the 20th century.”

Colonizers carried out ineffably brutal crimes in their campaign of conquest in the Americas. "Dum Diversas," a 1452 papal bull, or document issued by the pope of the Roman Catholic Church, authorized colonialists "to invade, search out, capture, vanquish, and subdue all . . . enemies of Christ wheresoever placed, and . . .  to reduce their persons to perpetual slavery." European settlers did all this and more.

Bartolomé de las Casas, a Spanish Catholic priest who renounced his brethren's genocidal crimes and subsequently became an outspoken opponent of colonial violence and slavery, wrote of how European invaders "rode the backs of Indians if they were in a hurry" and "thought nothing of knifing Indians by tens and twenties and of cutting slices off them to test the sharpness of their blades."

These were just some of the more tame atrocities; the others are almost too horrific to write. Fearing the colonial violence, some indigenous "mothers even drowned their babies from sheer desperation," las Casas wrote.

Las Casas recalled thousands of indigenous children starving to death, after colonialists worked their fathers and mothers to death in mines and elsewhere. "In a short time this land which was so great, so powerful and fertile . . . was depopulated," he wrote. "My eyes have seen these acts so foreign to human nature, and now I tremble as I write."

Given this ghastly yet little-discussed history, Native Americans have for years pressured the U.S. to change Columbus Day, a federal holiday, to Indigenous Peoples' Day. Dozens of states and cities have voted to rededicate the holiday.

The United Nations declared International Day of the World’s Indigenous People in 1994. It is observed on Aug. 9 every year. Noting "the historical abuses, discrimination and marginalization suffered by indigenous peoples," the U.N. highlighted "their continued struggle for equality and respect for their rights as peoples and as individuals.