"Because ISIS": Whoever wins the presidential election, the Middle East loses

For all the bluster about ISIS, both Clinton's and Trump's plans would make the situation in the Middle East worse 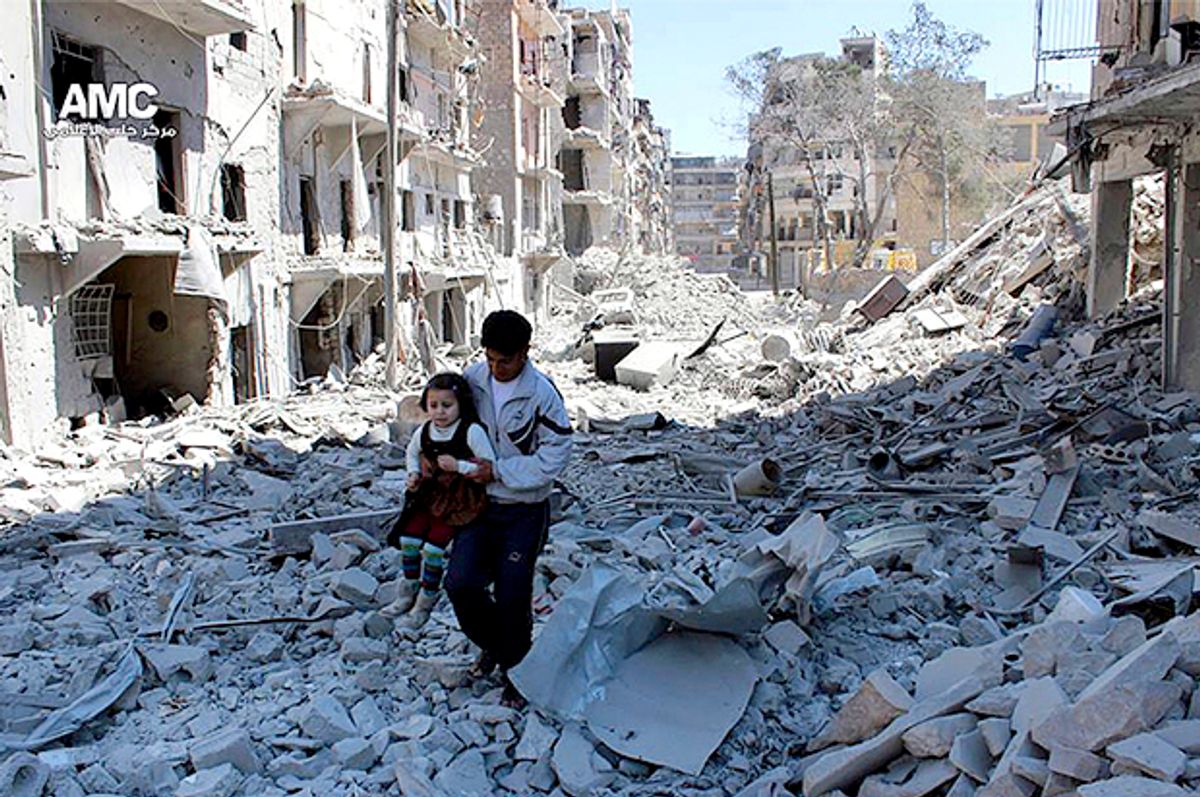 Syrian man holding a girl as he stands on the rubble of houses that were destroyed by Syrian government forces air strikes in Aleppo, Syria (AP)
--

Worries about the threat of ISIS have literally dominated this presidential election. In the debate Sunday evening Donald Trump even used fears about ISIS to explain his scandalous hot-mic comments. Responding to a question about his lewd and abusive language Trump replied,"Yes, I'm very embarrassed by it. I hate it. But it's locker room talk, and it's one of those things. I will knock the hell out of ISIS. We're going to defeat ISIS. ISIS happened a number of years ago in a vacuum that was left because of bad judgment. And I will tell you, I will take care of ISIS." Throughout the debate, as through this campaign, invoking ISIS was used both to deflect attention from pressing domestic issues and to whip up anxiety over our safety, our future, and our very way of life. “Because ISIS” has become a dominant mantra this campaign — a phrase that is simultaneously meaningless and chilling.

After the histrionics of Sunday night it’s easy to fall back into a pattern of watching the candidates’ remarks about ISIS and the Middle East as simply more of the circus performance we have become used to this election.  But there is more at stake here. Trump and Hillary Clinton may have very different approaches to the question of foreign policy in the Middle East — but the question we should all be asking is whether either of them have any chance of making the situation there better.

It’s worth noting that there has been one point that almost all candidates have agreed on this election: Our greatest security threat is in the Middle East. Only Bernie Sanders was bold enough to suggest otherwise, calling climate change our greatest security threat. For Donald Trump “Containing the spread of radical Islam must be a major foreign policy goal of the United States.” For Hillary Clinton “The threat we face from terrorism is real, urgent, and knows no boundaries. … It is not enough to contain ISIS and the threat of radical jihadism—we have to defeat it.”

Both Clinton and Trump agree on the source of our security risks — where they disagree, they have been telling us, is that each of them has a measurably better plan for solving the range of crises in the Middle East. Well, unfortunately for all of us, they are both wrong: A new study shows that each candidate's proposed plan would only make the situation worse.

A research paper by Flynt Leverett for the Royal Institute of International Affairs (Chatham House), an international think tank, now confirms that regardless of who wins the presidential election “Middle East policy is likely to become more interventionist and confrontational than it has been in Obama’s second term."

Leverett explains that the next president will face a range of crises in the region that will require immediate attention: “The next president will have to craft a strategy that addresses a daunting array of challenges at a time of consequential change in the Middle East. These challenges include Iran’s continued rise, Russia’s expanding role, Turkey’s potential realignment away from the West, the growing attraction of jihadi ideas and activism across the Sunni world, and mounting concern about Saudi Arabia’s long-term stability.”

Clinton, Leverett explains, has already shown that her goal is to seek U.S. primacy in the region. Based on her previous experience as Secretary of State, the views Clinton has expressed during the campaign, and her administration’s probable composition, Leverett claims that if she is elected president, “her policies will be more militarily interventionist, more accommodating of traditional US allies and tougher on Iran than Obama’s current posture.”

This means that her administration would lead us into expanded military action “airstrikes, special forces operations and possibly the deployment of regular combat units — against ISIS in Iraq and Syria.” Clinton, of course, makes no effort to hide these hawkish tendencies.

She has also made it clear that her foreign policy is driven by the goal of U.S. influence across the globe: “if America doesn’t lead, we leave a vacuum  —  and that will either cause chaos, or other countries will rush in to fill the void. Then they’ll be the ones making the decisions about your lives and jobs and safety  —  and trust me, the choices they make will not be to our benefit.”

Leverett explains that that is the “primacist” agenda — the foreign policy plan that requires that the U.S. be at the center, prepared to use military force and sanctions to advance its interests: “For Clinton, toughness towards Syria and Iran would restore momentum to the United States’ primacist agenda of bringing as much of the Middle East as possible under a highly militarized, US-led security order while ostracizing and undermining those unwilling to subordinate their strategic independence so fundamentally.” There is little doubt that that plan means more deployments, greater conflict throughout the region, and a more interventionist role for our government.

Leverett explains that Trump appears to offer an alternative; the problem, though, is that Trump’s positions are not entirely coherent. “His rhetoric on Middle East strategy is inconsistent. For example, he can, in the same speech, denounce regime change and nation-building while insisting that the United States should ‘take the oil’ after intervening in countries such as Iraq and Libya.”

Trump wavers between talking about the need to increase the defense budget and arguing that we should spend less on fighting the conflicts of others. But Leverett points out another deep inconsistency, his advisers are mainly hawkish neo-conservatives but Trump himself also argues for a “realist” approach that would not necessarily entail that the U.S. play a primary role in every conflict in the region.

Leverett also adds the worry over Trump’s temperament, suggesting that we have evidence that he could get grouchy and send us into war: His “tendency to react impulsively in certain situations could similarly steer his Middle East strategy towards military intervention.” Discussing a potential Trump administration’s response to the crisis in Syria, Leverett suggests that Trump would likely prioritize fighting ISIS over removing Assad. In his discussions of how to combat ISIS Trump has suggested that he would cooperate with Russia. “But if Trump ever thought he had been double-crossed by President Vladimir Putin, the likelihood of intensified US military action in Syria could rise.” And that could also lead to direct conflict with Russia.

Beyond Trump’s mood swings, Leverett reminds us that the entire world has watched while Trump has gone on his anti-Islamic immigration rants. Recall the moment when Trump called for a "total and complete shutdown" of Muslims entering the United States until "our country's representatives can figure out what is going on."

While the campaign has recently attempted to dial back the Islamophobia of these statements, it’s clear that the damage has been done. Nihad Awad, executive director of the Council on American-Islamic Relations, said  “the original absolutist language of a ‘total and complete shutdown of Muslims entering the United States’ — along with other bigoted statements — reflect a systematic and toxic use of Islamophobia that has had a tremendously harmful impact on the lives of ordinary American Muslims and on the unity of our nation.”

Leverett points out that the impact of Trump’s statements are not only felt within the United States: “Trump’s body of statements and proposals widely perceived as anti-Muslim could drive public opinion in Middle Eastern societies in ways that would make it hard for the region’s governments to be seen as cooperating with a Trump administration.” This means that chances for building alliances and seeking peace could be thwarted by regimes that don’t want to be seen to be collaborating with anti-Islamic Trump.

Of course, Trump also seems to have difficulty with the facts. He claimed that Obama and Clinton founded ISIS. Offered the chance to suggest that it was their policies that had led ISIS to grow, he doubled down. Then there is his sloppy memory of his stance on the Iraq War. If he can’t get the facts straight or remember his own position, there is little chance that he will advance a positive agenda in the region.

As we look to the future, it’s worth looking to the past. Vijay Prashad reminds us that October 7 marks the 15-year anniversary of the start of the U.S. war in Afghanistan. He points out that the United States basically failed to achieve any of its goals. The Taliban remains a force, Al-Qaeda continues intact, and the conditions for democracy are dire.

Like Afghanistan, so too Iraq.  In an earlier piece Prashad reiterated the obvious: “Both Iraq and Afghanistan have been thrown into a downward social spiral, with little hope of an easy recovery.” In that piece he explained that the ongoing crisis had been driven by failures in diplomacy and U.S. foreign policy.

Those failures stem from our refusal to seek meaningful political alliances necessary to make a positive difference in the region. And they stem from our tendency to impose our agenda rather than listen to the needs of the people we purport to protect.