Crossing the line: Yes, border officials and the FBI can — and do — rely on racial profiling 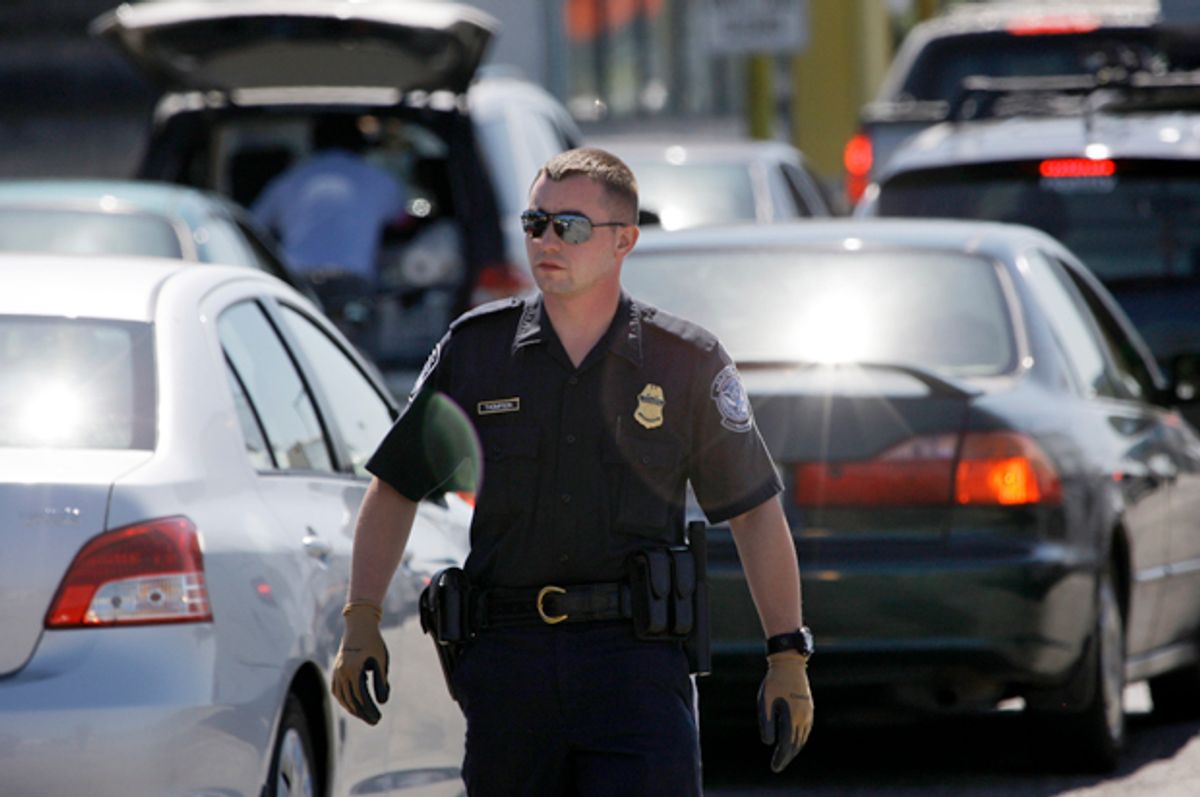 Amid nationwide protests against police killing black people, these days law enforcement officials are eager to insist that they do not condone racial bias. But while the Obama administration has taken the lead in cracking down on local abuses, it allows FBI agents and border officials broad leeway to profile based on race, religion and national origin when it comes to recruiting informants and policing arrivals.

The rules are complicated, but a closer look reveals a number of startling loopholes.

In 2014, the Department of Justice announced a ban on federal law enforcement profiling based on race, religion and other factors. But it exempted “interdiction activities in the vicinity of the border, or to protective, inspection, or screening activities.” That includes the Transportation Security Administration and Customs and Border Protection, which runs screening at airports and land ports of entry and patrols the border.

What’s more, the guidelines still allow the FBI and other agencies to target people based on factors like race, religion and national origin under many circumstances — including for recruitment as informants. Targeting, say, Muslims as potential informants might seem benign. In reality, it can allow for invasive questioning and disruptive infiltration.

Muslims frequently complain of harassment by Customs and Border Protection officers at airports who interrogate them about the particularities of their religious beliefs, and Hispanics complain of invasive searches and interrogations in the vast border region with Mexico. Last week The Intercept reported that “CBP assists the FBI in its efforts to target travelers entering the country as potential informants, feeding the bureau passenger lists and pulling people aside for lengthy interrogations in order to gather intelligence from them on the FBI’s behalf.”

The investigation, based on government documents obtained by The Intercept, strongly suggests that officials are profiling airline passengers based on religion and national origin. People frequently complain that CBP questions them about religion, according to Hugh Handeyside, an attorney for the American Civil Liberties Union's National Security Project.

“Those people we hear from are uniformly Muslim,” he told Salon.

The border carveout, according to The Washington Post, resulted from lobbying by the Department of Homeland Security, which oversees CBP. According to Handeyside, the homeland security agency is now developing its own in-house guidelines that would govern CBP officials. But it’s unclear if and when they will be released.

In an email, CBP spokesman Dan Hetlage said, “No announcements have been made at this time” and did not answer other questions, including ones to simply confirm that new guidelines are indeed being drafted. The FBI did not respond to a request for comment on its use of religion and race in recruiting sources by press time.

While the guidelines state that biased policing is counterproductive and “ineffective,” the carveout for what the government deems to be its most important cases “is a wink to law enforcement” that the opposite is true, said Michael German, a former FBI agent who specialized in domestic terrorism and covert operations.

The 2014 guidelines replaced those issued in 2003. According to German, now a fellow with the Brennan Center for Justice’s liberty and national security program, its “loopholes basically swallowed the rule they were so broad.”

“Unfortunately, rather than make a clear ban on racial profiling without loopholes, the 2014 guidance — while it expanded the types of groups that could no longer be profiled in a positive way — it actually retained the loopholes albeit with much more complex language which in my experience," German said. "Having a rule that takes pages and pages and paragraphs to explain what it prohibits and what it allows is only going to create more error and abuse.”

Last year I reported on CBP abuses at the border and the agency initially insisted that "as a matter of DHS and CBP policy, [it] does not racially profile." Pressed as to why they received a carveout, an official suggested that I ask the Department of Justice. Speaking on the condition of anonymity, one CBP official finally told me that race and nationality could be factors, just not the sole factor, in its enforcement work.

As for the targeting of Muslims for recruitment as informants detailed by The Intercept, that appears to be authorized by not only the 2014 provision exempting border enforcement from the profiling ban but also by another stating that “law enforcement officers may use a listed characteristic in connection with source recruitment.”

The documents obtained by The Intercept, Handeyside wrote in an email, “reinforce our concerns that the DOJ Guidance permits the FBI to target minority communities for recruitment and use of informants. This practice is constitutionally suspect and stigmatizes entire communities instead of focusing on individualized evidence of criminal activity.”

In one blockbuster case, an informant named Craig Monteilh, a convert to Islam, has said he was paid by the FBI to infiltrate and surveil mosques in the Los Angeles area and target Muslims for recruitment as informants. According to a lawsuit filed against the FBI, two agents repeatedly discussed with Monteilh “obtaining new informants within the Muslim community, primarily by getting information on potential informants that could be used against them if they refused to inform — such as immigration issues, sexual activity, business problems, or crimes like drug use.”

The agents allegedly instructed Monteilh “to pay attention to people's problems, to talk about and record them, including marital problems, business problems, and petty criminal issues,” and “on several occasions talked about different individuals that they believed might be susceptible to rumors about their sexual orientation, so that they could be persuaded to become informants through the threat of such rumors being started,” according to the lawsuit.

The case, said ACLU of Southern California attorney Peter Bibring, shows that the abuses in the recruitment of informants can be just as damaging as abusive criminal investigations. This is precisely because law enforcement is “looking for ‘good guys’ not ‘bad guys,’” as the Intercept reported. To convince a “good guy” to inform, promises and threats might come in handy.

“The problem with trying to pressure people into becoming informants is that law enforcement looks for information they can use as leverage even if they have no reason to believe that somebody’s involved in criminal activity,” said Bibring. “And so the process of seeking informants ends up treating ordinary law-abiding people as criminal suspects.”

In recent years, the FBI has been repeatedly accused of using placement on the no-fly list to pressure people to inform. Similarly, agents appear to suggest to immigrants that they can “help with their legal status in exchange for information,” The Intercept reported. It’s perhaps not surprising that FBI agents might believe that such a fishing expedition would pay off, given that that agency training materials have in the past presented average Muslims as likely to sympathize with terrorism and other such stereotypes.

The Monteilh case points to other possible loopholes in the 2014 profiling guidelines.

One section authorizes profiling in “activities other than routine or spontaneous law enforcement activities,” which would include investigations. It states that in these circumstances, “Federal law enforcement officers may consider race, ethnicity, gender, national origin, religion, sexual orientation, or gender identity only to the extent that there is trustworthy information, relevant to the locality or time frame, that links persons possessing a particular listed characteristic to an identified criminal incident, scheme, or organization, a threat to national or homeland security, a violation of Federal immigration law, or an authorized intelligence activity.”

If the FBI believes that “Southern California” qualifies as a locality and Islamist terrorism broadly defined counts as “a threat to national or homeland security,” then perhaps these guidelines, which ostensibly bar religious profiling, in practice actually permit the blanket surveillance of mosques across the country’s second largest metropolitan area.

“Some of the language is so broad,” said German. “A threat to national and homeland security,” he said, “could be interpreted in any sort of way.” And the authorization of profiling if it is linked to “an authorized intelligence activity,” he said, is “simply circular.” If the mass surveillance of Southern California mosques is an authorized intelligence activity, then the profiling conducted during the operation would then be as well.

The lawsuit, filed by the ACLU of Southern California and the state's chapter of the Council on American-Islamic Relations on behalf of Muslims plaintiffs, is now before a federal appeals court after it was thrown out by a lower court judge in response to a government claim that it would jeopardize state secrets.

The operation allegedly ended only when local Muslims reported to community leaders that Monteilh had claimed he had a religious duty to commit violence and that he had access to weapons. One leader, in turn, informed the FBI and instructed the others to contact the local police. Monteilh, after all, looked suspicious.