With nothing to lose, Donald Trump is working to undermine the democratic process 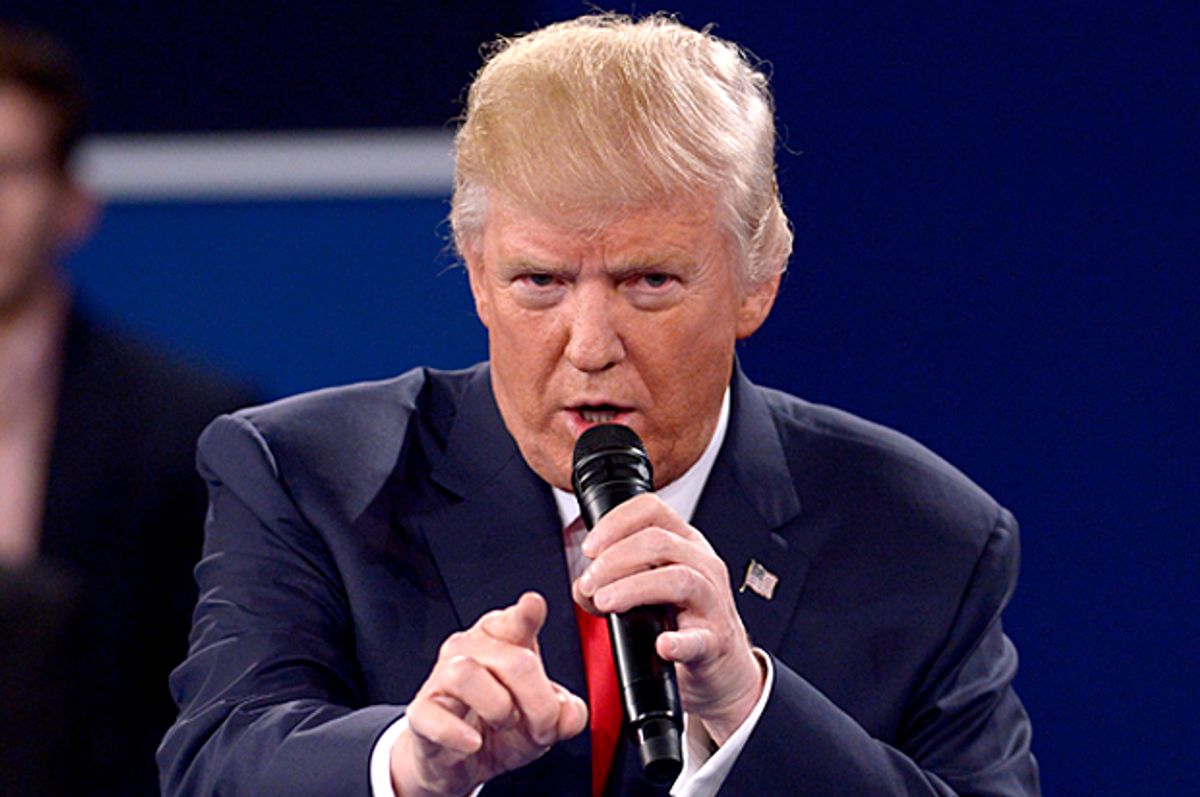 This morning, Donald Trump logged into Twitter and celebrated his newfound independence. “It’s so nice the shackles have been taken off me,” he tweeted, “and I can now fight for America the way I want to.”

It’s a bit terrifying to contemplate the idea that the Republican presidential nominee has, up to this point, been restraining himself in some way, and that there are still darker facets to his personality that he’s been consciously hiding.

What’s really going on here is that Trump is trying to avoid coping with the fact that his campaign is failing. Behavior like this is actually pretty standard for a losing campaign: It succumbs to the urge to pursue higher-risk strategies as a way of breaking out of the tailspin, and it tries to mask the desperation and rally support from the base by adopting a defiantly optimistic posture. Trump is flailing, but in his mind he’s losing his “shackles.”

The dangerous part of all this is that Trump’s idea of “unshackling” means undermining the legitimacy of the election that he is poised to lose. At rallies in Pennsylvania this week, Trump has made the most pointed case yet that the only way he can lose the presidency is if it is stolen from him through voter fraud.

What he’s talking about, but what he won’t actually say, is that Philadelphia’s largely black electorate will commit voter fraud. He’s been dog-whistling this message for months, telling his almost entirely white base to deputize themselves as poll watchers and go to “certain areas” and “other communities” in Pennsylvania to keep an eye out for fraud.

It’s a poisonous mix of racial and anti-democratic themes, with a heaping mound of dishonesty thrown in for good measure. Despite some determined scare campaigns by Republicans and conservatives, voter fraud just isn't a problem in Pennsylvania. When state Republicans tried and failed to pass a restrictive voter ID law ahead of the 2012 election, they admitted in court filings that they had no evidence of any instances or investigations of voter fraud in the state.

Much of the current Philadelphia "voter fraud" howling centers on the fact that several Philly electoral divisions recorded zero votes for Republican presidential candidate Mitt Romney in 2012. Diehard believers in vote rigging consider this proof of tampering, but the Philadelphia Republican Party said it wasn't at all surprised by those numbers.

Trump is aggressively pushing the idea of a rigged system that will deny him an electoral victory that is rightfully his. All the reputable public polling shows Trump losing badly, so he’s feeding his supporters numbers from unscientific trash polls and telling them that they’re the only “honest” surveys. Trump voters are being coached to believe that any outcome other than a Trump victory is illegitimate.

That’s dangerous because elections gain their legitimacy, in part, from the consent of the loser. There’s an implicit agreement between the competing parties in a democratic system that, when the votes are tallied, the loser accepts the outcome and the winner acknowledges that his or her victory does not translate to unchecked authority. Peaceful transfers of power are built on that basic compromise.

The losing politician has a particularly important role to play in maintaining this compromise: He or she not only concedes the loss but serves as an example to passionate supporters who may be distraught at the unfavorable electoral outcome. Trump, as we’re seeing more and more with each passing day, has no understanding of or fealty to the political system. His only concern is winning, and if he can’t win, he’ll do everything in his power to undermine the person who beats him.

So when Trump says he’s lost his “shackles,” it should worry us. Politicians should have some “shackles” to keep them from actively trying to corrode the health of the political system in the way that Trump seems to be doing right now.