"Mulan" is not a romance: Even with an all-Asian cast, Disney's live-action remake could still miss the mark

Mulan won't have a white boyfriend, Disney now insists. But why should she have a love interest at all? 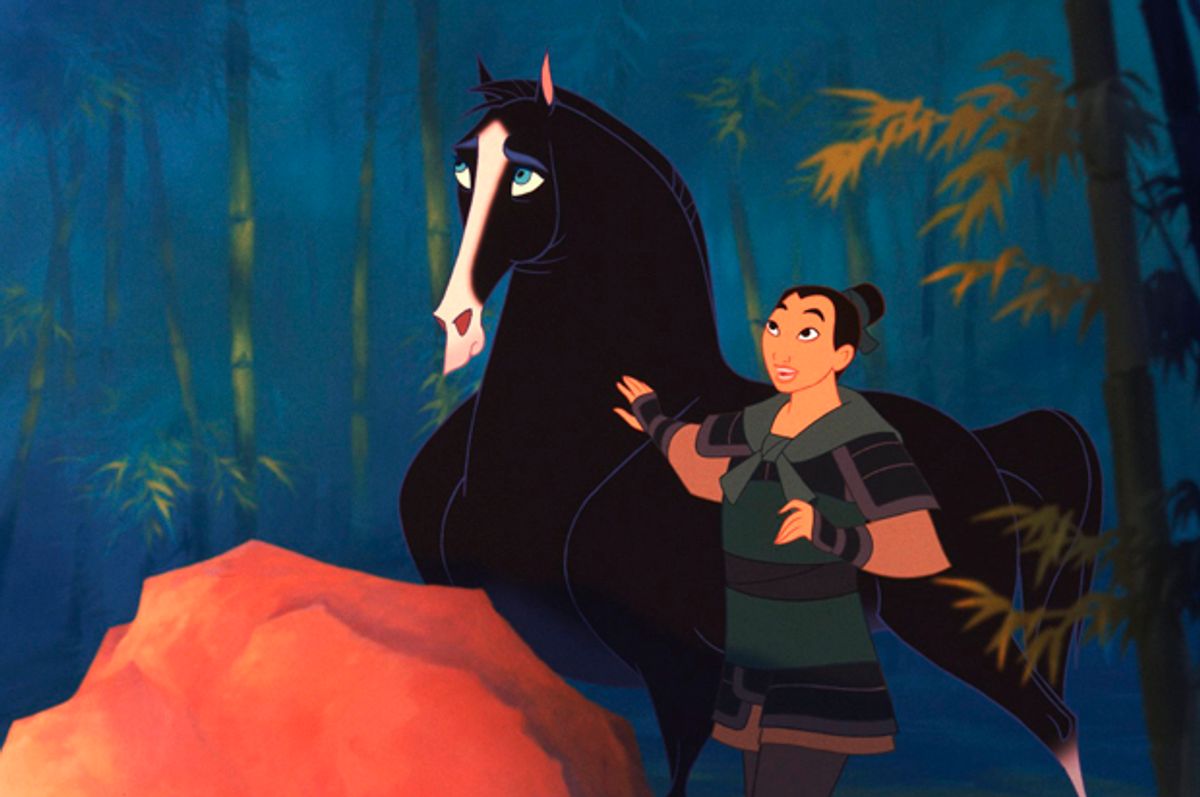 On the heels of NBC’s “Mail-Order Family” fiasco, followed by a startlingly racist segment of “Watters’ World,” came word that the live-action version of "Mulan" had some serious issues. No, Jennifer Lawrence wasn’t cast as Mulan. Actually, it was worse.

Turns out that this version of “Mulan” no longer told the beloved tale of a Chinese woman who fought to save her family’s honor and her country. It had become the story of a 30-year-old European merchant who saved China because 17-year-old Mulan was his boo. A furious open letter posted on Angry Asian Man laid bare the script’s problems:

That’s right. Our white savior has come to the aid of Ancient China due to a classic case of Yellow Fever. In this script written by Lauren Hynek and Elizabeth Martin, more than half of its pages are dedicated to this merchant who develops a mutual attraction with Mulan and fights to protect her in the ensuing battles. To top it all off, this man gets the honor of defeating the primary enemy of China, not Mulan. Way to steal a girl’s thunder.

“You’d think a culturally significant story like 'Mulan' would be immune from Hollywood’s white savior complex,” said the Angry Asian Man himself, Phil Yu, in an email. “But it turns out that they can indeed shoehorn [in] a white hero and sideline the title character in the legend of Mulan.”

“If there were Asian Americans involved with this project from the beginning, someone might have pointed out the glaring insensitivity in this choice,” he added.

To Chinese-American writer Cindy Pon, this version “truly feels like a slap in the face.” As author Misa Sugiura commented angrily: That version of the script includes “pedophilia, colonialism, and white savior trope all in one movie.” Almost immediately, the hashtag #MakeMulanRight began trending on Twitter, along with a petition that gained 105,000 signatures with remarkable speed. Seems that fans really did not want a whitewashed Mulan, and they handily rejected a story line that reduced her to Asian sidekick and lady love interest.

Now, as it happens — and perhaps realizing there were problems within the problems — Disney has already changed the scriptwriters, and the script described above is not, per cultural critic Jeff Yang, the script that the company will shoot. The new writers are Rick Jaffa and Amanda Silver, the husband-and-wife team whose original script for “Jurassic World,” featured Chinese lead characters. (It didn’t get made that way, but at least they tried.) Disney is also promising that Mulan will have an Asian love interest.

Here is the thing: Replacing the screenwriters, and even giving "Mulan" an all-Asian cast, doesn’t necessarily eradicate the underlying conceptual and institutional problems exposed by these efforts to produce a live-action version of the beloved animated feature. Racist mangling of the story aside, the script may still blithely normalize a relationship between a young girl and an inappropriate older man — a man who, as written by the original scriptwriters, is not a good human being but the kind of suitor Asian parents would mightily disapprove of and any girl who’d fall for him would not come off as a sexy rebel but would make her exasperated friends tweet at her (using homing pigeons, of course): WTF is wrong with you, girl?

“The idea that anyone would think this version was a good idea for a movie aimed at Asian Americans OR the China market is eye-popping,” Yang posted on Facebook. In an email to me, he elaborated: “It’s staggering that Hollywood — even as it keeps its eyes on the prize of the world’s emerging cinematic markets, led first and foremost by China – can’t shrug off its legacy of white privilege.”

As the project moves forward, having Asian Americans on the team would also probably help keep the new scriptwriting duo from totally mucking things up. Purchased on spec, the original live-action screenplay totally missed the story’s vital, beating heart. If the new script builds on that mess, then the rewrite is doomed to compound the foundational errors.

In a nutshell: “Romance in the animated film was secondary — practically tertiary,” said writer and artist S. Jae-Jones.

So even an Asian love interest would basically be this tale’s tinsel, not tree. “The legend of Hua Mulan didn’t even have a smidgeon of romance in it,” commented Celeste Lim, author of "The Crystal Ribbon."

Mulan went to war and came back a hero, period. It was a tale of strength and courage that gave heart to many people probably during the subsequent chaotic dynasty of the 10  warring kingdoms. It’s a war, who has time to fall in love?

Here is Kat Cho’s tweet on the same topic:

One more thing. For me, as an Asian child, MULAN was about familial love/filial piety NOT war/romance. Just Food for thought #MakeMulanRight

Notice a pattern in these critiques? For Asian and Asian-American women, "Mulan" is a story about family, tradition and the heroine’s journey. Love? What love interest? Romancing Mr. Right is not the emotional heart of this story: Mulan’s strength, courage and sacrifice is. She conquered every odd in order to find those rare qualities inside herself. It's not about her relationship to some random guy whose very presence serves to impose those gender norms that the woman herself defied.

Imagine if Disney tried to sex up the story of Joan of Arc. Horrified? Welcome to empathy land. If the new screenwriters can’t manage to keep the narrative centered on Mulan, then “they should not be writing this story,” said author Ki-Wing Merlin.