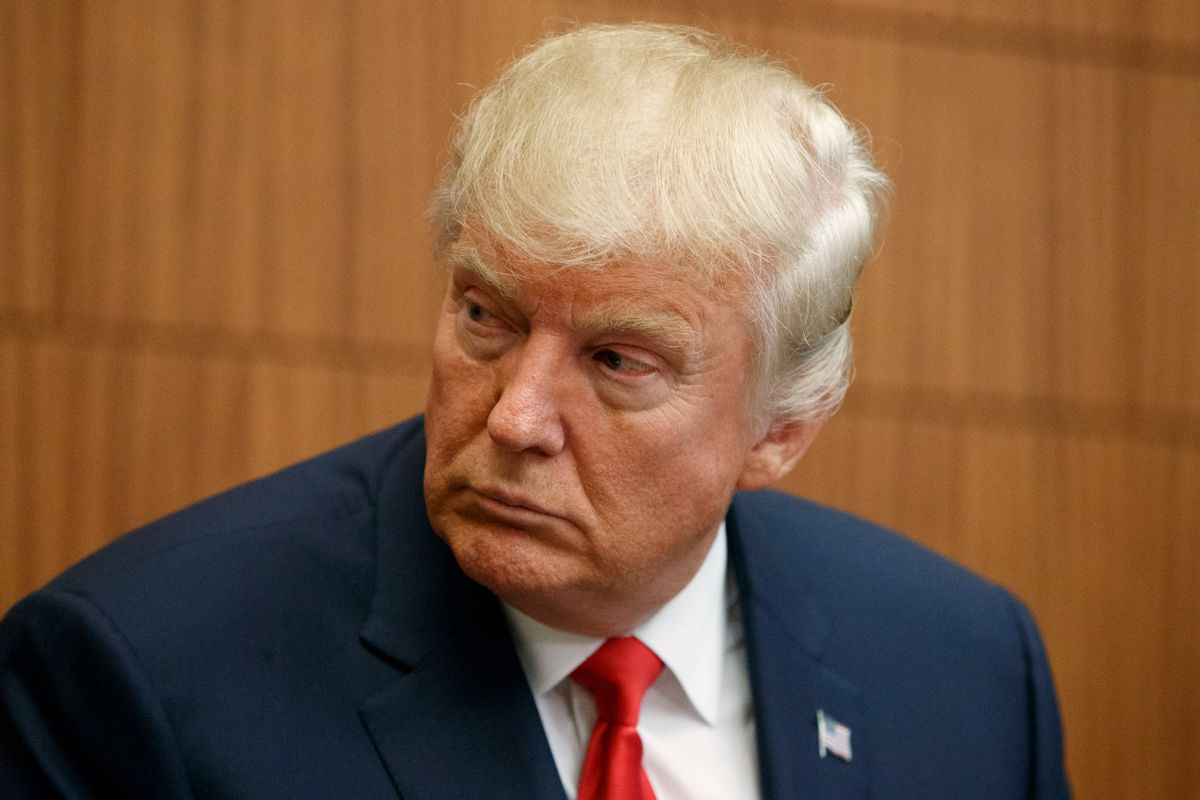 There are all sorts of lessons to be drawn from Donald Trump’s “Access Hollywood” video. This is the one I draw because I think it speaks most forcefully to the Trump media barrage: A candidacy launched by television has now most likely come undone thanks to television, particularly one aspect of television — its macho culture.

Television has been Donald Trump’s enabler from the time he announced his campaign for the presidency. He was always the attention-deficit candidate in an attention-deficit age where television, especially cable television, required a 24/7 stream of news. Trump understood, and provided it. He was a clown in a never-ending circus. Years from now, historians will no doubt analyze the Trump phenomenon and point to white grievances at the ascendance of minorities, to globalization, to wage stagnation and economic inequality, to political dysfunction, to anger at elites and to a host of other forces as sources. But they might also want to look at an America that can’t spend a second away from its cellphones, that needs constant stimulation, that has to tweet and text lest it lose contact, and that must check Facebook 100 times a day to keep in the loop. Trump became the political loop.

Given all that, not least of which is the power of television, the shock isn’t that we now have a Donald Trump as a major party candidate. The shock is why it took so long for a Trump to arise. Television has always hollowed out content and degraded discourse. That is its proclivity, and there are very few who have been able to buck it. From its inception, it has primarily been an entertainment medium, not an informational or educational one, and it has imposed its imperatives on our politics. In this campaign, we have gotten more political coverage than I can ever remember and less coverage of issues. In fact, aside from PBS’s “NewsHour,” I can’t think of a single feature on any network news broadcast that has dealt with policy. Back in the day, news broadcasts felt obligated to do those sorts of stories, albeit short ones, that compared one candidate’s positions to the other’s. Those days are long gone. Now we get Hillary’s emails and Trump’s videos. We get entertainment and distraction.

As the attention-deficit candidate for our times, Trump should win this election, since his opponent is obtuse enough to think that issues still matter. That is why, despite what pundits say, I think his failing isn’t that he didn’t pivot to the center or, at least, to a modicum of normal, if not civil, behavior, but that he has gotten trapped by television into not being able to pivot to politics at all. His candidacy arose as a freak show, and Trump must have sensed that if he pulled the plug on that show, he would lose the media attention that fueled him. Television wants what it wants. Trump has had to give it to them or risk being just another political rhetorician. That is the symbiosis.

But there is another sense in which Trump was enabled by television and then found himself trapped by it. And that brings us to the “Access Hollywood” tape. Television — all entertainment, if you want to be frank about it — is a boys’ club. Men dominate, and I think one reason they may dominate is that television, including TV news, is all about appearances, and judging women’s appearances, which is a big part of television, has long been the province of men. The crude locker-room banter about women that Trump excused is exactly the sort of thing men in high places in entertainment have always engaged in. (As a Hollywood historian, I know whereof I speak.) Not for nothing is Trump surrounded by Roger Ailes, who was accused of sexual predation; Rudy Giuliani, who excused infidelity by saying everyone does it; and Steve Bannon, whose ex-wife accused him of abuse. This is Trump’s personal boys’ club, and it is united by hostility to women.

You can add to that group Matt Lauer and Billy Bush. Lauer’s much-derided “commander-in-chief” broadcast was notable largely for how prosecutorily he treated Hillary Clinton, basically like a frightened man who wanted to prove his masculinity to her by verbally battering her, and how easy he went on Trump, basically like a locker-room pal. It is salient that Lauer was rumored to have pushed Ann Curry, another strong woman, off the “Today Show,” and that he was rumored to have had an affair with the program’s recently departed co-anchor Natalie Morales — a rumor so rampant that Lauer had to deny it publicly. (The affair was said to have been one reason for her leaving.) The long and the short of it is that Lauer, if the gossip is to be believed, may have a women problem himself. With Trump, he was in a comfort zone: two louts.

As for Billy Bush, the tape shows you all you need to know, though anyone who watched him on “Access Hollywood” over the years could have seen that he was extremely flirty with certain female guests, not unlike Trump. (I remember a segment from the Sochi Olympics where he seemed to be coming on to former gold-medal ice-skating champion, Katarina Witt, even as he was interviewing her. It was shocking.) So this wasn’t, as he claims in defense, behavior of a young, immature man — not if 34 can be considered young. It was Bush’s way of doing business, which is often television’s way of doing business. He treated women like cheesecake.

When the “Access Hollywood” tape was revealed last Friday, my wife was flabbergasted — not by Trump’s behavior, which had been exposed long before, but by the easy camaraderie between Trump and Bush, the palsiness of two overgrown teenagers who were trying to one-up each other as they drooled over women while denigrating them. Every man has known guys like this — deeply insecure men who brag about their sexual conquests and their sexual ability. "Why would two men who barely know one another talk so openly about things that should embarrass them?” my wife wanted to know. I explained to her that Trump and Bush were trying to impress each other, as men sometimes do, in the common currency of male braggadocio, which is women. They were showing off for one another.

Oddly and sadly, women were incidental to their palaver. So, frankly, was sex. It was all about power. Trump wasn’t saying that he was great in bed. He was saying that he could do to women whatever he wanted because he was a “star.” And Bush played along — a toady and enabler. He apparently liked the idea that Trump could impose his will on women — or he was flattered that Trump, the big shot, wanted Bush to think so.

Questions have arisen as to why NBC News didn’t race to release this incendiary material from “Access Hollywood,” which is owned by NBC. After all, they had the scoop of a major presidential candidate bragging about sexual assault. One can only speculate. NBC News may have dragged its feet because chief honcho Andrew Lack didn’t want to throw Bush, who has now been suspended from "The Today Show,” under the bus. Or NBC may have dragged its feet because it has had a long and profitable business relationship with Trump on “The Apprentice” and sought to protect him. But I think something else was at work. The network brass may have dragged their feet because this misogynistic, chest-puffing talk and behavior is so natural to the men who run television that they didn’t even recognize sexual predation when they saw it.

If Trump were a tragic hero, which he most certainly is not, this would be a fitting demise. The man whom television couldn’t get enough of, revealed too much of himself. The man who looked on television like a billionaire mogul got exposed as an unself-confident locker-room pipsqueak trying to impress a frat boy numbskull from a TV entertainment/news show. And the man who boasted about his power over women got ensnared by television's macho culture.

It is a great comeuppance.