A geopolitical argument for Hill: Just because America can afford a President Trump doesn't mean it should

For starters, Trump’s plan to force allies to rearm is geopolitical madness 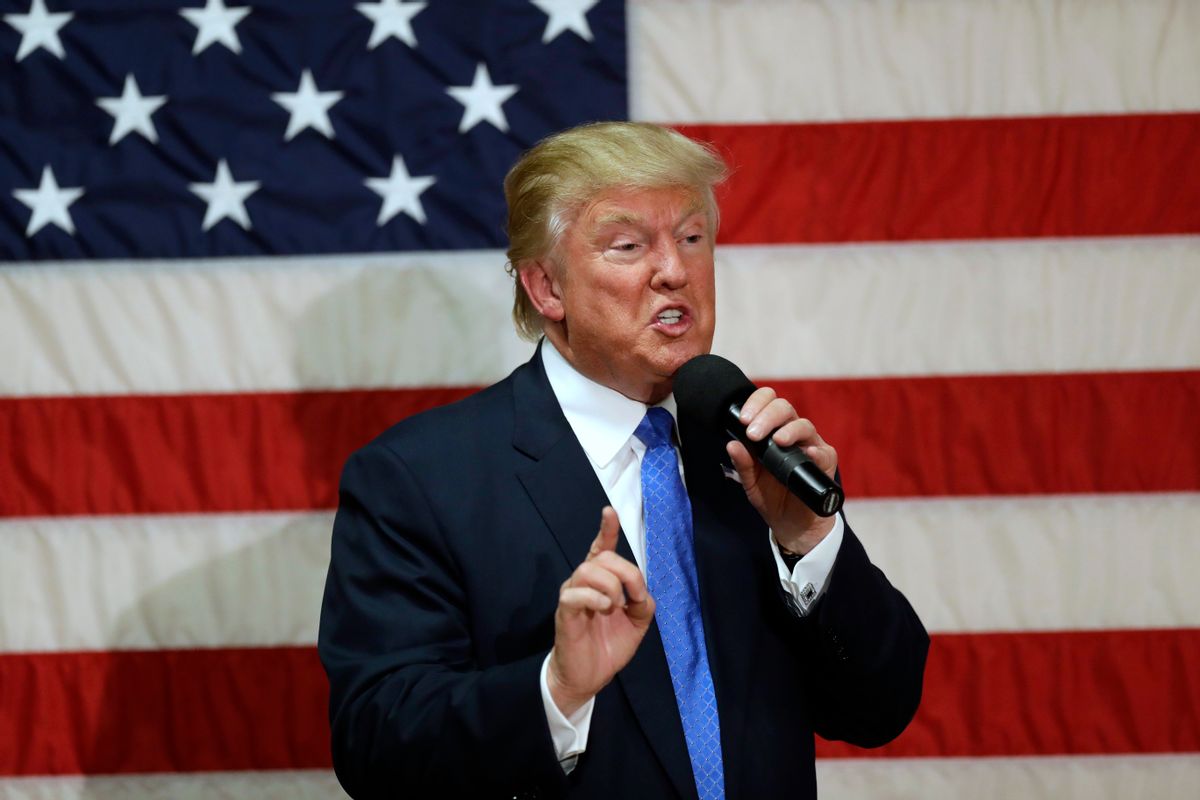 I have argued in the past that the damage Donald Trump could do is limited: Balanced by a vast and enduring American state, every U.S. president — regardless of the strength of their support or the breadth of their mandate — invariably finds their political capital spent. A could-be President Trump would be no different, and a new president could readily course-correct any of his excesses. This is a key reason why the United States continues to be a superpower: Its powerful executive is routinely and peacefully switched out, ensuring that bad ideas are cycled out of the state every four or eight years.

But that is not to say there isn't an increasingly compelling argument against Trump. As his proposals become clearer and his talking points repeat themselves, it becomes necessary to evaluate the Republican blowhard and identify precisely why President Trump is not in America’s interests.

But let’s be forward about what this article is not

There are a huge amount of feelings that swirl about Trump. His penchant for speaking off the cuff, for saying quite literally what’s on his mind at that moment and for breaking the once-inviolate rules of political correctness both enrage and endear millions of Americans. His supporters love it; every outrageous comment reminds them of the freedom of speech they feel has been lost through "safe spaces," Human Resources-imposed censorship and a vanilla mainstream media wildly out of sync with most Americans’ everyday experiences.

But such strict cultural control has been exercised largely to avoid alienating any one group of Americans. Americans are heavy on the use of identity politics: being a woman, white, black, Latino, etc., often dictates how an institution, from a newspaper to a political parties, treats you. As Trump talks from the hip, he has broken these rules and enraged different groups in the process.

None of this much involves the geopolitical effect Trump might have: Presidents may accelerate or slow down cultural change, but they do not cause it. Those upset — or thrilled — by Trump’s wording are missing the point.

Instead, we have two very specific bad ideas that have come from the Trump camp, and their geopolitical impact is worth discussing.

Trump’s obsession with American debt is one of the few places where he and establishment Republicans align. Many Americans worry about the approximately $17 trillion debt the federal government currently has. After all, isn’t debt always bad and savings always good?

The answer to both is, increasingly, sometimes. The limits of paper currency as an economic tool are rapidly being reached as technology outpaces the abilities of our dollars and euros to accurately reflect resource crunches. But Trump’s laser-like focus on overcoming the debt is a grave geopolitical threat to the United States and the world financial system.

Trump’s initial (bad) proposal was to act as though the federal government were just a bankrupt company. This highlights Trump’s terrible leadership mentality: Being a CEO is a vastly different experience than being a president. Nation-states don't care about profit, but power and security.

Nearly $12.5 trillion of the U.S. debt is owned by the United States itself — a half trillion to Social Security and other federal trust funds, a half trillion to individual Americans, states and cities, and the rest to the Federal Reserve, which has used debt as an inflation controller. Offering to pay back the country less than its owed is pure insanity and demonstrates the difference between national and personal debt. The scenario is like if you could borrow money from yourself to pay your bills today and not only would you get away with it, but everyone would encourage it.

Of course, personal debt doesn’t and can’t work that way — but national debt can. National debt is far more artificial than personal debt. When a state not only produces money, but also decides to allow itself to go into debt, the rules get wonky.

The bottom line is that a war on debt would be an irrational siphon of wealth toward debts that don’t actually need to be paid. America’s current debt load has less to do with its fundamental economic situation than with the limits of our currency system. To embark upon austerity, or the nation-state equivalent of corporate bankruptcy, would be like applying football rules to a baseball game.

Like a war on debt, “America First” is a bad, bad idea. Trump has stated that he would force U.S. allies to begin paying for the defense the United States provides. There may be some merit to that — U.S. allies could pay to help base American forces.

But the notion that American allies should do for the United States what it does for them is to reopen a geopolitical Pandora's box that was already closed by World War II.

In order for American allies to be capable of projecting power into the United States, they would have to rearm, and quite heavily. Currently, with U.S. power protecting them, they have no incentive to do so. This is a win-win scenario for many folks. Citizens of U.S. allies don’t have to pay (or die in) vast militaries; elites of U.S. allies needn’t worry about external security; and U.S. citizens and elites needn’t worry about threats from potentially powerful nation-states, or be concerned that some distant spat will drag them into a murderous war.

Imagine forcing old imperial powers to rebuild their fleets and armies of old. It was a bad situation in the 20th century, and it would be just as bad in the 21st.

Consider how many old rivalries U.S. alliances have put to rest. Japan and Korea are now bound under the American aegis; so too are Germany and France, Greece and Turkey, Poland and Germany, Italy and Austria, to name just a few. While Europe was once the world’s most warlike continent, today it is the most peaceful (Ukraine notwithstanding). That is entirely because the United States has secured Europe in a way that Europe itself never could.

More directly, if Trump gets his way, it would mean a rearmament in Japan and Germany, the two WWII foes who would, over the course of the next century, have increased incentive to challenge the United States not just economically, but also militarily. Imagine a militarized European Union under German domination. What would there be to prevent it from becoming a rival bloc to the United States? And while you might argue that Germans have learned the lesson of history, that cannot be taken for granted indefinitely. The generations that saw World War II and the Cold War will die off, and when they do, those who replace them will have dim cultural memories of the war. The only guarantee of a peaceful Europe is one that is minimally armed.

This remains just as true for Asia, though Japan doesn’t sit at the center of an alliance like the European Union. Without the United States, Asian states will feel forced to close ranks against China. This could create a power bloc that might well end up looking much like a militarized European Union, with existing U.S. trade deals held in place but with American and U.S. military power replaced by indigenous power. Japanese, Korean and even Vietnamese fleets could combine to form yet another force that might provoke World War III in a multipolar world.

Planet Earth is considerably safer with the United States as the dominant power precisely because it keeps vast swathes of humanity disarmed. It isn’t so much a matter of it being the United States as it is being dominated by a single power that has already reached the natural limits of expansion — that last part is key because a rising power that hasn’t yet learned when to stop conquering is quite dangerous. The United States is out of the empire-building business; its best leaders are those who tend to its network of alliances and trade deals with an eye for stability.

If someone says they’ll vote Trump because he’ll take on debt and make America’s allies pay for all the free defense, here is your response.

Trump’s plan to cut the federal debt is nonsense: so much of that debt is American-owned, so all he’d be doing is slashing benefits and cutting retirement funds for millions of Americans. Worse, the track record for austerity is not very good, and in America’s case, inessential.

Meanwhile, Trump’s plan to force allies to rearm is geopolitical madness: You never force defeated foes to pick up a gun unless you absolutely have to. The United States is nowhere near having to retreat from superpower status, and to push rearmament on allies like Japan and Germany will create a long-term threat to world order and American primacy. A disarmed Europe and East Asia serve everyone except those want to give into the demagogic impulses of men like Trump.

The bad news: The United States can afford a President Trump.

Being a superpower with well-checked institutions, the United States can afford the mistake of a President Trump. But just because it can doesn’t mean it should. Americans must become more rational on their own, or world events of their own making will force them to.