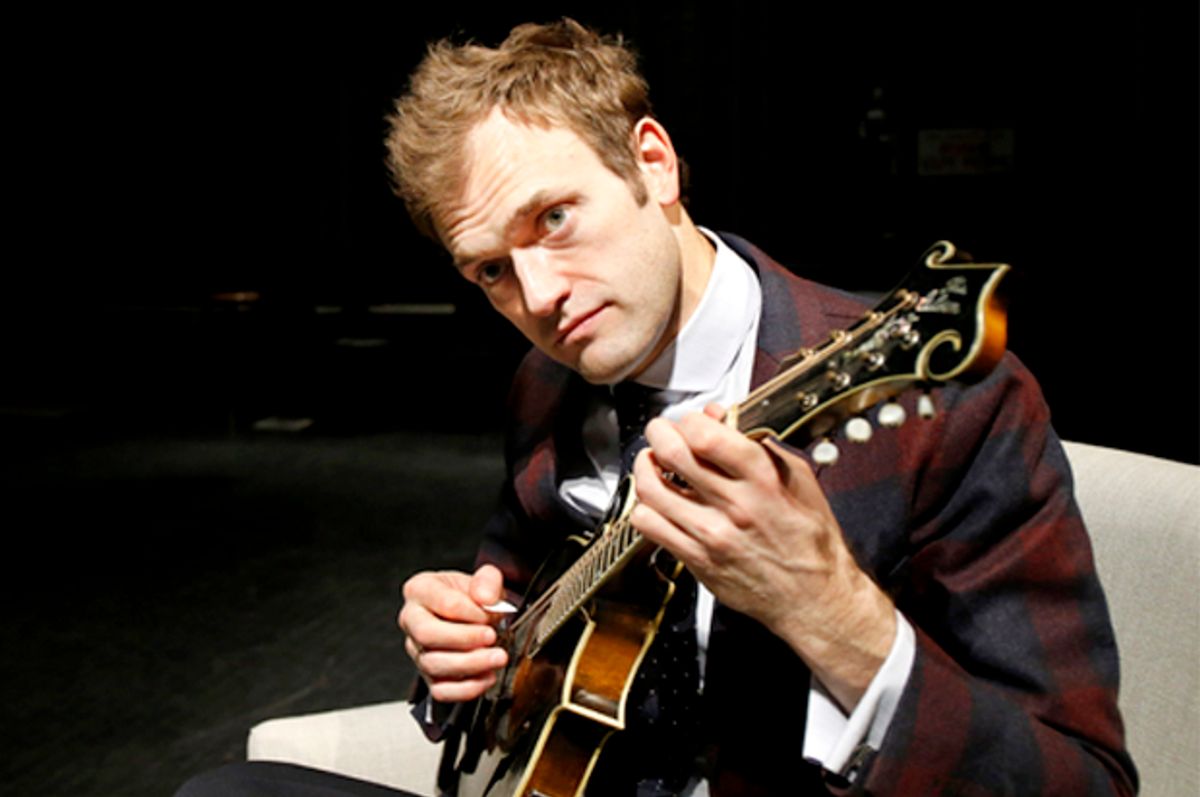 The mandolin virtuoso Chris Thile has been among the most revered players in the acoustic-music movement since his days in Nickel Creek. These days he records in various forms, alongside country and classical musicians, and as leader of the folk chamber group The Punch Brothers. But Thile is about to get his widest exposure yet when he takes over “A Prairie Home Companion,” the beloved and often corny radio variety show Garrison Keillor has hosted since 1974. The show has a huge and very loyal following, but many radio listeners think of it as needing, after four decades, a new vision. On Saturday, it will get one.

“Prairie Home” has been dedicated to various forms of American folk and country. One of the changes Thile will bring is not just a younger sensibility, but a wider range: His first guess will be Jack White, alongside the jazz-trained poly-stylists Lake Street Dive. Since Thile’s tastes range from Bill Monroe to Bach to hip hop, anything seems possible.

Salon spoke to Thile (whose name is pronounced ‘Thee-lee’) from his home in Portland, Oregon; the interview has been lightly editor for clarity.

This new gig is good news for those of us who follow of your music. What everybody’s wondering — whether they are fans of the old show or admirers of the more eclectic sensibility you represent — is how much “Prairie Home Companion” will change. A lot of people love it, but there’s also a sense that it needs a new vision. How do you see it? How far will you push the show?

The main thing is that the format of the show is profound. Garrison has created this format for two hours of live music and spoken word, that propels itself forward — two hours are gone in the blink of an eye. So I see no reason to change the form. I’m salivating to be able to create and curate within the framework.

But, human beings are remarkably adept at detecting artifice or insincerity. The show's existing regionalism — we’ll have to change that. I’m someone of diffuse origins, which is hardly unique in today’s world. So I think that will go hand in hand with the gradual change of people’s lives in America. A lot of people can relate to being of sort of ambiguous place. I could be called a Southern Californian — I was born there — but we moved to Kentucky when I was 14. I’ve been sort of a city boy ever since. So the show will change to reflect the fact that its host is not a 73-year-old Minnesotan but a 35-year-old “other.”

The show is so associated with the northern Midwest, but you’ve lived all over the place and spent a lot of time on the road as a touring musician.

I think the important thing is for people to feel like they’re getting a real story, something real — as opposed to the usual style of late-night television or something like that. This is no knock — I love late-night TV. But I do have this constant sense of being sold something, or things being delivered to me, with the main idea being that I not change the channel and miss the advertising.

We’ve coming at from a completely different spot. Garrison always has, public radio always has… So sincerity is at a premium. It must be sincere.

Another thing that will expand is the sonic palette, to reflect the range and depth of good music today.

I want to hear about your guests, but I’m also wondering about how much you’ll get to play, and how much range you’ll have on mandolin. You’re playing an instrument associated with bluegrass, but you’re very into J.S. Bach, very into Kendrick Lamar and have played both of their music. How wide will your playing range?

Oh, I think it’ll range as widely as that — from Bach to Kendrick Lamar. Obviously we have to be careful that we weave what could be seen as disparate strands into a cohesive whole. But that’s the great game of being master of ceremonies of a variety show: Contrast is not enough. There has to be a sense of purpose or meaning to the things that you’re presenting.

Just as Garrison had his house band, and always made a significant amount of music on a per show basis, I’ll do the same. I don’t know what the actual proportions are, but probably in the 20 minute zone. Much like the guests are in charge of about that much music. And we’ll always defer to the guests.

I’m getting together the music for this first episode. On one hand we have Jack White, on the other we have Lake Street Dive. And also it’s so much fun for me to take into account the spoken-word guests. This week we have Maeve Higgins, who is from Ireland. I’m not going to miss the opportunity to play a little set of Irish music.

I look forward to the traffic direction side of my new gig — this putting on a show is such a noble task, and one that Garrison has accomplished with so much aplomb over the years.

A lot of things have changed over the four decades since the show started. In recent years, comedians have become some of the great social commentators of our time, and there’s a movement of alternative comedy that’s very smart. Do you follow this stuff, and how will you find the best acts for the show?

It was actually one of Garrison’s first pieces of advice to me — he knew I wouldn’t attempt to deliver a Lake Wobegon monologue on the show. So he emphasized the importance of spoken word, of being spoken to during the show. That’s one of the things that propels the show forward. And he said, “You should lean heavily on stand-up comedians, because they’re particularly adept at speaking to people.”

My window into stand-up comedy has been the longstanding music and comedy club Largo. I think what [owner] Mark Flanagan has created there is akin, in a way, to “Prairie Home Companion” — he’s made a place for people who create beautiful things to share them.

Any night you can go to Largo and it’s gonna be great — you can just go. Mark Flanagan is a dear friend of mind, and he was the first person I called when I realized I had to brush up on my stand-up comedy. We’ve been in constant touch about it, and I’ve started doing solo shows as a way of communicating with these comics. The first one I’ve done was with the incredible magician comedian Derek Hughes, and then a surprise set of comedy from Zach Galifianakis.

It’s a tremendous pressure valve: We need a form of relief. And stand-up comedy is giving us that. It’s something I’m looking forward to introducing to the “Prairie Home” world.

I should say, as an addendum, that Garrison’s Lake Wobegon monologue is often a form of standup comedy: He wouldn’t be out of place delivering one of those at the Laugh Factory or whatever.

Bringing in comedians takes some pressure off you. Would you be comfortable doing a big opening monologue?

I’ve guest-hosted four times, and have written my little open each time. I don’t feel the need for it to be screamingly funny. Honestly, I think that the late-night hosts feel pressure to be screamingly funny in that opening monologue. And that’s tricky, since depending on what’s gone on in the day, sometimes that’s not necessarily that right approach — not the right time to crack jokes.

I’m not a comedian, I’m a musician, but I love talking to people, I love telling a story. But my open can just be a salutation, welcoming people to spend a couple of hours with us.

You probably don’t need me to tell you this, but even if you’re respectful to the model of the show, you're much younger than the previous host and people like Jack White will be a new element. Do you think you’ll lose some longtime listeners?

Of course. There are people who’ve been listening to the show exclusively for Garrison. Which he deserves more than anyone — what he’s created, the persona he’s embodied, his ability to make observations in an inclusive, illuminative way… Is ‘illuminative’ a word?

Well, it could be. I’m in favor of it. Maybe you could start coining your own words like Donald Trump does.

[Laughs.] Boy, I’m assuming this mantle at a poignant time in our nation’s history. And — spoiler alert — this week’s song is a little Trumpy.

I think there will be people who, since it’s not Garrison [hosting] anymore, they’ll lose interest. That’s fine. But for people who’ve used the show as a window into what’s happening in the world of audible entertainment… I think for those people, we will continue to be interesting and relevant. And I think we have a good chance of adding people, people who maybe didn’t feel spoken to before.

I hope you will bring Gillian Welch and Dave Rawlings on the show.

Oh — at the earliest opportunity!

I think I know the answer to this, but who's your favorite mandolin player of all time?

Oh, it’s, there’s no way to answer that question. Too many people have brought interesting things to the instrument. I know that’s a boring, diplomatic answer, but I really do look up to all of them.