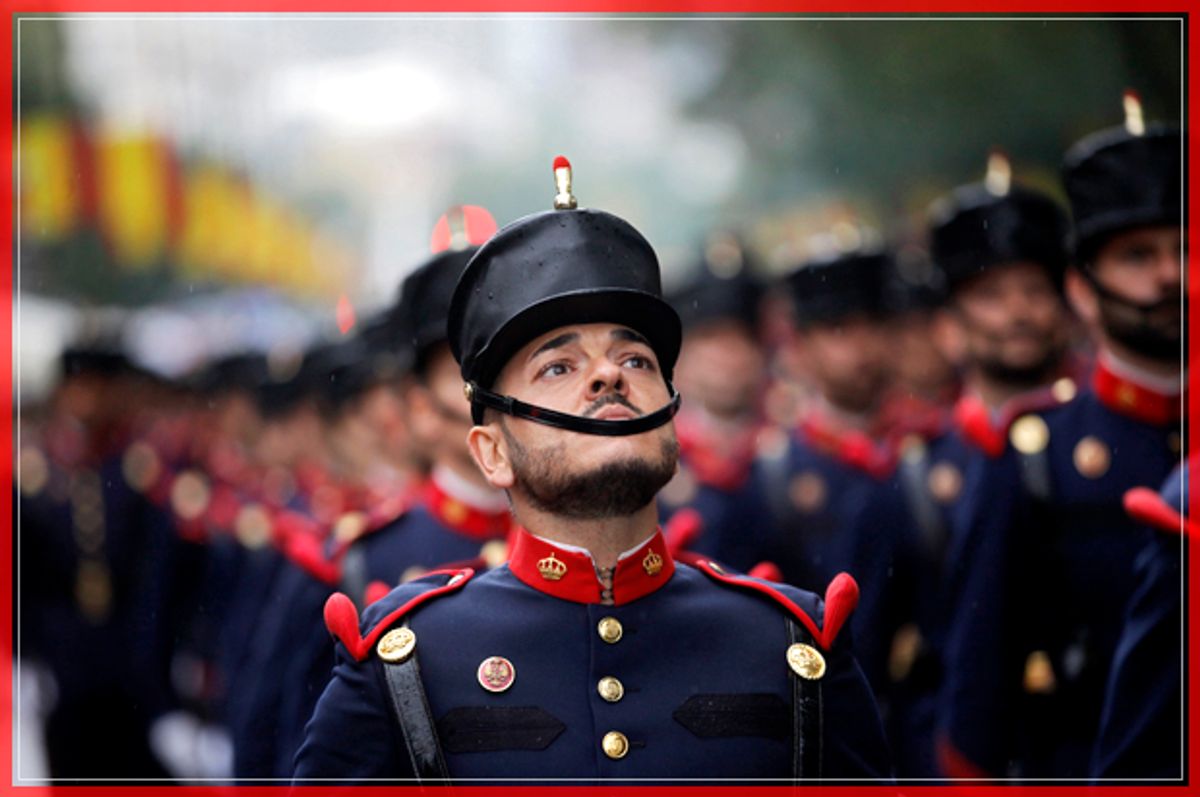 A Spanish soldier looks up as he marches with others in a military parade during a national holiday known as "Dia de la Hispanidad" or Hispanic Day, in Madrid, Spain, Wednesday, Oct. 12, 2016. Almost a year into Spain's political deadlock, the country is celebrating its National Day with a military parade of over 3,000 soldiers marching through Madrid and aircraft drawing trails of red and yellow smoke in the sky to represent the flag. (AP Photo/Francisco Seco) (AP)
-- New frontiers in "Lock her up" mania: So George out in West Des Moines has pursued one of the most deranged right-wing memes of this deranged election year to its logical extreme, by mounting an immense portrait of Hillary Clinton behind bars above his yard. It's an impressive demonstration of the First Amendment in action -- but seriously, given that George's fence bears a startling resemblance to the outer perimeter of a correctional institution, who's really in prison here? Spain doesn’t have a government at the moment, but that didn’t stop the country from celebrating Hispanic Day, or “Dia de la Hispanidad.” For almost a year, Spain has been in political limbo since two elections failed to settle on a governing coalition. The Spanish parliament has until Oct. 31 to choose a new prime minister or the government will be dissolved. On Wednesday, Spanish soldiers paraded through the streets of Madrid, providing a needed break from the political stalemate. As someone who spends a good deal of time on news photo sites, one holiday I do not look forward to every year is the Day of Ashura (Tesagan Gin Je is another – don't google that unless you have a strong constitution). Celebrated by Shi'a Muslims around the world with parades of self-flagellation and other forms of bodily harm that leave the streets literally awash with blood, this ritual seems to attract the bravest, most prolific photographers. Luckily not all of the photos capture the blood-soaked side of this solemn ceremony. At first glance this frame resembles a fabric pattern or an abstract painting. But what you’re actually looking at is an aerial photo of newly harvested chili that’s been spread out to dry in the sun.