The mother of all "October surprises": Whoever released Donald Trump's 2005 video is this election's real star 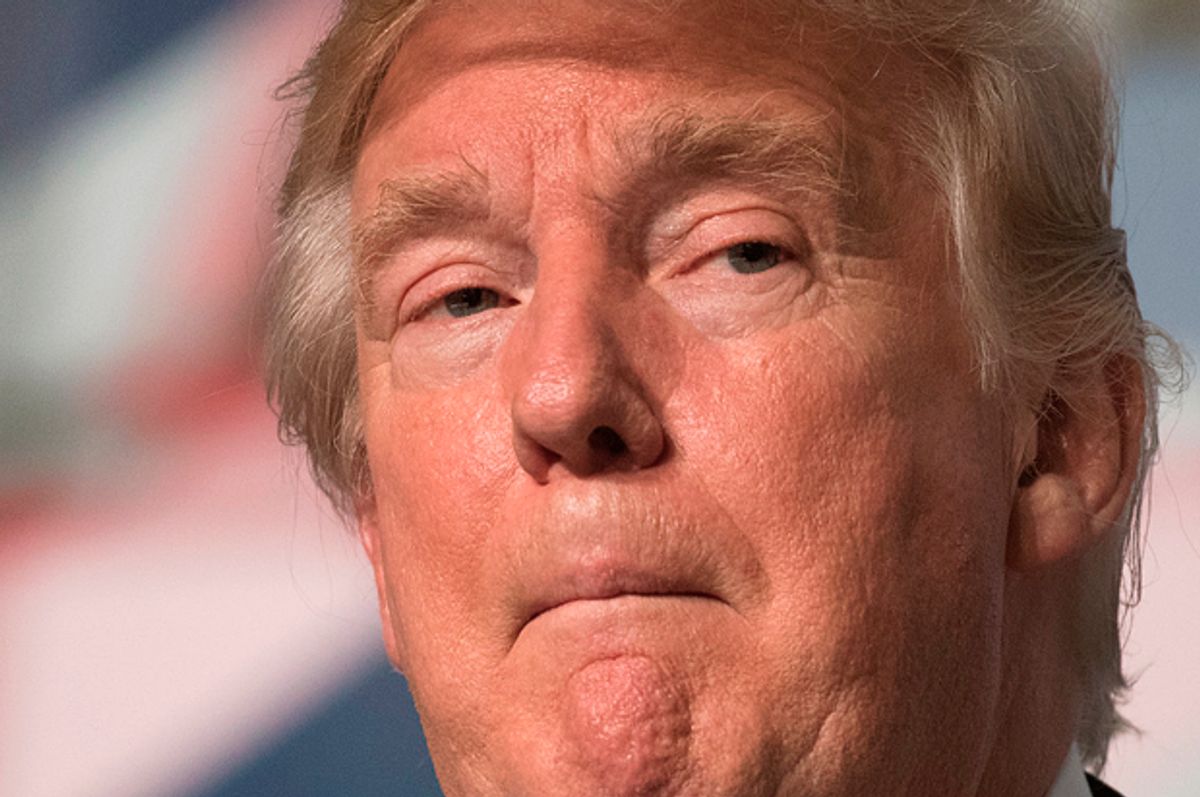 Donald Trump, the Republican candidate for President, speaks at the Values Voter Summit, a conference of Christian religious and social conservatives, at the Omni Shoreham Hotel in Washington, D.C. on Friday, September 9, 2016. (Photo by Jeff Malet) (Jeff Malet Photography)
--

“This is politics at its finest,” Dustin Hoffman’s character says in the film “Wag the Dog.” The political black comedy tells the story of a Hollywood producer contracted to film a fake war on the eve of the presidential election, hoping to distract voters from a sex scandal rocking the incumbent’s campaign. A satire on political mudslinging, “Wag the Dog” mocks the power of optics and propaganda in American elections.

Campaign-crippling scandals have a strange propensity to crop up around October, perfectly timed to inflict maximum damage before the general election in November. So-called October surprises have influenced presidential elections going back to 1972, when the phrase first came into use.

It all began the previous weekend, when self-acclaimed GOP hitman Roger Stone announced that “Hillary Clinton is done” in an ominous tweet that referenced WikiLeaks.

The media instantly speculated that WikiLeaks founder Julian Assange was about to make good on his promise to release another wave of hacked Clinton emails. Assange scheduled a press event from the Ecuadorian embassy in London the following morning, but his appearance was canceled due to “security fears.” But at 3 a.m. Eastern time on Tuesday, Assange recorded a live video in Berlin as Trump supporters eagerly awaited an October surprise that could finally bring down the hated Hillary Clinton.

Assange failed to deliver the anticipated blow, however, saying he had no intention of breaking news before the crack of dawn. “I’ve seen the internet and I understand there are enormous expectations in the United States,” he said. “But if we’re going to make a major publication, we won’t do it at 3 a.m.” He dedicated the rest of his screen time to celebrating WikiLeaks' 10-year anniversary.

When it comes to hijacking the news cycle, Assange and WikiLeaks have a track record. On the eve of the Democratic National Convention, for example, WikiLeaks posted a cache of emails on its website that altered the tone of the convention, and further strained the relationship between Clinton and Bernie Sanders supporters.

On Friday around 4:30 p.m. Eastern, WikiLeaks finally published a batch of embarrassing emails apparently sent by Clinton campaign chair John Podesta. But if the goal was to dominate the news cycle, the release was a whisper too late.

Less than an hour earlier, the Obama administration preempted Assange’s limelight by undercutting his website's credibility. Around 3:45 p.m., the Department of Homeland Security and the Office of the Director of National Intelligence released a joint statement formally declaring that the Russian government was responsible for the email thefts from political organizations.

“Recent disclosures of alleged hacked emails on sites like DCLeaks.com and WikiLeaks and by the Guccifer 2.0 online persona are consistent with the methods and motivations of Russian-directed efforts,” the statement read. “We believe, based on the scope and sensitivity of these efforts, that only Russia’s senior-most officials could have authorized these activities.”

The revelation was not exactly groundbreaking. For months, American intelligence agencies suspected the Kremlin was somehow involved in the cyber attack. Back in July, intelligence officials were already telling the White House they had “high confidence” Russia was behind the thefts.

The joint statement released on Friday did not indicate what new information or developments enabled the intelligence community to confirm its suspicions. It merely referenced similar incidents that have transpired in Eastern Europe.

“Such activity is not new to Moscow — the Russians have used similar tactics and techniques across Europe and Eurasia, for example, to influence public opinion there. These thefts and disclosures are intended to interfere with the U.S. election process.”

DHS not only rebuked the Russian government, but also the journalism organizations that authorized the email disclosures. The announcement was picked up by every major news site and, for about 20 minutes, talk about the bromance between Donald Trump and Russian President Vladimir Putin dominated the cable news networks.

That is, until the Washington Post released its shocking video that featured Trump boasting about sexually assaulting women. Trump's lewd comments were the last straw for many on-the-fence Republicans and provided empirical evidence that Trump has the temperament of a teenager.

It was an October surprise unprecedented in the history of presidential elections, and mainstream media ate it up instantly.

Thirty minutes later, WikiLeaks would tweet its first link to the hacked Podesta emails, but by that time the media and the American people were too obsessed with Trump's creepy braggadociousness to concern themselves with leaked emails.

Conservative news outlets like Fox News and the Daily Caller tried desperately to put the emails front and center, but the damage to the GOP nominee was already done. Republican lawmakers had reached a tipping point with Trump, and this revelation gave some of them the cover they needed to abandon their party’s nominee.

In the coming days, iconoclast writers such as Vice columnist Michael Tracey tried to focus the attention on the newly released Podesta emails, to little avail. WikiLeaks' motives were now in question, and the joint statement from the intelligence community empowered Clinton staffers to brush off all questions about the contents of the emails.

“Media needs to stop treating WikiLeaks like it is same as FOIA. Assange is colluding with [the] Russian government to help Trump,” Clinton press secretary Robby Mook tweeted after the debate.

The Post's October surprise, obtained by reporter David Fahrenthold, is still sending ripples through the political atmosphere — and will continue to do so after Nov. 8.

Earlier Friday morning, Fahrenthold received an anonymous phone call alerting him to the story, which sparked a race to publish since "Access Hollywood" and NBC were also aware of the tape.

The timing couldn't have been more convenient for Clinton, who was likely bracing herself for the new WikiLeaks release.

On the Tuesday following the second presidential debate, John Podesta told reporters that it was “reasonable to assume Roger Stone had advance knowledge” of the email leaks, so it’s not a stretch to conclude the Clinton campaign knew about the email dump ahead of time.

Who leaked the "Access Hollywood" tape to Fahrenthold? We may never find out, but that person was the real star of this election cycle, unleashing the greatest of all October surprises. Shortly after the Post went live with the video, the newspaper's internal tracking system crashed from too much traffic.

In this election, it often seems like substantive issues have taken a backseat to political tactics, and as we approach the 11th hour of the 2016 election, other scandals are sure to surface.  The more this election goes off the rails, the more “Wag the Dog” seems like a documentary.