The new "American Idiot": Why Drive-By Truckers' "American Band" is essential listening in the Trump era 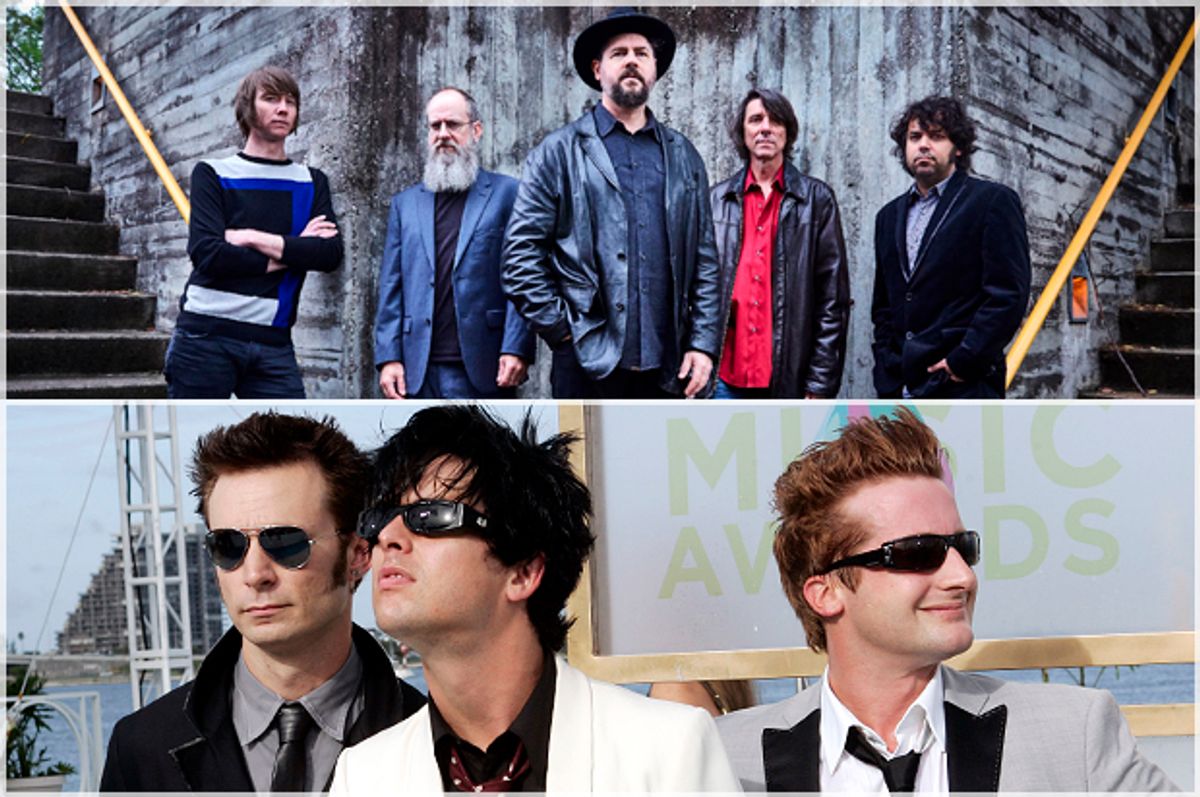 Rock music’s best protest album in years wasn’t supposed to happen—or at least, the band who made it hoped it wouldn’t be necessary. Patterson Hood, a lead vocalist of the Drive-By Truckers, penned “What It Means” in response to the deaths of Trayvon Martin and Michael Brown, unarmed black teenagers whose killings sparked the Black Lives Matter movement. “If you say it wasn't racial,” Patterson wrote in 2014. “When they shot him in his tracks/Well, I guess that means that you ain't black.”

Drive-By Truckers, who released the acclaimed LP “English Oceans” the same year, posted the lyrics to its Facebook page, and the band knew that it had touched a nerve. The post sparked hundreds of comments. Some fans were outraged and branded the Truckers as anti-police, while others applauded the shifted focus on race. “It was like either I've fucked up, or I’m onto something,” Patterson told Rolling Stone. Hood thought the track might be better saved for one of his side projects, which include Patterson Hood and the Downtown 13 and his solo outings, or maybe it would seem dated and he wouldn’t use it at all. What if, two years after Michael Brown’s murder, America finally stopped killing black people in cold blood?

That was not to be the case. 2016 has added numerous names to an increasingly long list of black Americans who have lost their lives due to police brutality. In September, the death of Keith Lamont Scott ignited a days-long protest in Charlotte, North Carolina. Police claim that Scott was armed and posed a danger to officers, who then opened fire on the 43-year-old. But his family claimed that Scott, who had become disabled after a brain injury, was holding a book at the time of his death. Officers fired on Alfred Okwera Olango, a 38-year-old Ugandan refugee, for having a vape pen.

“What It Means,” which has become increasingly relevant since it was written, would come to form the backbone of “American Band,” one of the finest albums of the year. Tracks like “Surrender Under Protest,” “Ever South,” and “Guns of Umpqua” examine generations of racial injustice in a country that shoots first and asks questions later. “Ramon Casiano,” the album’s opening number, derives its name from a Latino teenager gunned down in 1931 by Harlon Carter. “It all started at the border,” co-lead vocalist Mike Cooley sings. “And that’s still where it is today.” Carter would later go onto become the Vice President of the National Rifle Association, the national lobby group that has advocated against stricter gun control laws.

The shadow of Casiano’s killing, which Carter claims was in self-defense, looms large over “American Band.” On the band’s eleventh record, Drive-By Truckers deal with themes of racial animus, immigration, and gun violence. After coming home from the War in Afghanistan, the unnamed narrator of “Guns of Umpqua” finds himself barricading the doors to stop his classmates from being murdered in the Umpqua Community College shooting of 2014. The song blends the storytelling of John Cougar Mellencamp with the reality of modern-day America, a nation that has failed to stop young people from being killed in cold blood. “My friend Jack is having a baby,” Hood sings. “And I see a bird soaring through the clouds outside my window/Heaven is calling my name from the hallway outside the door.”

“American Band” is to 2016 what “American Idiot” represented for the Bush era — a protest album that rages against the political machine. The record will widely be read as an allegory for Donald Trump’s bid for the White House, a campaign that has given white supremacists and extreme right-wing groups an unprecedented national platform for bigotry. The Truckers, however, historicize the roots of hate on “Surrender Under Protest” by returning to a familiar subject: the complicated legacy of slavery in the South. Following the 2015 shooting of nine people at the Emanuel African Methodist Episcopal Church in Charleston, South Carolina removed the Confederate Flag from its state capitol building.

Hood wrote about the flag’s removal in an essay published in the New York Times Magazine last year. As the singer explains, the Stars and Bars are often referred to as a symbol of “heritage, not hate,” but that’s difficult to reconcile with the history of the Confederacy, where the flag has been flown by groups like the Ku Klux Klan. He claimed that this is endemic of the “Southern character.” “The South loves myths and legends, and while they may have roots in the truth, they often overlook certain complexities,” he writes. “We raise our children steeped in ‘Gone With the Wind’ folklore and pretend that all the things we saw in ‘12 Years a Slave’ didn’t happen.”

Over the years, the Confederate Flag has become increasingly associated with the genre Drive-By Truckers occupies, albeit reluctantly: southern rock. The loosely defined sound evokes a certain type of ideal, a vision of Southern pride that rarely deals with the ways in which that concept has been used against anyone who wasn’t white. Lynyrd Skynyrd, more than any other band, exemplifies that tradition. In its iconography, the group’s name is often emblazoned over the Stars and Bars. The Truckers have never shied away from its messy musical legacy, while also acknowledging, as in songs like "Neil and Ronnie" which invokes the musical feud between Neil Young and Skynyrd, the realities and complexities of race relations in the South. “Neil helped carry Ronnie in his casket to the ground,” Hood sings. “And to my way of thinking, us southern men need both of them around.”

Although Skynyrd was apolitical during its heyday, the band has undergone a right-wing conversion in recent years, playing the Republican National Convention multiple times. Charlie Daniels, whose “The Devil Went Down to Georgia” remains a staple of classic rock radio, played alongside the remaining members of the band in 2004. Daniels, a one-time Jimmy Carter supporter, has followed the conservatism of his genre. A bonus track on his 2001 live album with the Charlie Daniels Band is aimed directly at U.S. Muslims: “This ain’t no rag/It’s a flag/And we wear it on our heads.”

Genres that appeal to listeners south of the Mason-Dixon line aren’t generally known for liberalism. Shortly after Toby Keith threatened to “put a boot in [the] ass” of America’s enemies, the Dixie Chicks were widely protested for their criticism of President George W. Bush in 2003. Longtime fans of the all-female group burned their albums, while radio stations pulled the Chicks’ cover of Stevie Nicks’ “Landslide,” then a top-ten hit, from circulation. The song virtually disappeared in a matter of weeks. That reactionary spirit earns a mention on the Trucker’s “Once They Banned Imagine,” which deals with 2001 decision to ban “Imagine,” John Lennon’s classic anti-war ballad, from Clear Channel stations: “With or against, something been out to get us/And it looked like something finally did.”

As a protest and a historical document, the power of “American Band” is the way in which it brings together genres that are too rarely in conversation. Drive-By Truckers, who recorded the album in just six days, were inspired by socially conscious artists like Beyoncé, Run the Jewels, and Kendrick Lamar, all of whom speak to the trauma of black America during a time of unrelenting violence. For those who haven’t picked up “Lemonade” or “To Pimp a Butterfly,” an album like “American Band” is an important bridge to the wider conversation.

Hood understands first-hand what it means to bring together these divided communities through song. The musician is the son of David Hood, who was a member of the famed Muscle Shoals Rhythm Section. Located in Sheffield, Alabama, the Muscle Shoals Sound Studio housed some of the most important acts of its time—including Aretha Franklin, Bobby Womack, Percy Sledge, and Wilson Pickett. These were artists who were giving voice to the pain and the joy of a community fighting for its civil rights during the tumultuous 1960s, and their session musicians just happened to be white. Fifty years later, black musicians keep leading the way, but “American Band” proves that their allies in the industry belong right alongside them.