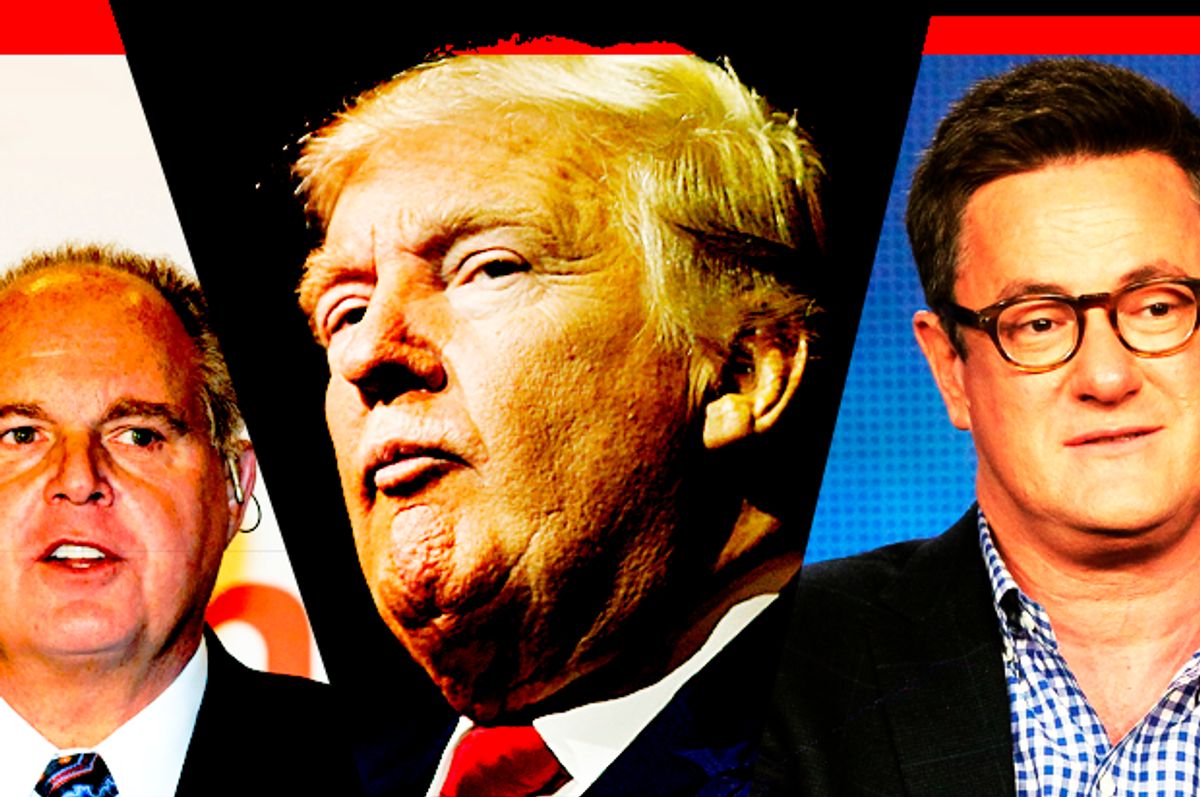 With the benefit of hours-old hindsight, it now seems inevitable that, with less than a month to go before the United States likely elects its first female president, the top trending topic on Twitter would be #repealthe19th. The hashtag was started by angry supporters of Republican candidate Donald Trump in response to a FiveThirtyEight analysis by Nate Silver showing that Trump would win in a landslide if women didn't have the right to vote. That led to this demand, facetious or otherwise, that the United States end women's suffrage.

For good reason, Trump's rise has largely been attributed to the forces of white nationalism engaged in a backlash against the first black president and growing racial diversity. But the past couple of weeks have demonstrated that this election is also a referendum on the question: Are women people?

It's worth taking a moment to go back all the way to last week and consider Trump's comments about the wrongful conviction of five teens, known as the Central Park Five, for the rape and beating of a jogger in 1989. Trump was heavily involved in the case at the time, taking out ads demanding the death penalty for the defendants. He refuses to apologize even in the face of overwhelming evidence that someone else committed the crime.

"They admitted they were guilty,” Trump said to CNN's Miguel Marquez last week. He did not acknowledge extensive research showing that the police interrogation techniques that the five teenagers were subjected to are well known for causing false confessions.

Shortly after Trump said this, the "grab them by the pussy" "Access Hollywood" video was released. In it, Trump confessed — bragged, really — to its NBC host Billy Bush about sexually assaulting women and getting away with it.

Unlike the confessions of the Central Park Five, Trump's confession was not coerced. On the contrary, he comes across as a man who is dying to talk about how he can do whatever he wants to women.

Since then, there's been an explosion of women coming forward with stories of being on the receiving end of exactly the behavior Trump was describing.

And yet, Trump and his allies are dismissing his remarks as "locker-room talk" and MSNBC's Joe Scarborough is wanking on that he's "skeptical about the timing of all of this."

The double standard in play here is largely about race, of course. As Jamelle Bouie of Slate noted, Trump has a history of painting black people "as helpless brutes leading disordered, degenerate lives."

But it also goes back to Trump and his supporters treating women not as people but as objects to be owned and controlled by men.

If you look at women that way, the attitudes of Trump and his supporters make sense. Trump gets to grab all the pussy he wants because women's bodies are objects put on this planet for his personal use. With the Central Park case, the truth of what happened matters less to Trump than the opportunity to use a woman's body in his racialized drama about the dangers that black men supposedly pose to white men's women.

Even the Republicans who are disavowing Trump do so in language that reinforces this notion that women are objects that men own, instead of people in their own right. Most Republican men who released statements condemning Trump invoked their wives and daughters, framing sexual violence as a property crime against male-controlled female bodies, rather than a crime against people with rights.

You know what the magic word, the only thing that matters in American sexual mores today is? One thing. You can do anything, the left will promote and understand and tolerate anything, as long as there is one element. Do you know what it is? Consent. If there is consent on both or all three or all four, however many are involved in the sex act, it's perfectly fine. Whatever it is. But if the left ever senses and smells that there's no consent in part of the equation, then here come the rape police. But consent is the magic key to the left.

Limbaugh's rant really distills the struggle between the women-are-people camp and the women-are-objects camp. Valuing consent is about valuing women's humanity. As people, women should be able to make their own choices about whom they have sex with and under what circumstances.

But Limbaugh, as he makes exquisitely clear here, thinks of women more as objects, to be used and controlled by men. His dripping distance for the concept of "consent" is contempt for the idea of women as autonomous people. We are objects for male use, in his eyes. If a man wants to grab a woman's pussy, then who is she to say no? Maybe her husband or father or priest has the power to say no, but not her. Giving that authority to the woman makes someone the "rape police," which is apparently a bad thing to be.

This is the same Limbaugh, of course, who spent days railing about how pro-choice activist Sandra Fluke is a "slut" and a "prostitute" because she argued that birth control should be covered by insurance plans.

In the same multiday rant, Limbaugh argued that any woman who uses insurance to cover birth control should be forced to give sexual access to any man who wants it: "If we are going to pay for your contraceptives, and thus pay for you to have sex, we want something for it. And I'll tell you what it is. We want you to post the videos online so we can all watch."

The thread that holds all this together is a disavowal of women's right to autonomy and an assertion that our bodies and the decision-making power over them should belong to men. There's an elaborate distribution scheme to handle which men get to control which female bodies: Virgins belong to their fathers, wives to their husbands, some women get categorized as "sluts" and can be manhandled at will. Apparently any man who has the same insurance plan as you gets to view porn about you at will. But ultimately, the decision-making power over a woman's body belongs to anyone but the woman.

It's not surprising that misogynists feel defensive these days. Anti-rape activism is on the rise and being boosted by a prominent White House task force. The Supreme Court ruled in favor of abortion rights in June, and Planned Parenthood continues to survive multiple attacks. And now we're going to have a female president.

On Thursday, there were competing speeches on the subject of sexual harassment and assault. From Trump, of course, we got this incoherent rant where he denied all of it, and capped it all off by apparently claiming that one of his accusers is too ugly to grope, as MSNBC's Katy Tur pointed out in a tweet.

Trump on people mag writer: "Look at her, look at her words, you tell me. I don’t think so."

But Michelle Obama gave a speech in New Hampshire with another message, one about how women are not putting up with this crap anymore.

"And I can't believe that I'm saying that a candidate for president of the United States has bragged about sexually assaulting women," Obama said. "And I have to tell you that I can't stop thinking about this. It has shaken me to my core in a way that I couldn't have predicted."

As Obama spoke, the women in the crowd can be heard murmuring their assent as she put Trump's behavior in a larger social context:

It's like that sick, sinking feeling you get when you're walking down the street minding your own business. Some guy yells out vulgar words about your body. Or when you see that guy at work that stands just a little too close, stares just a little too long, you feel uncomfortable in your own skin. It's that feeling of terror and violation that too many women have felt when someone has grabbed them or forced himself on them and they've said no but he didn't listen.

In the last month of this election cycle, these contrasting speeches demonstrate how much this campaign has become about the question of whether women are people. In Trump's view, the answer seems to be no. Instead, he paints women as objects who can be safely dismissed by saying they're not hot enough to be bothered with.

First lady Michelle Obama, in contrast, speaks directly to women who are sick of this shit. Women are more than a bunch of boobs and butts to be rated on a scale and discarded if we don't meet the standards of some jackass. We're more than baby buckets who will be forced to reproduce whether we like it or not. We aren't toys to be picked up and played with by any man who wants it. Nor are we our father's property, whose sexuality needs to be controlled so that we don't lose our resale value.

Women are people and, as Trump supporters have learned to their consternation, we have the right to vote. It's a right, I suspect, will be exercised vigorously come November.