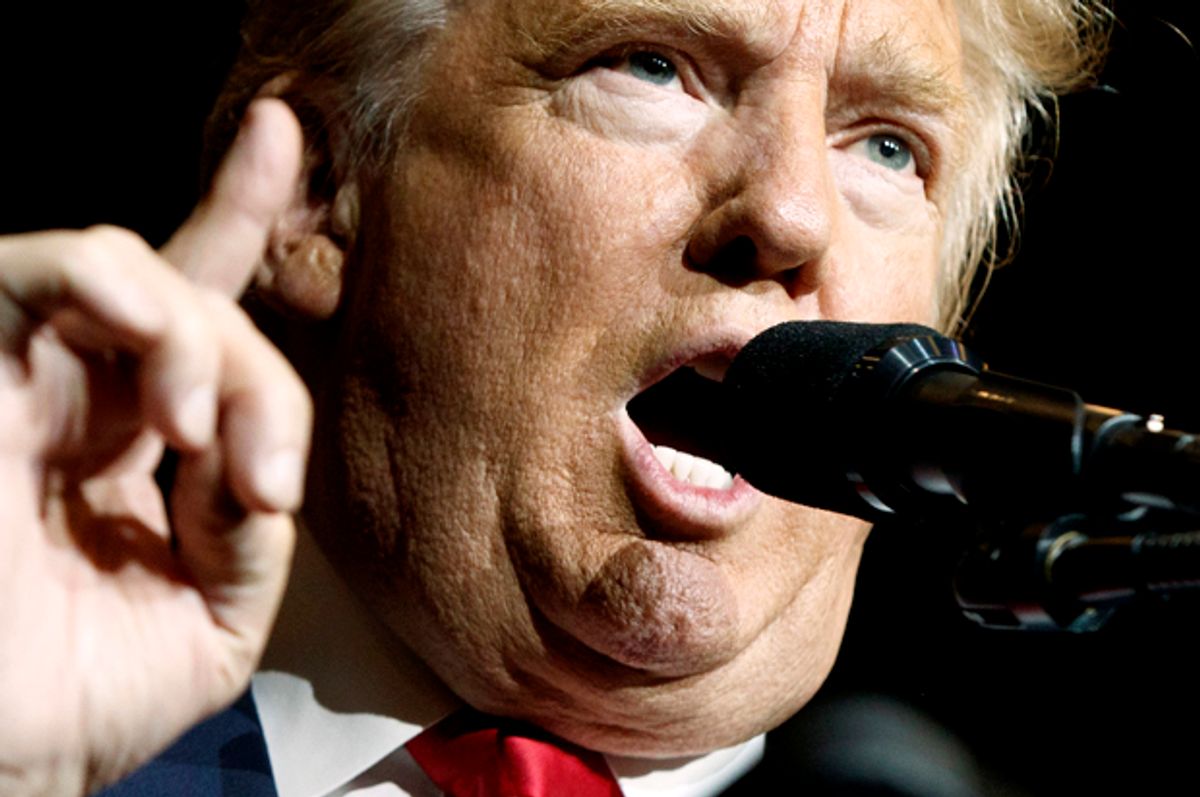 Donald Trump made his first public remarks this afternoon following a wave of allegations from women who claim he has sexually assaulted them over the years, and it was absolutely insane. We’ve seen a pattern thus far from Republican presidential nominee Trump in which he reacts to bad campaign news by sounding increasingly authoritarian and conspiratorial, and today was a continuation of that theme.

The Republican presidential nominee espoused a fringe conspiracy theory about “international banks” conspiring to undermine U.S. sovereignty. He called former president Bill Clinton and Democratic nominee Hillary Clinton “criminals” who have orchestrated a massive cover-up of their alleged crimes, and he lashed out at the women who came forward to accuse him of assault, suggesting that one of them wasn’t attractive enough to merit his sexual advances.

If that sounds crazy, that’s because it was.

Speaking to supporters at his Mar-a-Lago resort in West Palm Beach, Florida, Trump opened up his remarks by claiming that a global cabal of shadowy “special interests” had looted the American economy and destroyed local manufacturing. “The Clinton machine is at the center of this power structure,” Trump said.

“We’ve seen this first hand in the WikiLeaks documents, in which Hillary Clinton meets in secret with international banks to plot the destruction of U.S. sovereignty in order to enrich these global financial powers, her special-interest friends and her donors,” he added.

Rhetoric like that is sometimes described as “New World Order” conspiracy theories, which posit that there is a coordinated, hiding-in-plain-sight effort underway by “them” — bankers, secret societies, Jews, socialists, whoever — to eliminate national boundaries and rule over a totalitarian global state. This sort of nonsense is the meat of much of Alex Jones’ lunatic commentary. Trump, representing the Republican Party and finding himself backed into a corner, is now committed to boxing with these shadows.

Setting up the Clintons as the leaders of a vast global conspiracy was the transition Trump needed to defend himself against the rash of sexual assault allegations he’s now facing. First, he called the Clintons the true lawbreakers. “The Clintons are criminals. Remember that. They’re criminals,” Trump said. “This is well-documented, and the establishment that protects them has engaged in a massive cover-up of widespread criminal activity.”

Then he turned his attention to the women he allegedly sexually assaulted. “Another ridiculous tale, no witnesses, no nothing,” Trump said, referring to The New York Times report that he groped a woman on an airplane in the 1980s. “These events never, ever happened,” Trump added, “and the people that said them, meekly, fully understand. Take a look at these people. Study these people, and you’ll understand also.”

When it came to the People magazine reporter who alleged in a wrenching account that Trump forced himself on her during an interview, Trump dismissed her claim and then pretty much called her too ugly to assault. As Trump put it: “Look at her. Look at her words. You tell me what you think. I don’t think so.”