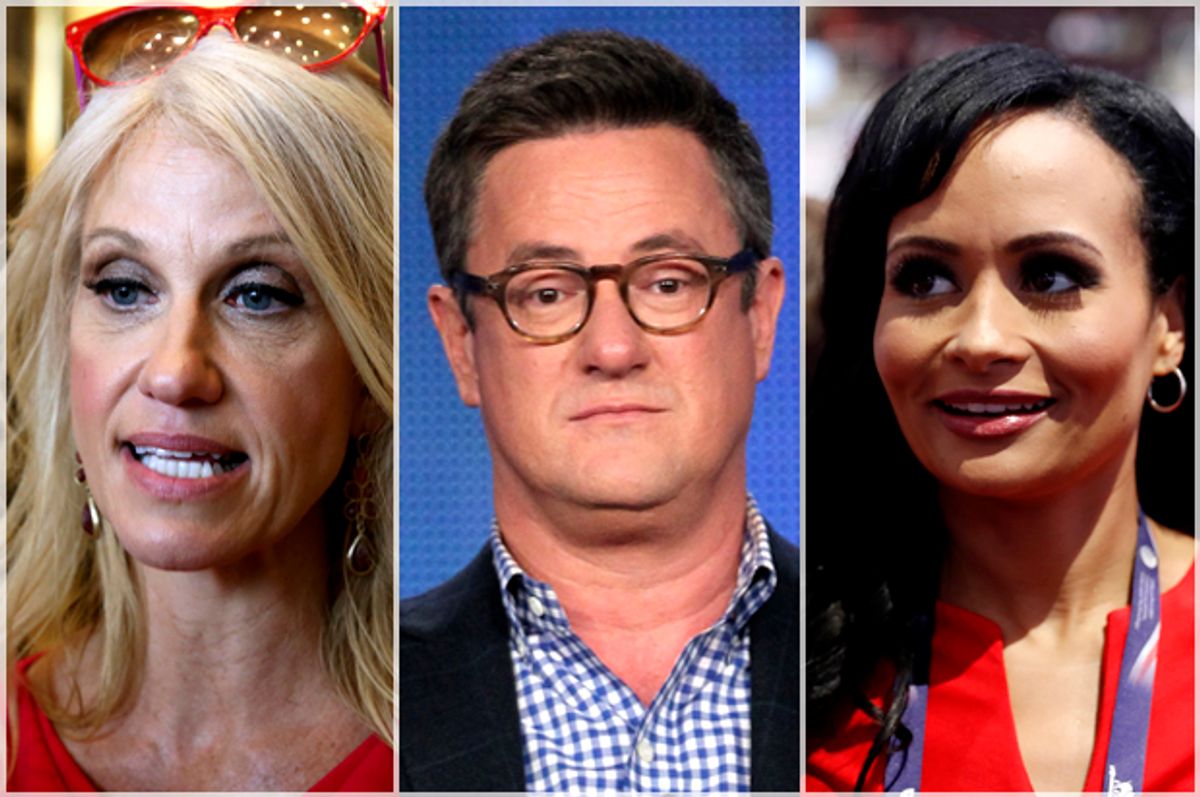 As more and more sexual assault allegations pile up against him, Republican presidential nominee Donald Trump’s political team is in full damage control mode. Their approaches have been diverse, but the aim is clear: deflect attention from Trump’s allegedly sordid history.

We can start with some recent tweets by Trump himself:

The phony story in the failing @nytimes is a TOTAL FABRICATION. Written by same people as last discredited story on women. WATCH!

Why didn't the writer of the twelve year old article in People Magazine mention the "incident" in her story. Because it did not happen! — Donald J. Trump (@realDonaldTrump) Oct. 13, 2016

Trump has had lots of support from his surrogates and other friends:

MSNBC's Joe Scarborough, Thursday: After saying he was “skeptical about the timing” of the claims made against Trump and even referring to them as an “October surprise,” Scarborough elaborated, “I'm talking about the timing of all of this dropping. Talk about an October surprise. There have been 1,000 triggering events that would've made sense. If I had been sexually harassed by this man, the Megyn Kelly story would've given me and opportunity."

Later he also said: "There have been 1,000 reports of this already. I'm just asking why all the sudden this stuff is dropping in October. Perhaps it's all innocent. Perhaps there's no oppo drop. Perhaps it's not coordinated."

Katrina Pierson, Wednesday: Trump spokeswoman Katrina Pierson appeared on CNN to question a claim by Jessica Leeds that Trump had lifted an armrest on a flight so he could grope her. Because the alleged incident would have occurred in the early ’80s, Pierson insisted that Trump couldn’t have moved up the armrest as Leeds claimed.

Ben Carson, Tuesday: The former Republican presidential candidate has taken perhaps the most conspiratorial line in defending Trump. “There’s an atmosphere that’s been created by The New York Times and others that says, Look, if you’re willing to come out and say something, we’ll give you fame; we’ll give you whatever you need,” Carson told the assembled hosts of “Fox and Friends,” before adding, “What a bunch of crap.”

Rep. Blake Farenthold, Tuesday: During an appearance on MSNBC, Rep. Farenthold dismissed Trump’s comments as “locker room talk” and added “until he does something so bad to make him worse than Hillary [Clinton], I'm still in.”

He later apologized for what some perceived as his cavalier attitude toward rape, saying, "During an interview on MSNBC with Chris Hayes tonight, I was thrown off by the anchor’s use of a hypothetical question. I do not and have not ever condoned rape or violence against women. That is not the kind of man I believe Donald Trump to be."

Kellyanne Conway, Sunday: Trump’s campaign manager has defended the Republican nominee by using the same tactic he employed repeatedly during the second debate — namely, drawing attention to the infidelity and rape allegations made against former president Bill Clinton.

“We never want to talk to the women shamed and blamed by Hillary Clinton because they had sexual contact with her husband,” Conway proclaimed to CNN host Brianna Keilar, arguing that the media has been biased by focusing so much on Trump without doing the same thing for the Clintons.

Rudy Giuliani, Sunday: “Talk and action are two different things,” insisted the former New York City mayor on NBC's "Meet the Press." He also claimed that Trump had provided “a full and complete apology” for his remarks.