New hope for undocumented immigrants: DAPA might not be dead — a bold legal strategy could protect millions from deportation 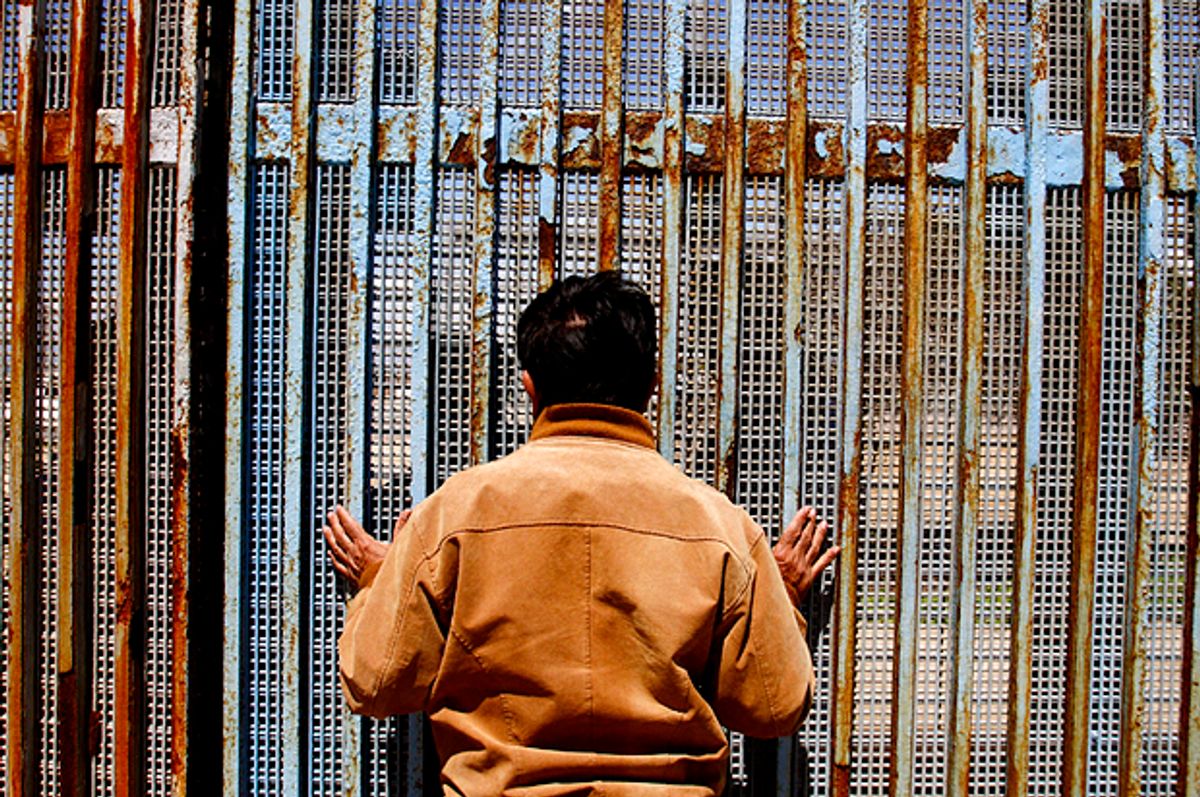 In June, the eight-member Supreme Court deadlocked over a major federal program to protect millions of undocumented immigrants from deportation, leaving a lower court’s preliminary injunction blocking Deferred Action for Parents of Americans and Lawful Permanent Residents, or DAPA, in place. At the time, it was widely understood that this was “effectively ending what Mr. Obama had hoped would become one of his central legacies.”

Not so fast. In August, Martín Jonathan Batalla Vidal, an undocumented immigrant residing in Queens who moved to the United States when he was seven years old, filed a lawsuit in a New York federal court contending that the preliminary injunction, issued by a federal judge in Texas and affirmed by the New Orleans-based Fifth Circuit Court of Appeals, doe not apply to him. He lives within the Eastern District of New York. And so why, he asks, should U.S. District Judge Andrew S. Hanen, sitting in Brownsville, Texas, restrict his rights?

Yesterday, José Lopez filed a similar lawsuit in the U.S. District Court for the Northern District of Illinois. More of these legal end runs could be on the way.

"The New York and Illinois challenges to Hanen’s Texas injunction are a natural consequence of the legal vacuum left by the short-staffed Supreme Court’s failure to rule in U.S v. Texas earlier this year," David Leopold, former president of the American Immigration Lawyers Association and counsel to various reform groups, told Salon via email. "As a legal strategy challenging the Republican injunction outside the 5th Circuit is smart and effective because it uses a potent legal argument to ask a simple question: Why does a federal judge in Brownsville, Texas think he has the power to make decisions affecting the rights of millions of immigrants across the country who’ve never set foot in his courtroom and over whom he has no jurisdiction?"

The upshot is a strategy that could protect millions from deportation but that also poses some very strange legal questions without much if any precedent — and that might make for a bit of judicial chaos.

Judge Hanen’s February 2015 decision to issue a nationwide injunction was widely criticized as extraordinary and harmful. However, judges do at times issue nationwide injunctions and typically, say experts, one federal court is inclined to avoid conflict with another in such cases. But this is no typical year, and the shorthanded Supreme Court has proven itself unable to act as the dispute’s final arbiter. If Judge Nicholas G. Garaufis rules that the injunction does not apply in his New York district, the federal government will find itself in the uncomfortable position of disobeying one of two judges. And whichever judge they cross could very well end up holding them in contempt.

“I’m unaware of a federal judge consciously issuing an injunction that conflicts with another federal court’s injunction,” said Samuel L. Bray, a professor at UCLA School of Law. “A reason that is not done is the possibility that federal officers will be subject to contempt no matter what they do.”

That’s why the Obama Administration, which has vigorously opposed Judge Hanen’s injunction, is nonetheless fighting Vidal’s lawsuit and will no doubt fight Lopez's as well.

President Obama announced DAPA in November 2014, which would have protected an estimated five million undocumented immigrants from deportation and provided them with work permits. The policy also extended the work permits provided to undocumented immigrants who arrived in the U.S. as children — the DREAMers — covered by Deferred Action for Childhood Arrivals, or DACA, from two to three years. That all came to a screeching halt when Judge Hanen, well-known to hold strident conservative views on immigration matters, issued a preliminary injunction blocking the actions nationwide in response to a lawsuit brought by Texas and a bevy of other conservative-led states and Republican governors. The conservative Fifth Circuit affirmed that ruling and, in June of this year, a Supreme Court compromised of eight since Justice Antonin Scalia’s death split 4-4, leaving the lower court ruling in place.

Vidal and Lopez are covered by DACA, not DAPA. They had received three-year work permits which were then rescinded and replaced with a two-year permit after Judge Hanen’s ruling. The lawsuits ask the U.S. District Court for the Eastern District of New York and the federal court in Illinois to declare that Hanen’s nationwide injunction is actually limited to the three Southern states — Texas, Mississippi and Louisiana — under the Fifth Circuit. They are also asking that the judges to compel the Department of Homeland Security to reinstate their three-year permits, contending that revoking them was a violation of a federal law called the Administrative Procedure Act.

Judge Garaufis seems inclined to Vidal's argument. In a pre-motion conference in late September, he announced that he had “absolutely no intention of simply marching behind in the parade that's going on out there in Texas, if this person has rights here.”

“I sympathize with your problem,” he told the government, “but I do not sympathize with the idea that I am hamstrung in dealing with an issue involving individual rights and including the right to go make a living and have a life as an immigrant in the United States.” How, he asked, could a judge in one jurisdiction “issue a nationwide injunction if someone comes to him with a claim that affects the rights of people in” another jurisdiction “who have not been before the court?”

One judge in Texas and a handful of others in New Orleans shutting down a centerpiece of President Obama’s immigration policy is not how most Americans would hope that the system of checks and balances functions. But the legal questions arising from this case are as strange as immigration politics are contentious, and nobody knows what exactly to expect if the judges rule in Vidal and Lopez's favor.

District judges have equal power, and one typically can’t tell another what to do in their jurisdiction — it’s the circuit courts that boss the district judges under them around. And those circuit courts, like all courts, are subject to the U.S. Supreme Court. In the case of U.S. v. Texas, the Fifth Circuit affirmed Judge Hanen’s decision, including the nationwide preliminary injunction. But the Supreme Court’s response was a succinct and opaque “The judgment is affirmed by an equally divided Court.”

Melissa Keaney, an attorney at the National Immigration Law Center, the organization that is representing Vidal and Lopez, says that the split decision doesn’t mean that the Supreme Court has affirmed the nationwide scope of Judge Hanen’s injunction.

“The argument is that when the Supreme Court splits as it did,” she said, “it creates no precedent so it's almost as if it didn’t decide anything.”

As a consequence, she argues, the split decision means that the injunction applies only in in the Fifth Circuit and is not binding elsewhere.

But that’s precisely what is up for debate. A thorny issue that Judge Garaufis and others must tackle is whether to give any special weight to Judge Hanen’s injunction given the split decision. It’s a matter, said William Baude, a professor at the University of Chicago Law School, of “how to interpret Supreme Court silence.”

What’s more, said Baude, the Supreme Court has never even resolved whether a district court judge can issue a nationwide injunction like that issued by Judge Hanen. If the New York and Illinois judges issue conflicting rulings, it might push the high court to weigh in again.

“I would expect the Supreme Court to take the case again,” said Baude. “They might be able to reach an agreement on which of the two conflicting orders governs even if they can’t agree on anything else.”

One possibility if the Supreme Court did take the case is that they would explicitly uphold Judge Hanen’s nationwide injunction. That’s unlikely given that the court’s four more liberal justices already voted against it. They could also decide that Vidal simply does not have a right to challenge his three-year permit being revoked. Or they could rule to leave Judge Hanen’s ruling in place in the Fifth Circuit but find that it does not apply nationwide. And they could do so while sidestepping a major decision about federal judges issuing nationwide injunctions in general by limiting their ruling to this specific case or cases like it. That would be easy in this case because, said Keaney, there is precedent that injunctions cannot extend beyond what is necessary to address the harms claimed by plaintiffs, which in this case would be limited to Texas.

Whatever the outcome, said Baude, the Supreme Court split on DAPA has meant that “really technical lawyerly doctrines, which are normally left to boring civil procedure” have now “become really politicized too.”

But the doctrines, however dense with legal minutiae, matter a lot, and not just for immigration.

“The question of these sort of nationwide conflicting injunctions obviously implicates the fate of DAPA but it also implicated most recently the Affordable Care Act, ‘Don't ask, don't tell’ and a series of major environmental regulations— all of which were subject to a nationwide injunction by a lower court,” said Baude. “And I expect we’ll see it coming up again in future litigation about global warming, Dodd-Frank and whatever the next administration does.”

The DAPA case also highlights another big problem with allowing federal judges to issue nationwide injunctions, which is that it incentivizes challengers to “venue shop” for a judge who they believe will rule in their favor. Critics, including President Obama, have accused the states that filed the challenge of having done just that in this case. Judge Hanen did little to disabuse anyone of that notion when he ordered D.C.-based Justice Department lawyers appearing in twenty-six different states to take ethics courses and demanded that the government hand over an expansive list of the names and addresses of young people who had benefitted from an extended work permit.

What made Hanen so mad? The government had, he found, erroneously told him that they had not yet begun putting the new programs in place when in fact they had. Thus, there is every reason to believe that Judge Hanen will be incensed if the federal government abides by a contrary injunction in New York or Illinois.

According to Keaney, challenges similar to those mounted by Vidal and Lopez could be filed elsewhere in the country. Whatever gets decided in New York and Illinois, the short-staffed Supreme Court and the country’s polarized immigration politics guarantee a parade of legal oddities and maybe some huge and surprising wins for immigrants in the months to come.