The spectacle of televised death: "Christine" is a haunting parable of public horror and private anguish 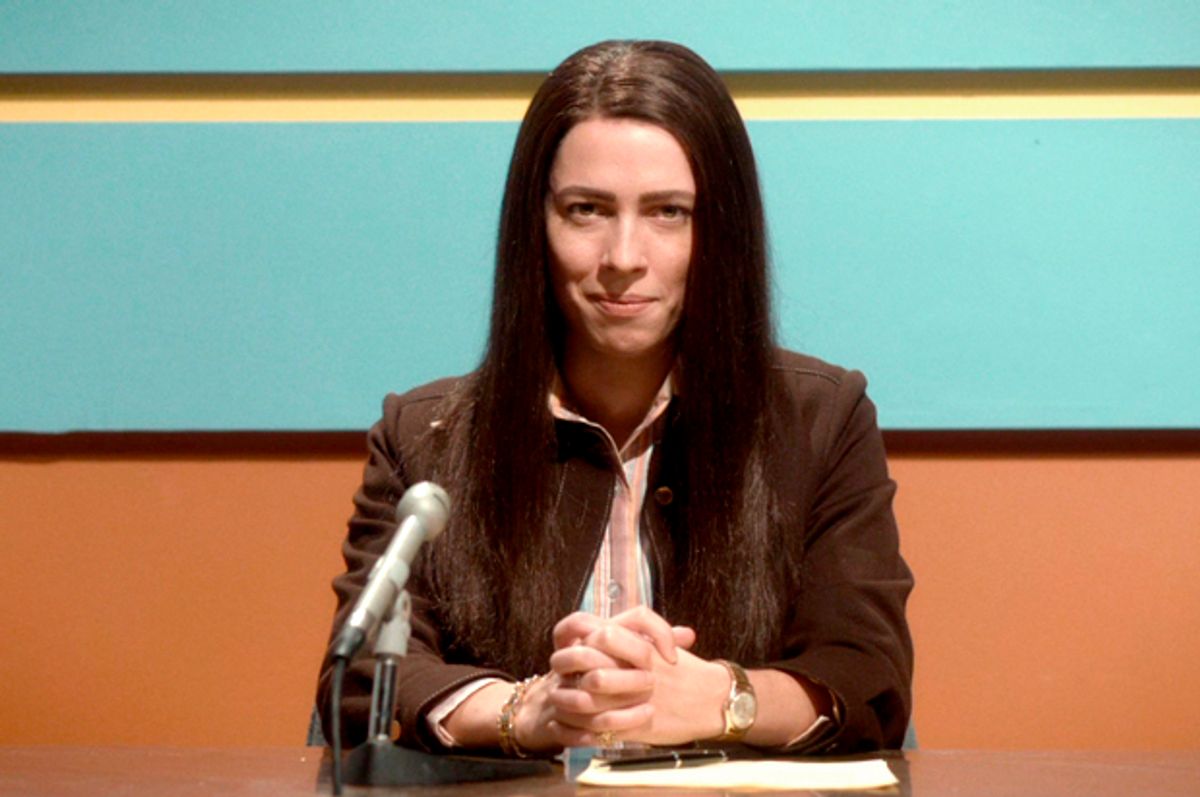 Still from "Christine" (The Orchard)
--

It's impossible to imagine such a moment not going spectacularly, gruesomely viral now. Today, after all, death is always just a click away. Whether the stated intention of the footage is to call out injustice — like the recent shooting of Terence Crutcher — or just the morbid and endless array of MOST GRUESOME DEATHS EVERRRRR, the option of watching the end of a human life while standing at the checkout line is ever present. But things were different in 1974. Things were different on the day that Christine Chubbuck died.

On the morning of July 15, Chubbuck, a 29-year-old Sarastota television reporter and community talk show host, sat at her news desk and read headlines. Then when the footage about a recent shooting wouldn't run, she looked into the camera and reportedly said, "In keeping with Channel 40's policy of bringing you the latest in blood and guts and in living color, you are going to see another first: attempted suicide." She then pulled out a revolver and shot herself in the head. She died 14 hours later.

That video is now considered by many the Holy Grail of lost footage. Earlier this year, former WXLT weatherman Steve Newman claimed, "There is only one copy of that videotape for that last day that exists. Nobody copied it." But the widow of the station's then-owner Robert Nelson also told Vulture in June that her husband did own a copy of the footage and that she long ago gave it to "a very large law firm."

Last week I spoke with Chez Pazienza, a former CNN producer who started in local Florida TV news — at a station that as he recalls "pioneered the bleed/lead format." When I asked him how he thought local news would now handle an event like Chubbuck's on-camera suicide attempt, he offered another interesting perspective on why on the video is so hard to find.

"They wouldn't show it," Pazienza said. "They'd show everything up to that point. The really ghoulish ones would stop the video and just let the sound play through so you hear the gunshot. There's an odd kind of gentleman's agreement in most markets that what happens at another local station isn't news." He added, "It's a fascinating dynamic watching how respectful a local news station suddenly gets when the dead person is one of its own."

For the morbidly curious, though, Chubbuck's death is playing out again this year in two separate films. First, there was "Kate Plays Christine," a docudrama about an actress trying to get inside the mind of the woman whose demise was a tragic media milestone. Now, in director Antonio Campos' drama "Christine," a mesmerizing Rebecca Hall plays the doomed reporter in a fictionalized version of the last days of her life.

Watching "Christine," I was reminded of "Hamilton" star Leslie Odom Jr.'s response last year to the question of whether he ever wished that his character Aaron Burr didn't have to kill Alexander Hamilton. "Every night," he replied. "I feel like every night, when you see a really good production of 'Romeo and Juliet' or something, you should hope that it ends differently."

You similarly know from the opening moments of "Christine" as Hall earnestly conducts a pretend interview with Richard Nixon to an empty chair, how her story will end. You know, like you know how "Flight 93" and "The Imitation Game" end. You know she will take out that gun and put it to her head. Yet watching this woman, this perfectionist, this reporter eager to do service journalism under increasing pressure to deliver more gruesome sensationalism, it's still impossible to not hope for a different outcome.

It's also impossible to not notice how chillingly timely her tale is. When Chubbuck's boss demands "juicier" content and she argues, "It's exploitive," he shoots back, "That's why so many people are watching." The film captures not just the emotional deterioration of its central character but the corrosive effects of immersing in an environment in which vivid tragedy makes for a great workday.

And while Chubbuck's resilient colleague shakes off gloom with ice cream and pop music, that simply doesn't work for someone with her mental health issues. Though it wisely avoids easy explanations for Chubbuck's final act — and her choice to do it on live television — "Christine" is a haunting parable of public horror and private anguish.

My own fascination with Chubbuck began on a winter day in 1987. I was a college student in Philadelphia, and I'd come home from morning classes to see my roommate riveted to the television. The state's beleaguered treasurer, R. Budd Dwyer, had a few hours earlier put a gun in his mouth during a press conference and pulled the trigger.

Dwyer's death — and the media's response — was an instant lesson in journalistic ethical dilemmas. Dwyer had died in a room full of photographers and video cameras, all from different and competing outlets. Now what? Some local stations aired the footage up to the moment Dwyer put the gun in his mouth; Philadelphia WPVI ran it with the entire shooting, both at midday and in the evening. I remember seeing the more sanitized version. And I remember hearing, for the first time, of that other public suicide more than a decade earlier.

The day after Dwyer's death, print publications ran photos with with a gamut of approaches, including ones with him brandishing the gun — and others with it in his mouth. In the 13 years since Chubbuck's on-air shooting, the entire nature of broadcasting had changed. Cable meant that the scramble for "newsworthy" stories was already a bottomless demand. VCRs were already commonplace. The Dwyer footage, even in its still upsetting edited form, was irretrievably out there.

Here's how CBS News covered the Dwyer death at the time:

A full decade later, still pre-YouTube, I attended a screening of odd and weird "censored" videos. Back then, these things were still only obtainable by grainy videotapes, shared clandestinely. Most of them were the kind of broadcasting bloopers and wardrobe malfunctions that are now considered commonplace. And in the midst of the screening, the Dwyer video appeared. I knew immediately what it was. I remember wondering how long I could watch, and if I would look or look away. Then I tightly shut my eyes. The audience I was with went wild.

I get that eagerness; I do. After Dwyer's death, "pulling a Budd" became a callously casual local slang in my college crowd. The idea that this was a human being with a grieving family seemed abstract. But I recently talked to a friend who'd had a colleague in the room with Dwyer that day, who recalled, "The guy was a lobbyist who was good friends with Budd. It was very, very upsetting to him. He saw it as a tragedy of his friend, as opposed to a media spectacle." And I get that part now, too, at last.

By 2002, the internet had shaped the nature of and questions about documenting death even further. When a video of the decapitation of Wall Street Journal reporter Daniel Pearl surfaced, The Boston Phoenix chose to place a link on its website to the video, with an editorial on "political pornography." But many news sites and networks chose instead to discuss the tape without showing it.

Pearl's family has been vocal in its preference. In 2004, The Guardian reported that when Pearl's widow Marianne "heard that CBS was planning to air an edited version of the video of Danny's execution, she got on the phone to a head of the network. 'Oh, I empathize with you,' he said, to which Pearl replied, 'I am talking to a man who is about to broadcast a video of the murder of my husband and I'm about to give birth. Do you empathize with that? Don't give me that shit.' They broadcast the video."

Just last year, Roanoke reporter Alison Parker and videographer Adam Ward were shot to death during a live WDBJ morning broadcast. Images of the shooting ran on the front pages of several newspapers, including the New York Daily News. The footage of the crime is now ubiquitous on YouTube, and has been viewed millions of times.

I've still never watched the Budd Dwyer video with eyes open, though I listened to it again recently. If the Chubbuck tape ever were to emerge, I'm pretty sure I couldn't bear that either. Nevertheless, I find myself continually drawn to their stories. I also know there wouldn't be two current films about Christine Chubbuck if I were alone in being simultaneously fascinated and horrified at death made public.

When I think of the Dwyer tape, though, what I remember most are the pleadings of the other people in the room. I remember the voices yelling, "No, Budd, no, don't do it." The screams and chaos in the room after Dwyer fell. And then, the voice of a man saying, "You got your footage. You got everything that can be gotten."