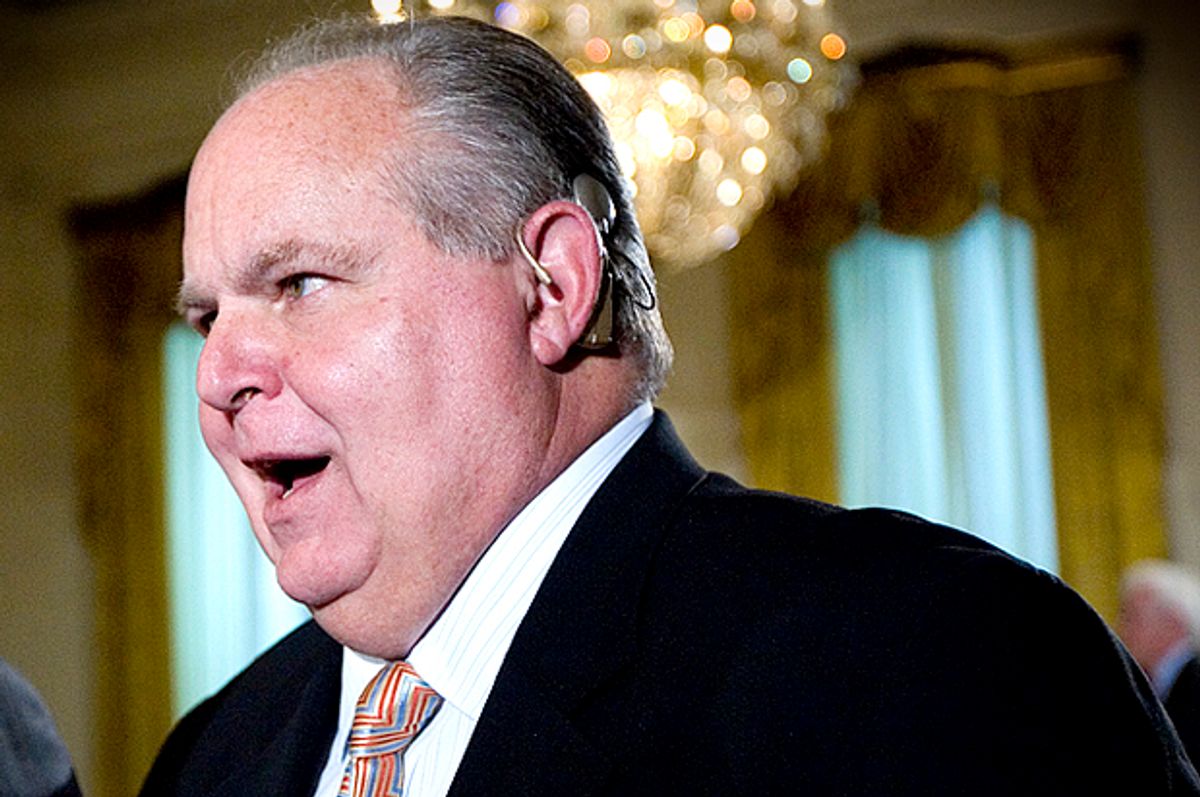 In the wake of recent sexual assault allegations spilling out against Republican presidential nominee Donald Trump, conservative blowhard Rush Limbaugh dismissed the importance of consent, complaining the “only thing that matters” to liberals when it comes to sex is that all parties are willing participants.

Addressing what he referred to as the "Donald Trump sex-talk scandal,” Limbaugh lamented America’s lack of moral standards, marked (it would seem) by the left’s willingness to let other people have whatever kind of sex they please, provided everyone involved wants it.

“You know what the magic word, the only thing that matters in American sexual mores today is?” Limbaugh asked no on in particular on his talk radio show Wednesday. “One thing.”

“You can do anything, the left will promote and understand and tolerate anything, as long as there is one element,” he continued. “Do you know what it is? Consent.”

This is stunning to Limbaugh.

“If there is consent on both or all three or all four, however many are involved in the sex act, it's perfectly fine,” Limbaugh continued. “Whatever it is. But if the left ever senses and smells that there's no consent in part of the equation then here come the rape police.”

“But consent is the magic key to the left,” he added.

Consent, of course, is one of the fundamental elements of sexual interactions among human beings, particularly in instances where participating parties wish to honor the personal autonomy of fellow humans.

Limbaugh went on to defend Trump, who faces a growing list of women who’ve alleged that he made unwanted sexual advances, including a People magazine reporter who said Trump kissed her without her consent while his pregnant wife Melania was upstairs at their Mar-a-Lago estate. The onslaught of allegations comes after a 2005 recording revealed Trump’s vile sense of entitlement over women’s bodies.

Limbaugh has his own tricky relationship with the whole concept of consent. In 2014, the radio host — who somehow still has a radio show — gave this gem of a lecture on when “no” means “yes” (hint, never):

“How many of you guys in your own experience with women have learned that no means yes, if you know how to spot it? Let me tell you something, in this modern world, that is simply… that’s not tolerated. People aren’t even going to try to understand that one. It used to be that it was a cliché. It used to be part of the advice young boys were given.”

A modern world that values everyone’s right to choose who they do or don't have sex with is apparently not one that Limbaugh cares to live in.