Report: Donald Trump may have lied about giving money to 9/11 charities

A probe into the GOP candidate's giving history shows that, when it comes to giving money, he's all talk, no action 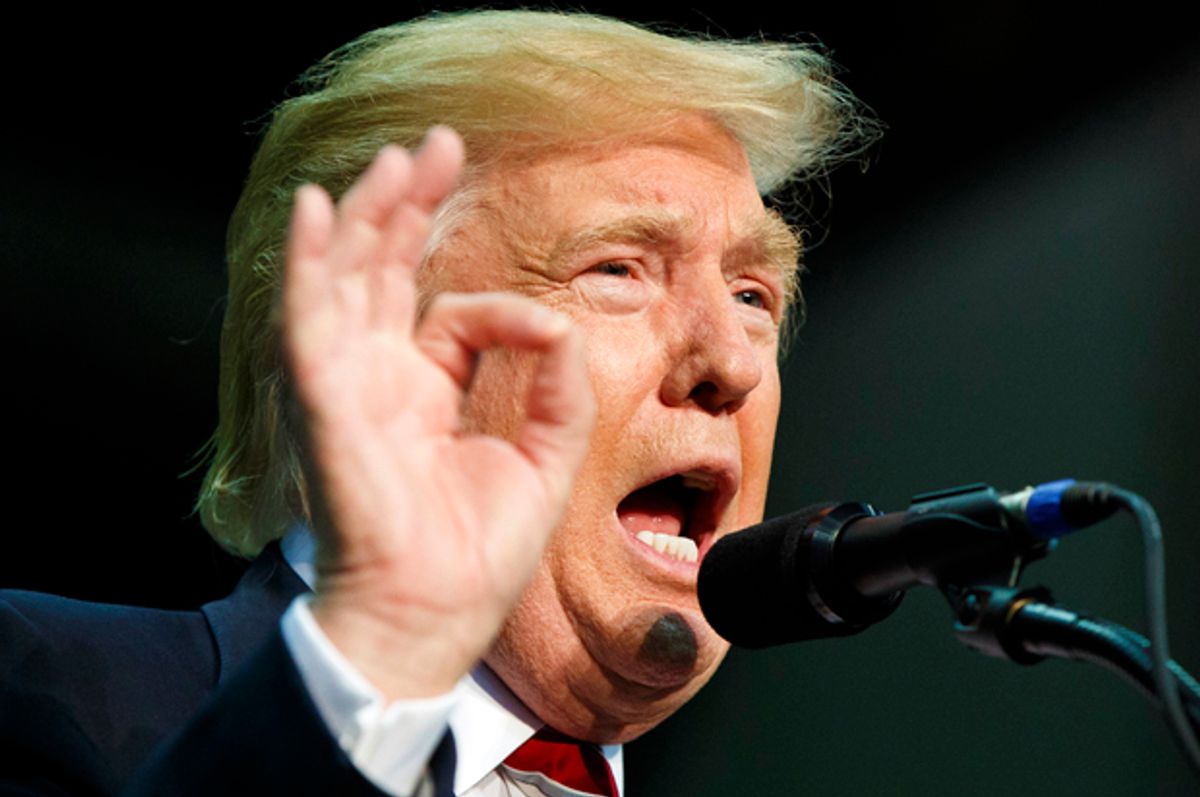 On September 11, 2001, hours after terrorists piloted hijacked jets into the World Trade Center’s twin towers, Donald Trump distastefully said of his own financial district building, “now it's the tallest.” Since then, the businessman with a penchant for controversy has made claims of seeing Muslims on rooftops in New Jersey dancing in celebration and donating a small portion of his wealth to assist the recovery effort. While Trump’s anti-Muslim claims were long ago debunked, his boasts of his charity in the aftermath of tragedy have recently come under increased scrutiny.

The New York City Comptroller’s Office announced on Friday that it found no evidence that Trump donated to two 9/11 charities in the year after the attacks.

Weeks after the 9/11 attacks, Trump appeared on Howard Stern’s radio show and promised to contribute to Stern’s charity effort for survivors of the attack, first responders, and their families. According to New York City Comptroller Scott Stringer, despite Trump’s 2001 on-air promise that he would donate $10,000 to the Twin Towers Fund, records show that through mid-2002 neither Trump personally nor the Trump Foundation donated to the group. From ABC News:

At the request of multiple news organizations, including the New York Daily News, which first reported the story, Stringer's office conducted a review of previously sealed records of the Twin Towers Fund and the New York City Public/Private Initiatives Inc., doing business as the Twin Towers Fund, which were set up in the aftermath of the 9/11 attacks to raise money to support victims’ families, first responders and first responders’ families.

The New York City Comptroller's Office confirmed to ABC News that it had manually reviewed about 1,500 pages of donor records, containing the names of more than 110,000 individuals and entities that were collected as part of the audits. The audit of the Twin Towers Fund covered the period from Sept. 12, 2001 to Aug. 31, 2002, while the audit of the New York City Public/Private Initiatives Inc., doing business as the Twin Towers Fund, covered the period Sept. 12, 2001 to June 30, 2002.

“My office has reviewed the donations made in the nearly 12 months following the attacks – and we didn’t find evidence that he contributed a single cent to the victims, our first responders, and to our city through the Twin Towers Fund,” Stringer said in a statement to ABC News.

A December 2003 report detailing the “unprecedented outpouring of charitable support” following the 9/11 attacks, The Foundation Center noted that nearly 1,300 foundations, corporations and other institutional donors gave a total of $1.1 billion for recovery and relief efforts. “The sweeping breadth of the response has proven a milestone for philanthropy,” the report declared. But the Daily News combed through the Trump Foundation’s tax records from 2001 and 2014 and found no 9/11 related donations, aside from a $1,000 donation in 2006 to the New York Rescue Workers Detoxification Fund.

In a 2015 statement from the Trump campaign, Hope Hicks told the Daily Mail: “Mr. Trump has donated close to half a million dollars to organizations as a result of the 9/11 tragedy including the American Red Cross and the Marine Corps Law Enforcement Fund. In addition to a total of $102 million dollars donated to hundreds of charitable foundations over a relatively short period of time, many of which helped people affected by 9/11.”

Listen to Trump’s apparently false claim that he did donate to Stern's charity below. Remarks begin at 1:53: