Rise of the sane and angry woman: “Girl on the Train” is the 2016 rejoinder to “Fatal Attraction”

For decades, female rage has scared the hell out of Hollywood. Finally, a film that sides with female rage 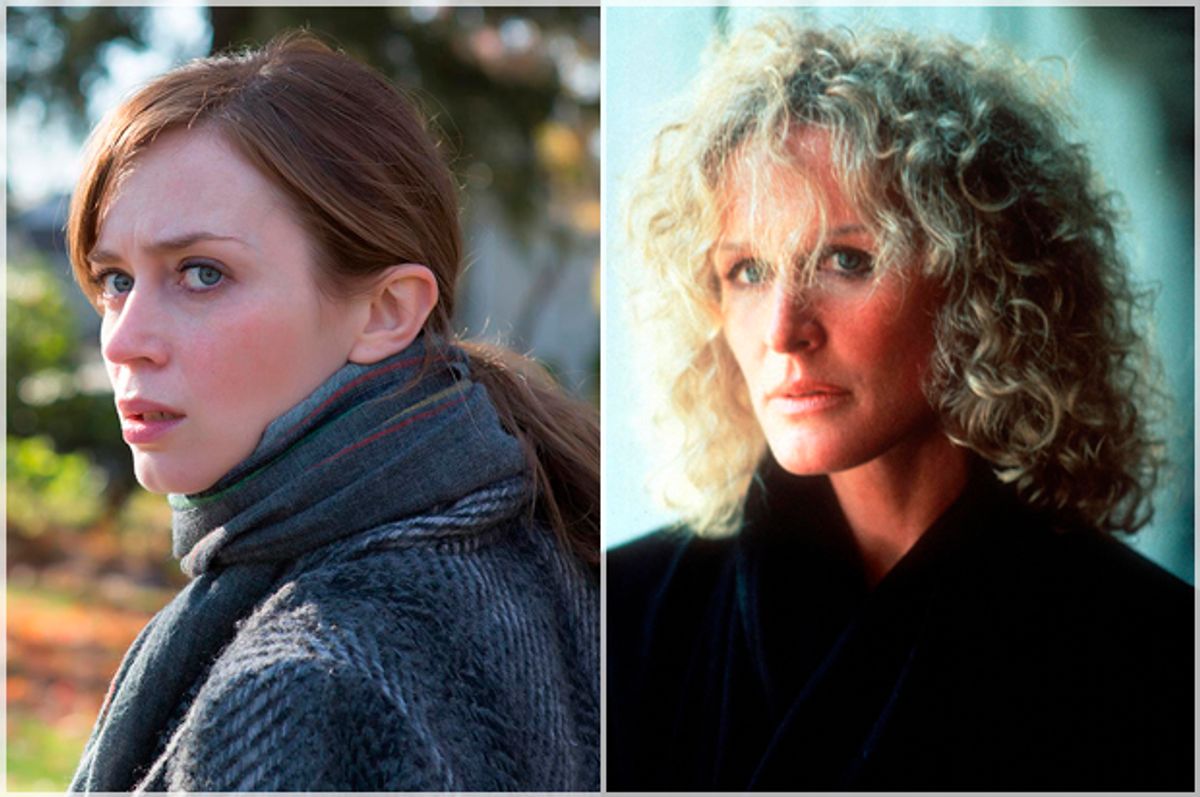 Emily Blunt in "The Girl on the Train;" Glenn Close in "Fatal Attraction"
--

Amid the white tiles of Grand Central’s cavernous ladies room unfolds one of the most captivating, if indulgent, meltdowns in recent cinema history. “I didn’t have words to describe what I felt that day,” explains Rachel Watson (Emily Blunt) to her gal pal following a series of dirty martinis. “But seeing that woman kissing a man who was not her husband, I realize now it was pure rage.” After supplying a graphic fantasy of “bashing that woman’s head in,” she proceeds to smear lipstick across the mirror with her hands, a sordid crimson blur that approaches amateur action painting.

Angry women are having a moment and it isn’t always pretty. The sluggish mainstream, not surprisingly, is ham-fistedly sorting it out.

Obsessive, volatile, manipulative — we’ve seen it all before. We’ve seen it so many times before that the conflation of female ire and insanity can seem just about inevitable: Rebecca De Mornay of “Hand that Rocks the Cradle” (1992); Rosamund Pike of “Gone Girl” (2014); Jennifer Jason Leigh in “Single White Female” (1992); and of course Glenn Close of the iconic 1987 “Fatal Attraction” — pissed-off women have for decades scared the hell out of Hollywood, their villainy becoming borderline blasé.

Whereas righteous wrath and a thirst for vengeance among men have spawned a surfeit of subgenres (from “Dirty Harry” to “Die Hard,” from “Taken” to “The Revenant”), when women take issue with life’s injustices and then express the audacity to openly show it, they are almost invariably dubbed unhinged, imbalanced, desperate for attention, exhibitionist, mad, or some toxically spicy mélange therein.

“The Girl on the Train” pockets these traits like soon-to-be flattened pennies. For all its plot holes and too-slick scripting, Tate Taylor’s adaptation of Paula Hawkins’s 2015 page-turner is but the latest incarnation of female rage — redeemable insofar as this time our heroine is absolved of the “crazy” tag by the end. [Note: Spoilers ahead.]

“You and I both know what you’re capable of,” snarls Tom (Justin Theroux), Rachel’s ex who has gaslighted her into taking the blame for no small number of public outbursts and acts of petty violence. Remove the alcoholic blackouts and obsessive train trips, and Rachel’s rage initially seems a justifiable, even typical, response to her husband’s affair with Anna (Rebecca Ferguson), a real estate agent with Botticelli hair. When Tom swaps Rachel for Anna as queen of Westchester, siring infant Evie but a year later, such rancor becomes even more understandable given the protagonist’s battle with infertility.

But predictably, Rachel’s righteous anger soon spirals into lunacy — redirected at Megan (Haley Bennett), Anna’s sultry doppelgänger a few doors down. Fixating on both blondes from a train she pretends to take to work each day, Rachel spots Megan on her balcony breaking from her daily routine of posing like a listless lingerie model to canoodle with a man who is not her husband. For “a preposterous movie but not an unenjoyable one,” as put by The New York Times’ Manohla Dargis, it’s apropos that most of this action takes place on a street called “Beckett.” Much of the plot is pretty absurd.

Flash back 29 years, and Adrian Lyne’s thriller “Fatal Attraction” feels cinema verité by comparison, but what the two share in common is worth examining, not only for how they orbit female obsession but also how they vilify (or validate) female wrath. “I’m not going to be ignored, Dan!” declares Alex Forrest (Glenn Close) to her one-weekend stand, a twerpy Michael Douglas who gets her pregnant and then won’t return her calls. “What responsibilities?!” he rages in her loft after insisting that she obtain an abortion and then quietly leave his life. “Go ahead; hit me,” she says. “If you can’t fuck me, why don’t you just hit me?”

Decades later, men are still passing the buck when it comes to being accountable — for rape, corporate crime or uncreative “locker talk.” Meanwhile women seem overreactive killjoys if they stand up to it. “You’re so sad. You know that, Alex? Lonely and very sad,” Dan replies, before slamming her against a stairwell and threatening to kill her if she tells his wife. Of course, his threat and violence come across as logical in these circumstances. Alex’s fury? Clearly bonkers.

In “The Girl on the Train,” Rachel forfeits her mind under the influence of alcohol and a narcissistic, controlling husband — one not that different from Dan, in that nothing is ever his fault. It turns out that he's the man Megan is having an affair with. “Get rid of it!” Tom barks at Megan at the news that she might be carrying his child. When he mocks her potential mothering skills, she seethes back, “Without us, you’re just a pathetic, impotent man,” she says of all the women he bangs. Apparently incensed at this accusation, Tom throws her down on the ground in the woods, a stone splitting the back of her head. “You can’t get rid of me!” she screams right before he does just that.

That Tom — the attractive white-collar white guy — turns out to be the actual crazy, malicious one feels a twinge redemptive. Unlike Alex, Rachel regains her mind, goes after Tom and bunnies romp on unboiled. In perhaps the bougie-est twist of fate all year (literally!), her weapon of choice turns out to be a handheld wine key filched mid-fight. Once Rachel impales Tom’s jugular in their vast backyard, Anna slowly approaches, kneels by his side, then turns the screw even deeper. It’s gory; it’s vulgar. It’s (suburban) Sisters Doing It For Themselves.

United in their Williams-Sonoma slaughter, the pair’s sudden vigilantism against Tom feels pretty ludicrous but also vaguely gratifying — especially compared to the brutal wife-versus-lover showdown in“Fatal Attraction,” wherein the crazy-angry woman is killed off in a bathtub.

“I never thought of her as a villain,” explained Close in a 2010 reunion interview with Oprah and Douglas. “I always thought she was a human being in a lot of pain and she needed help.”

In the original ending of the movie, Alex isn’t killed by Dan’s wife; she slits her own neck to “Madame Butterfly” arias. “There is nothing for me, Dan,” she says on a recorded suicide cassette conveniently left behind.

A whole six months after the film was wrapped up, a new ending was shot based on poor reviews of the first. “When I heard that they wanted to make me a psychopath, rather than someone who has problems with her life, I had a profound problem with it,” Close said. And yet, evidently, it’s what the audience wanted. “You were so good in the part that everyone wanted you to be killed. They viscerally wanted someone to put their hands around your throat,” Douglas explained, as though death were a decoy Oscar.

In 1987, the idea that Alex could be raging and rational just wouldn’t have filled the seats. But maybe things are changing. Whether it be Beyoncé’s unapologetic takedown of infidelity and patriarchal arrogance in “Lemonade,” the searing letter from Brock Turner's victim or the millions of citizens (across genders) declaring “I’m with Her,” 2016 hasn’t been Year of the Woman so much as Year of the Sane and Angry One.

“I’m not the girl I used to be. It’s as if people can see it on my face,” confesses Rachel early in the film (to wit: Blunt’s eyes, when bloodshot, look even more Tiffany blue). Call it hackneyed, trashy or convoluted, but “The Girl on the Train” ultimately offers a welcome dose of female indignation at a time where the arrogance of powerful men proves more public — and pathological — than ever.