Fifty shades of Donald Trump: Republicans say no — and come crawling back! Journalists swoon! But the lonely hero's a big nothing

Trump has seduced the media, and grabbed the Republican Party by the you-know-what. But this is not a love story 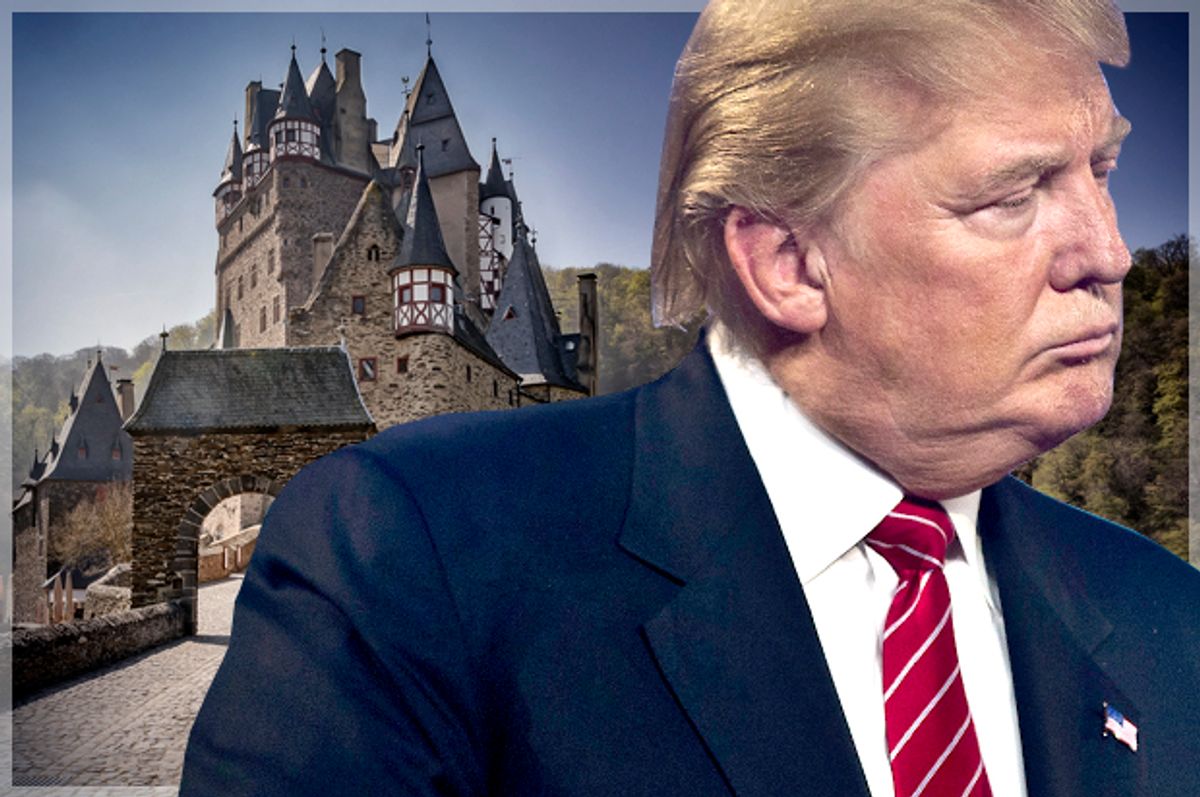 Honestly, I should be writing this weekend about the war that’s currently being waged for the soul of American men — a war over American manhood, if I can get away with such an outdated phrase. My Salon colleague Amanda Marcotte published an electrifying essay on Thursday with the title “Are women people?”, which sounds like a facetious question but in the context of the dark forces driving Donald Trump’s campaign apparently isn’t. I would turn the question around: Are men people?

Because the issue of sexual assault, and the issue of what kind of society we want to have and how we conceive relationships between men and women — those are not “women’s issues.” It is men who commit sexual assault (roughly 99 percent of the time) and it is the silence of other men — or their covert and overt encouragement, as in the case of TV nonentity Billy Bush — that enables it. “How in the world did we get here?”, as CBS News veteran Bob Schieffer asked aloud during his memorable tirade after last Sunday’s so-called town-hall debate between Trump and Hillary Clinton. (“Town-hall” being apparently a euphemism for “goat-fuck.”) Schieffer didn’t even know how bad the ensuing week would get, although he could probably smell it coming. How did we get to a place where one of our two major political parties has nominated a guy who boasts about touching women’s vaginas without their permission — and where he isn’t being ridden out of town on a rail, and where millions and millions of adult citizens, literate enough to sign their names and sober enough to find their polling places on Election Day, are going to vote for him?

I mean, look — as regular readers may be aware, I pride myself on my cynical detachment and my Yeats-epitaph attitude to transitory phenomena like who’s going to be elected president. We’re all grains of sand on the great beach of time, and given the unknowable expanses of the universe, none of it really matters. But this time around — Jesus fucking Christ on a fucking bicycle. I’m having a Bob Schieffer moment, if Schieffer were being played by Dennis Hopper in a never-completed David Lynch film made just after “Blue Velvet.” I’m a little uneasy with Hillary Clinton’s argument that she had disagreements with previous Republican nominees but at least they were vaguely normal people (among other things, it assumes that she is a vaguely normal person), but effectively she’s right. She and Barack Obama and Mitt Romney and John McCain are sands upon the Red Sea shore and all that; which of them got elected was important in the moment but not in the eyes of God. But Donald Trump is not a grain of sand. He is a giant slug from the seventh moon of Neptune who ate all the sand, drank the Red Sea and then swallowed God.

I wish I believed in a literal hell, because I want there to be a special place in it for all the people who made Donald Trump possible, especially all the cowardly, pants-shitting Republicans who insist they don’t really like him but kind of think he’s, like, sooooo sexy? Just when you thought the whole spectacle couldn’t get more craven and more hypocritical, it did: Many of the Republicans who made a big show of righteous rejection after Trump’s “Access Hollywood” tape was revealed came crawling back after it became clear that their voter base still liked him. So we got a series of people telling the audiences of Podunk right-wing radio shows that, yeah, perhaps they had said in a heated moment that Trump was a shameful person who should withdraw as their party's nominee — but that didn’t mean they weren’t going to vote for him!

To be honest, it all suggests an abusive relationship, and I’m not trying to be funny. The Republican Party is like that girl in “Fifty Shades of Grey,” who tells herself she is totally not into being the bottom in an intense BDSM relationship but keeps coming back for more, because the dude is super-handsome and super-rich, and one day he’s gonna love her for real. Tastes vary, admittedly, but the TrumpSlug is not all that handsome, and evidently not as rich as he pretends to be. His degree of love for “I can’t commit” manic-pixie-dreamgirl Paul Ryan and the rest of the party Ryan hilariously claims to lead? Not really all that much!

There’s a psychological relationship, hovering just beyond my grasp, that connects the way Donald Trump’s campaign is trying to normalize sexual assault and the objectification of women with the internal turmoil of the American conservative mind. Republicans at least halfway want to be abused and dominated by Trump; they know they’ve been evil hypocrites who misled their own voters, and they deserve it.

To put it another way, Donald Trump has grabbed the Republican Party by the pussy, and it is not-so-secretly thrilled. So it stands to reason, in the addled GOP hive-mind, that if he did that to a dozen or two dozen — or, who knows, a hundred? — real women in the real world, they must have liked it too.

Another circle of my imaginary hell would be reserved for journalists who can’t help obeying a version of the same impulse and trying to cast TrumpSlug as a tragic or romantic hero. This is at least version 2.x of the media love affair with Trump, following the portrayal of him as a master showman who is no threat to democracy because he doesn’t mean anything he says, epitomized in an odious Hollywood Reporter interview in June by Michael Wolff. As Janet Malcolm of the New Yorker observed many years ago, once journalists get hold of a narrative — Cinderella is good, and the stepsisters are bad — they never let go of it. In this case, the narrative is simply that Donald Trump is so fascinating.

In this more recent and even more offensive media narrative, Trump is a misunderstood and unloved figure, quite literally alone in his tower. (Not a beetling ruin overlooking Dartmoor, in this case, but a smoked-glass monstrosity overlooking the Harry Winston store on Fifth Avenue.) He’s like Mr. Darcy or Mr. Rochester or the Beast from “Beauty and the Beast,” except bright orange and with no dancing teapot. His wife is not literally locked in the attic, although events are trending in that direction.

No one excels in this genre, unsurprisingly, more than New York Times columnist David Brooks, who wrote last week about “the essential loneliness of Donald Trump.” I’m not kidding. As Brooks reluctantly admits, Trump is an “appalling” person whose campaign “sinks to new low after new low.” Yet the compassionate conservative’s response, I guess, is to experience “feelings of deep sadness and pity.”

Imagine if you had to go through a single day without sharing kind little moments with strangers and friends.

Imagine if you had to endure a single week in a hate-filled world, crowded with enemies of your own making, the object of disgust and derision.

You would be a twisted, tortured shrivel, too, and maybe you’d lash out and try to take cruel revenge on the universe. For Trump this is his whole life.

Yeah, imagine. I can hardly handle the pain. Now imagine you were a young woman who was casually assaulted by a famous rich man and carried that around in your mind and body for years afterwards, too ashamed to talk about it and not sure how to feel about it. Where is David Brooks’ deep sadness and pity for that woman? Imagine you’re some guy who runs a family contracting business in South Jersey, who felt great because you got work from a legendary billionaire who was supposedly revitalizing your state and then went bankrupt because he wouldn’t pay you. Where is David Brooks when those people are alone in the middle of the night, taking too many pills or suffering from insomnia and despair? Is he reading their tweets in a spirit of compassion and anguish?

As political analysis goes, that’s up there with “You know, Hitler really loved his dogs.” Given what followed in the week since Brooks wrote that column, he may wish he could expunge it from the Times archive. Reporter Maggie Haberman may feel similarly about the “Samson Agonistes”-style portrait of Trump she published two days earlier, in which Trump Tower is described as a “lonely fortress” where the Republican nominee lurks, “increasingly isolated and upset.” Donald Trump is upset? Oh, the humanity. As I said earlier: Jesus Christ on a bike. Was the nature of this man and his campaign not known to you people? Was the urge to narrativize — to make up a story that has a hero and a villain and the possibility of redemption, whether or not it was true — more important than Trump’s actions or words, and their effects in the real world?

There’s no need to answer that question, because in the coverage of Donald Trump over the last year it answers itself. And there’s no need to revisit the pseudo-profound op-ed Garrison Keillor wrote for the Washington Post in August, depicting Trump as a pathetic outer-borough yokel who yearns for the respect of Manhattan’s Jewish elite and wants to tell his middle American fans “one true thing”: “I love you to death and when this is over I will have nothing that I want.”

There is of course absolutely no evidence that Trump loves anyone or anything, or is capable of that kind of reflection. More to the point, the big fallacy behind all this compulsive storytelling is that because Trump has channeled an unprecedented political phenomenon he must also be an interesting person, worthy of being the hero or antihero of some compelling tale. He couldn’t possibly be a shrewd and vulgar huckster who has held up a dollar-store mirror to society’s worst impulses, or a vain and small-minded man who has hurt many people whose stories are far more worth telling than his.