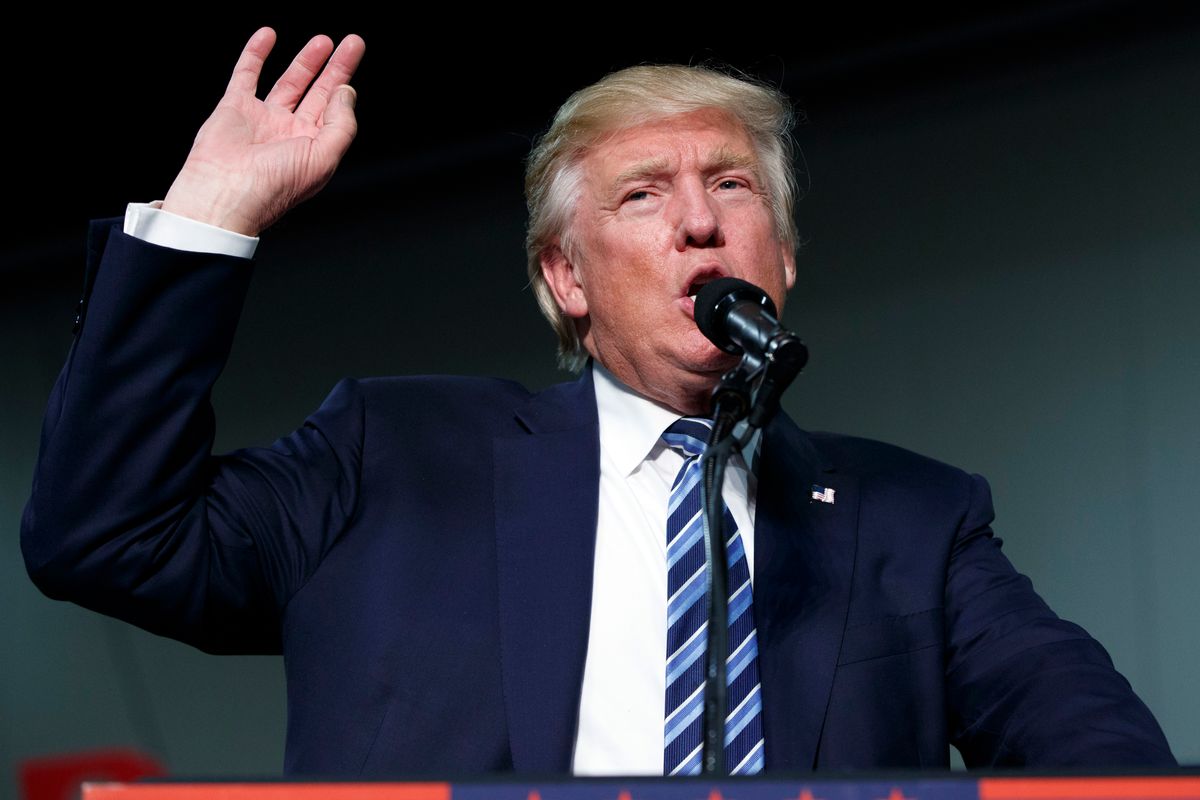 CHARLOTTE, N.C. -- Donald Trump wanted this city to know that women and Jesus love him. Facing allegations of decidedly un-Christian sexual assault from a growing number of women, the Republican presidential nominee rolled into Mecklenburg County on Friday night and put on a show of female and religious support.

Before Trump came out on the stage, he was hyped up by televangelist James Robison, who sought to absolve Trump of any alleged wrongdoing via a hefty, godly dose of moral relativism. “Anything this man is accused of,” Robison said, presumably referring to Trump’s alleged acts of sexual aggression, “pales in comparison” to the “atrocities” committed by the liberals running the government.

After Robison came the “Women for Trump,” a group of pink-uniformed Trump surrogates and employees (and his daughter-in-law Lara Lee Trump) who, by their very presence, conferred upon Trump the moral and political support of women everywhere. As the Women for Trump spoke in praise of the alleged sexual assaulter who pays their salaries, the crowd enthusiastically waved “Women for Trump” signs that seemed to have been printed up for the occasion.

Then it was Trump’s turn to bring a bit more edge to his own defense. “I am the victim of the one of the great smear campaigns in the history of our country,” Trump said as the audience offered a chorus of sympathetic boos. The whole sexual-assault affair was organized by Hillary Clinton, Trump argued, who runs a “corrupt, criminal syndicate” and whose “specialty, if you look over the years, has been character assassination.” He once again insisted that all the allegations are “made up,” and impugned the motives of his accusers. “When you’ve met tens of thousands of people as I have,” Trump said, “it’s not hard to find a small handful of people willing to make false smears for personal fame, who knows, maybe for financial reasons.”

It’s all grossly self-serving and morally bankrupt. And it’s also exactly what Trump’s supporters are eager to hear. The people I talked to at Trump’s rally were clearly looking for a way to get past Trump’s misogyny, either by treating Trump’s word as the untarnished truth, or by some motivated rationalization. “I hate to hear the comment that he made, it is derogatory to women,” said dental consultant Karen Powell, referring to the "Access Hollywood" tape released a week earlier. But, she added, “I think men in his position are likely to make statements like that. I don’t think he’s any worse than any other president, in that regard, to women.”

I asked Tricia Johnson, a retired paralegal from Charlotte, about Trump’s increasingly ugly responses to the women accusing him of assault, and she said Trump “should be ignoring the bimbos” and focusing on issues instead. When I asked if the allegations against Trump had given her any pause, she said no. “Not one bit,” she said, “because I know the alternative: Hillary Clinton. And I don’t care what Trump has done, she’s done worse.”

There also seems to be general agreement among Trump supporters that the larger story behind the accusations against Trump is their timing and the obvious (to them) involvement of the Clintons. “It makes me mad because it came out right before the WikiLeaks on Clinton,” said Barbara Mahone, a retiree who drove to Charlotte from Tennessee. “Right before that, all these things came out about Donald which aren’t true, or not substantiated yet.”

Patricia, a housewife from Huntersville, North Carolina, whom I spoke to following Trump’s remarks, also argued that an anti-Trump conspiracy was afoot. “Hillary, all the way -- her and Obama, they’re the ones who’s putting it out there.” When I asked her what she thought about the actual allegations against the Republican nominee, she deferred to Trump. “I don’t believe it,” she said. “I trust him.”