The oyster is your world: The little aphrodisiac that could save our shores, clean our waters and much more 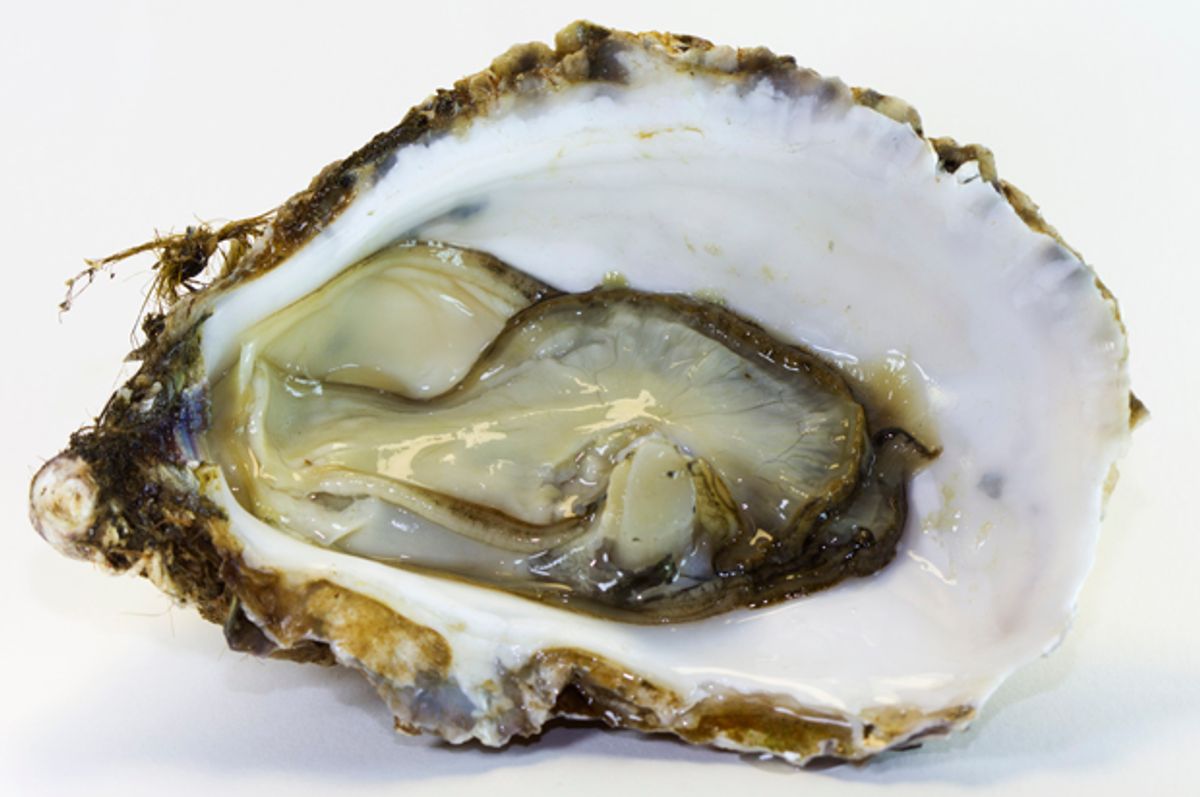 Yes, they're a staple of raw bars and a proven aphrodisiac, but oysters serve a far greater purpose than simply satiating appetites and boosting libidos: they create reefs that are essential to protecting our waters and our shorelines. Yet these natural structures are close to extinction, and the race to bring back the wild oyster bed is on.

Oysters aren't fragile — they've been around for 200 million years, first feeding prehistoric marine lizards and, eventually, the original Homo sapiens. In fact, our early ancestors likely wouldn't have survived if it weren't for sustenance provided by the humble oyster.

Today, this peasant-food-turned-haute-cuisine is more popular than ever — Americans put back 2.5 billion oysters per year. But these omega-3 and vitamin-rich mollusks do more than feed us — their reefs dampen wave energy by as much as 93 percent, protecting our infrastructure from storm surges and rising seas. They also serve as habitat for other species and are, therefore, an essential part of the marine ecosystem. When they eat, each oyster can purify up to 50 gallons of water per day by filtering out pollutants, like nitrogen from fertilizer runoff, which contribute to oceanic dead zones and cause major economic damage to the fishing industry.

In other words, if all oysters disappeared from the face of the earth tomorrow, “there would be a great sigh and moan throughout the universe," John Supan, PhD, director of Louisiana State University’s Oyster Research Lab, told Salon.

A 2011 study published in the journal BioScience suggests the extinction of oyster reefs could be imminent — researchers discovered these beds are the most damaged of any marine habitat in the world. More than 85 percent have been wiped out by overharvesting, disease and climate change-induced acidification. Compare that with the 20 percent of coral reefs we’ve lost globally.

This doesn’t mean oysters are off the menu. In fact, 95 percent of the oysters we consume are not the product of wild reefs, but of aquaculture. This type of farming, often involving remote hatcheries, has existed for hundreds of years, and will continue even if all wild reefs are decimated. What would be lost are the environmental, ecological and coastal defense benefits, which are all the more important with the threat of rising of sea levels.

So what’s being done to protect oyster beds?

Efforts picked up in 2009, as the passage of the American Recovery and Reinvestment Act, which allocated $170 million for restoration work that might create jobs in a post-recession economy, spurred a groundswell of action. America’s National Oceanic and Atmospheric Administration alone has now completed 587 shellfish restoration projects throughout the country.

In New York Harbor, where oysters are functionally extinct, the Billion Oyster Project is striving to restore one billion live oysters to 100 acres of the estuary, in hopes of cleaning the water, creating greater biodiversity and stabilizing the sea floor. In the Chesapeake Bay, where native oyster populations are at 1 percent of their previous abundance, the Army Corps of Engineers is working with nonprofits and other groups to restore reefs in 20 tributaries by 2025.

And, with funds provided by the RESTORE Act signed into law following the BP oil spill in 2010, several major projects are underway in the Gulf of Mexico, spearheaded by The Nature Conservancy and partners.

“I’m hoping to get to hundreds of miles of restored, vibrant reef across the Gulf,” Mike Beck, PhD, lead marine scientist for the Nature Conservancy and coauthor of the 2011 oyster reef study, told Salon. “If we can use the Gulf as an example, we can do it in China and in Europe. From RESTORE, there will be $5 billion spent into the Gulf over the course of the next decade, and we should build many reefs to defend coastlines. Oyster restoration is approximately $1.5 million per mile — that’s incredibly cheap.

At least, compared to the installation of artificial breakwaters, which are far costlier to build and require more maintenance. The Nature Conservancy estimates 100 miles of oyster reef could save property owners along the Gulf up to $150 million on bulkheads. What’s more, an investment of just $150 million has potential to increase annual seafood sales by $7.3 million annually, since oyster reefs allow so many marine species to thrive.

The process for creating a wild reef begins with selecting a site based on conditions, including salinity level and accessibility. Then mesh bags are filled with aged oyster shells, often recycled from local or citizen activists, and these bags are moved into the intertidal zone via boats, wheelbarrows or a human chain. If there are no oyster shells available, a different type of substrate — like whelk shells, concrete, or abandoned crab pots — is used. On this substrate, oyster larvae will attach, and reach market size within two years’ time.

In some cases, where free-swimming larvae are rare, these baby oysters (2 million fit into the palm a hand) are collected in wet coffee filters at a hatchery or university lab, before being shipped to the desired location in a refrigerator, which a small set of experts find troubling.

“You’re playing God,” Dennis Hedgecock, PhD, leading researcher in oyster aquaculture and genetics with the University of Southern California, told Salon. “This is a focus on the East Coast, but there needs to be more care and science than is sometimes employed, otherwise you’re potentially doing more harm than good. Transplanting larvae from a hatchery to the wild doesn’t solve the underlying problem: What reduced the natural population of a reef in the first place?”

Until we can solve that by overhauling regulations and slowing the tide of climate change, the burgeoning oyster farm industry will continue supplying fisheries, and taking pressure off newly established wild reefs so they can take hold before being harvested.

“All of the reefs we travel the world to see, all of those structures we think of as incredible, they used to exist in our own bays and estuaries,” Beck told Salon. “In the past, there used to be reefs three, four, five, up to nine feet tall. They’re majestic, and we can get them back.”

In the meantime, the public is wising up to one important pearl of wisdom: The world may not be our oyster, but the world needs oysters.