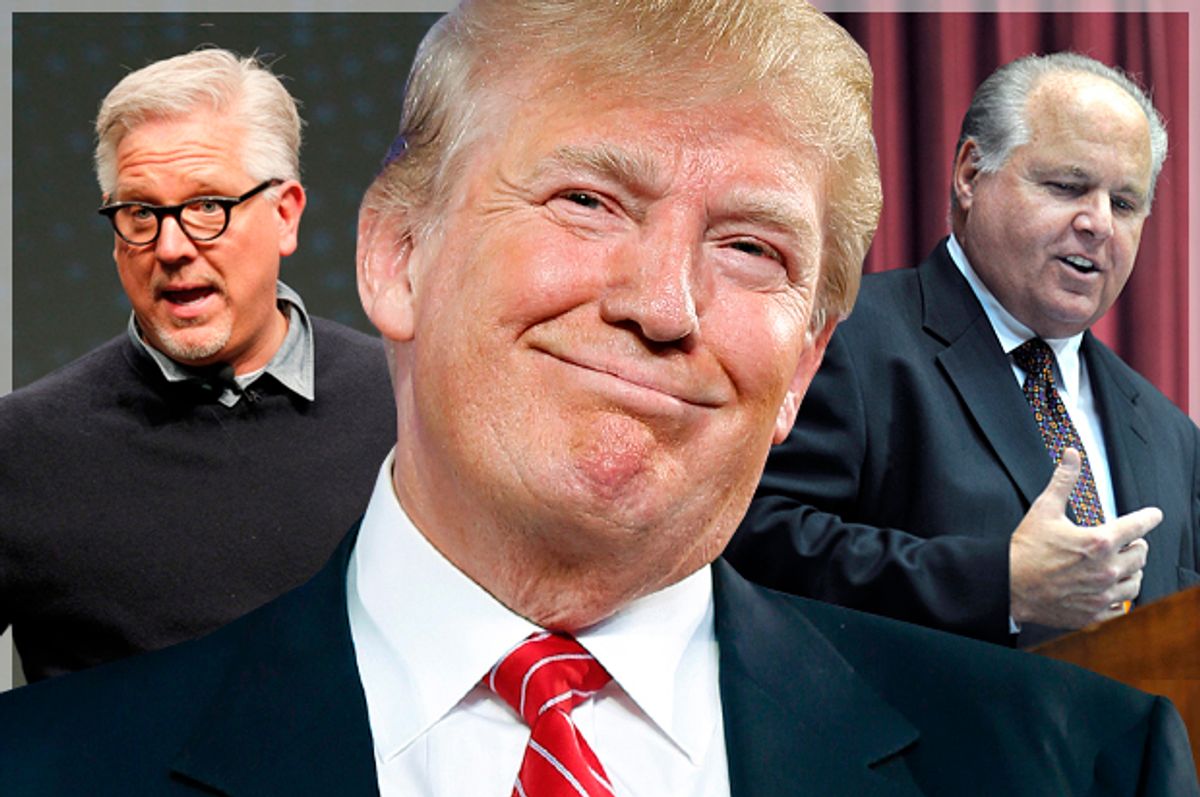 The conservative media needs an intervention. Glenn Beck told Vice this week that he doesn't think he helped create Donald Trump; rather Trump seized the moment that Beck helped build with his message and method: hate anyone in office who tries to compromise, cry "throw the bums out," default to an anti-establishment stance, erect barriers between Wall Street versus Main Street, and so on.

While Beck is truly a brilliant innovator and disruptive thinker, he is refusing to take responsibility for his role in paving the way for Trump’s ascent. In the Vice interview, he actually blamed Roger Ailes — the man who helped create Beck’s empire. Of course, Beck (or Ailes) isn't alone: Rush Limbaugh, Ann Coulter, Breitbart.com (Andrew Breitbart's successors are the culprits; he was more pragmatic and less dogmatic himself) and many other conservative media forces created the echo chamber that gave rise to Trump.

We need new ways to create conservative media as an antidote to this toxic echo chamber. As David French pointed out in National Review, the drive to become “Fox News Famous” is alluring, but it doesn’t win conservatism any converts. Until we conservatives see how polarized and culturally isolated the conservative media has been from the rest of the country, we will continue to be irrelevant and marginalized at the ballot box. (Case in point: The GOP has won the popular vote in just one of the past six presidential elections).

The demographics of America do not bode well for conservatives, and consumers of conservative messages reflect the leanings of an aging, white population. Yet 43 percent of millennials are nonwhite, and the majority of babies born today are nonwhite. It defies logic to think that a candidate whose people cavort with the alt-right — including Breitbart.com — could ever appeal to the future of America. Trump is polling at between 0 percent and 3 percent among black voters and less than 10 percent with Latino voters. The 2012 GOP autopsy was spot-on and has been shredded to bits with Trump.

The case for limiting immigration can be made with substantive and compelling arguments (especially those grounded in economics) that aren't overtly racist. But whatever moral ground Trump had, he conceded it when he rhetorically dehumanized and degraded immigrants. But his dehumanizing words sound similar to the book titles favored by Coulter, which describe liberals as demonic, brainless, treasonous  and more. It’s easy to see where Trump got his songbook. In a democracy, this approach is just bad politics, even if it can be a good business model for a couple decades.

Like any good conservative, I grew up listening to Rush Limbaugh and I'm very familiar with his rhetorical style and talents with his "Excellence in Broadcasting." But while I find many of his impressions, satires and observations side-splittingly hilarious and insightful, all too frequently his rants sound eerily like Trump's. Here are just a few:

“Women should not be allowed on juries where the accused is a stud.”
— Limbaugh in 1994

“Socks is the White House cat. But did you know there is also a White House dog?”
— Limbaugh, holding up a picture of a 13-year-old Chelsea Clinton, in 1993

“They’re out there protesting what they actually wish would happen to them sometimes.”
— Limbaugh on women protesting against sexual harassment, 2004

"I love the women’s movement — especially when walking behind it.”
— Limbaugh, 2010

“Female politicians get a pass on every aspect of their appearance. You would never have stories about how some female politican's fat. . . . There are plenty of lard-ass women in politics, and they get a total pass on it.” — Limbaugh, 2011

“So Ms. Fluke, and the rest of you Feminazis, here’s the deal. If we are going to pay for your contraceptives, and thus pay for you to have sex, we want something for it. We want you post the videos online so we can all watch.”
— Limbaugh, 2012

There are lots more at The Daily Beast — whose editor in chief is a former staffer for Trump adviser Rudy Giuliani and married to GOP strategist Margaret Hoover — and pretty much Google-able elsewhere. And the statements chosen here aren't just cherry picked; those themes are pretty common for him.

A favorite defense invoked by Limbaugh, Coulter and others is to laugh off any criticism, saying they are simply entertainers. If Limbaugh was so concerned about the coarsening of American culture and the degradation of America into a godless abyss (another of Limbaugh’s constant themes: attacking secular people), then I don't think he would be using language like this. If you want to argue that both Trump and Limbaugh are no worse than the lyrics of a rap song or perhaps a skit on SNL or Stephen Colbert or Jon Stewart, then we are in an arms race to the lowest common denominator.

The other problem is that in American culture, it's easy to punch up but hard to punch down. Women have been treated as second-class citizens in this country for two centuries: For much of that time we couldn't vote, work in most occupations, open a line of credit, serve on a jury, etc. That's why it is so culturally jarring when men attack women.

And if Limbaugh says, well, isn't that what they want — to be treated like men? Then my challenge to him is: Why can't you be the bigger person? Why can't you be the sort of gentleman that you claim was the paragon of virtue before the ’60s cultural unraveling? If our goal as reasonable conservatives is to find a healthy middle ground, e.g. not being ashamed to accept gender roles and/or stay-at-home motherhood while also allowing women equal opportunities (not equal outcomes), then why not use a style of humor that would win more women to his cause? Why alienate so many?

Also, on a pure voter turnout/effectiveness scale, another big difference is that conservative "entertainers" are not embraced by mainstream American culture. In fact, they are mocked by it. Colbert made an entire fake character to mock what Limbaugh sells. Stewart could have sent a small army to college with the money he made insulting Fox News. And Stewart and Colbert are beloved by Hollywood, by young people, by women, by people of color. See the breakout below from Pew on age demographics:

Now see this data from Columbia University on how people's political identity is primarily formed in early life. As a political investor, my ROI would be much stronger with Colbert et al, not Hannity or Limbaugh. 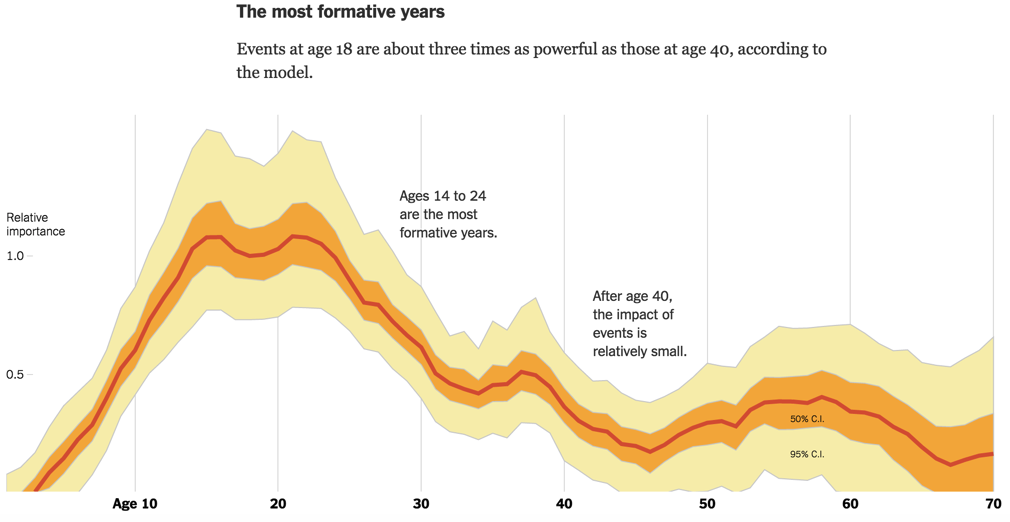 The structure of Limbaugh's show doesn't allow for response or engaging in a marketplace of ideas with young people. He laughs at young people instead of with them. Bill Maher, almost the same age as Limbaugh, at least will have conservative or libertarian millennials on his show and treats them decently. It's not that conservatism can't attract young people. It did during the presidency of Ronald Reagan. Why not Limbaugh?

There's no doubt that the media influences behavior; mounds of academic literature display this. So why can’t conservative media makers create products that appeal to young people, women and people of color? As Trump’s impending loss approaches, they don’t appear to have any choice if they want to hang on to any shred of relevance.