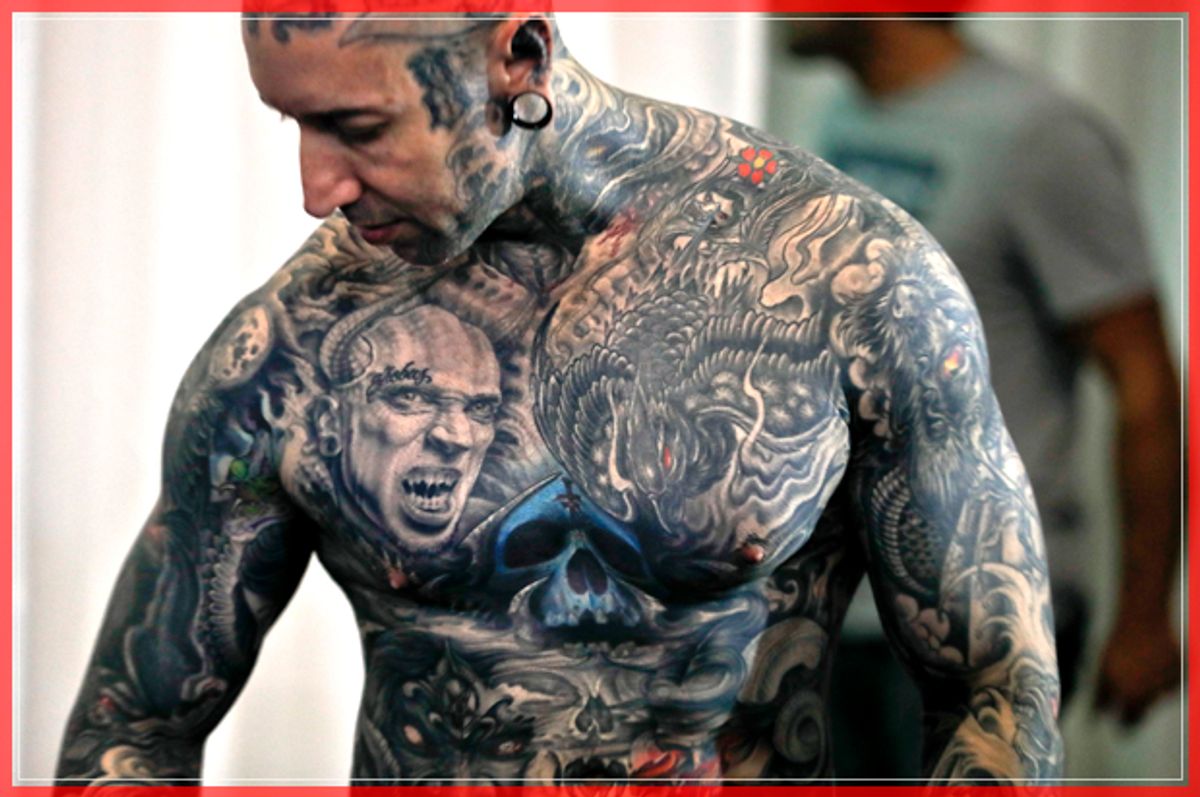 A man shows his tattoos during the International Tattoo Convention Bucharest 2016 in Bucharest, Romania, Sunday, Oct. 16, 2016. Prominent tattoo artists from across the world displayed their skills in the Romanian capital over the weekend. (AP Photo/Vadim Ghirda) (AP)
-- For my second tattoo, I wanted a dollar sign — to be irreverent. But then for reasons I don't remember, I switched from a dollar sign to a Japanese yen symbol. Asked, I'll tell people I'm doubly making fun of lames who get dollar sign and Chinese symbol tattoos. It's a very long way to go to explain it in any reasonable social situation. An air tour of Pyongyang, North Korea is such an ingenious form of propaganda that I'm surprised the Kim regime is so late in adopting it. A bird's eye view of the city enables tourists and apparatchiks to marvel at Pyongyang's manufactured urban splendor while keeping them so distant that they're in no danger of noticing the Potemkin-like nature of much of what they're seeing. (The skyline-dominating pyramid of the Ryugyong Hotel, which juts up in the background of this photo, stands empty after nearly three decades under construction.) The city itself is a work of propaganda meant to flaunt North Korea's supposed modernity and prosperity, but the ruse only works if no one can get too close.

St. Andrews, Scotland   Jeff J Mitchell/Getty
Students from St. Andrew's University cover themselves in foam during the 'raisin weekend', where raisins (now foam) is traditionally given to elder students as appreciation for their guidance Maybe you don't understand why it's called "Raisin Day" or what a tradition involving foam has to do with Scottish university students. Doesn't matter. Just take a moment to appreciate that the human capacity for joy and play and silliness remains durable. Enjoy the sight of people smiling. Smile too.

Madrid, Spain   Francisco Seco/AP
A dog rests in the arms of his owner at a dogathon I’m convinced gazing at a sleeping dog’s face could melt even the coldest of hearts. Charly, who marched in Madrid’s Dogathon to raise awareness for animal cruelty and adoption, looks peaceful as ever. He can rest knowing he’s fighting for a worthy cause.