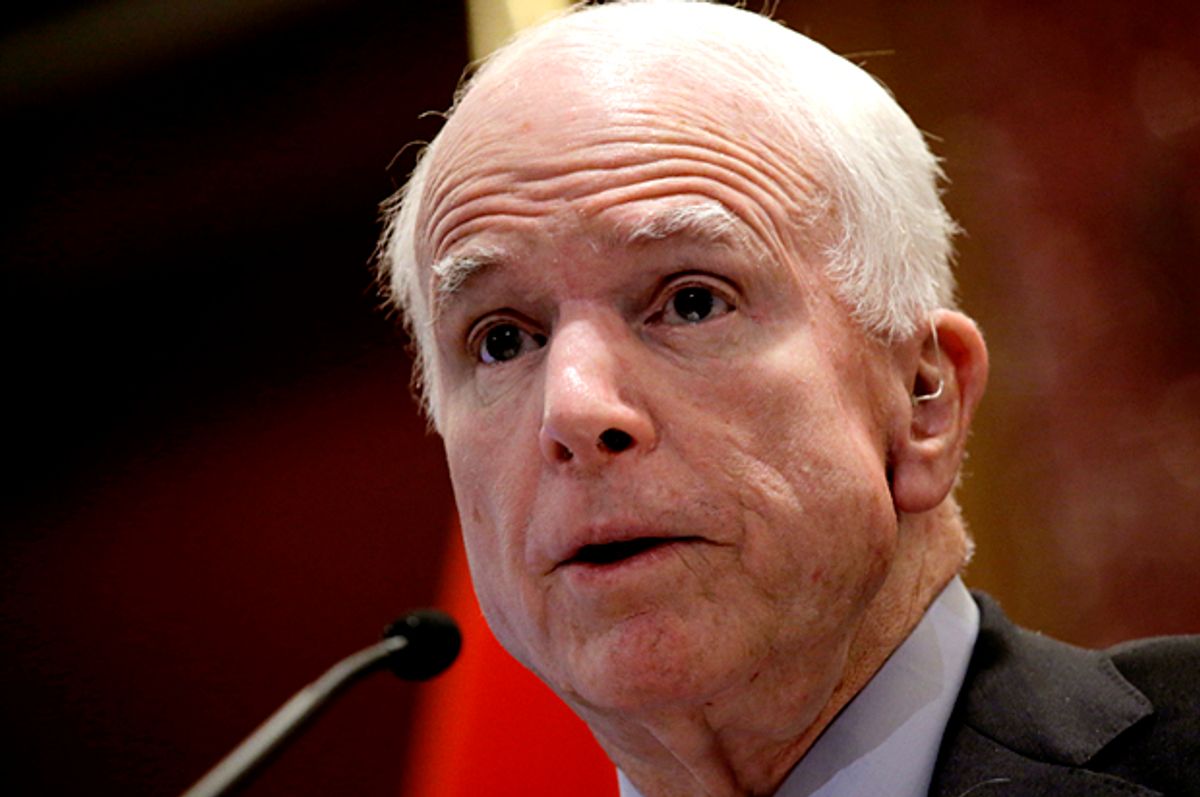 Just ten days ago Sen. John McCain found a principle worth defending. The poor guy must have had nothing but sleepless nights since, because on Monday he went back to being a principle-free member of the Republican wrecking crew that has spent the past few years smashing every norm that used to allow our government to function.

[T]here are no excuses for Donald Trump’s offensive and demeaning comments in the just released video; no woman should ever be victimized by this kind of inappropriate behavior. […]

Donald Trump’s behavior this week, concluding with the disclosure of his demeaning comments about women and his boasts about sexual assaults, make it impossible to continue to offer even conditional support for his candidacy.

And here is McCain on Monday being interviewed by a Philadelphia talk-radio host while campaigning for Pennsylvania’s Sen. Pat Toomey, who is locked in a tight re-election battle:

I promise you that we will be united against any Supreme Court nominee that Hillary Clinton, if she were president, would put up. I promise you. This is where we need the majority and Pat Toomey is probably as articulate and effective on the floor of the Senate as anyone I have encountered.

Recall that in the wake of Antonin Scalia’s death last February, Republican after Republican vowed to not even consider any nominee President Obama offered to replace him. Party members invented a new precedent, that Supreme Court vacancies never get filled in an election year, in order to proclaim that the American people should get a say by electing the president they want to see pick the next justice for the nation’s highest court.

Among the senators making this argument, of course, was John McCain.

But now that a Hillary Clinton victory looks likely, McCain, to the utter of surprise of literally no sentient human on Earth, has dropped the pretense that opposition to an Obama nominee was some sort of principled enfranchisement of American voters.

A great deal has been written this election cycle about all the ways in which a Trump presidency threatens democratic norms in our political system and why that means he needs to be not just beaten but crushed like a beer can in the election. But McCain’s comments are a reminder that the problem is not just a GOP base that saw fit to nominate this xenophobic, know-nothing circus peanut for the presidency.

No, the problem lies with Republican Party leaders who were smashing those norms when Trump was still firing people on “The Apprentice.” It lies with senators like McCain who have spent years promising voters rollbacks of Obama programs that they could never, ever deliver, and that they knew they could not deliver but promised anyway to keep the base voting for them.

McCain has been in the Senate for 30 years. He is more than aware of both the written and unwritten norms that allow the chamber to function. Or allowed it to function, back before Barack Obama won the presidency in 2008.

He knows especially that there is long-standing precedent for the Senate to allow a president leeway in staffing his or her administration by confirming all but the most objectionable nominees to Cabinet posts or other high-ranking positions. He knows that there is precedent for confirming judges to various levels of the judiciary, even the Supreme Court, even (sometimes) when those judges are ideological extremists.

Yet McCain still spent the last eight years gleefully participating in Republican efforts to block each and every legislative initiative or executive and judicial appointment by President Obama. He is now promising to do the same for the next president.

Anticipating Trump’s defeat, conservative politicians, commentators and thinkers are already spinning that they have figured out everything that went wrong with their party to allow Trump to snag the nomination against a pack of competitors labeled the “deepest bench” of potential nominees the GOP had fielded in decades. But McCain’s comments are pretty clear evidence that they have not. And if these norms continue being degraded, it will force Democrats to eventually take radical steps if they ever want to move serious legislation or SCOTUS nominations again.

For starters, if the Democrats win the Senate majority next month, they could decide it is time to do away with the filibuster for Supreme Court nominations. Which will send the Republicans up a wall, as it did when the Dems nuked the filibuster for all other judicial appointments a few years ago. Which will lead to retaliations the next time they hold the majority. And on and on.

Late on Monday, McCain walked back his comments about Clinton and SCOTUS nominations. Too bad he can’t walk back the last eight years as well.