Donald Trump's last performance: Here are the greatest debate moments from the craziest candidate ever

Remember when he discussed his peen or vowed to kill the families of terrorists? A tribute to the scariest clown 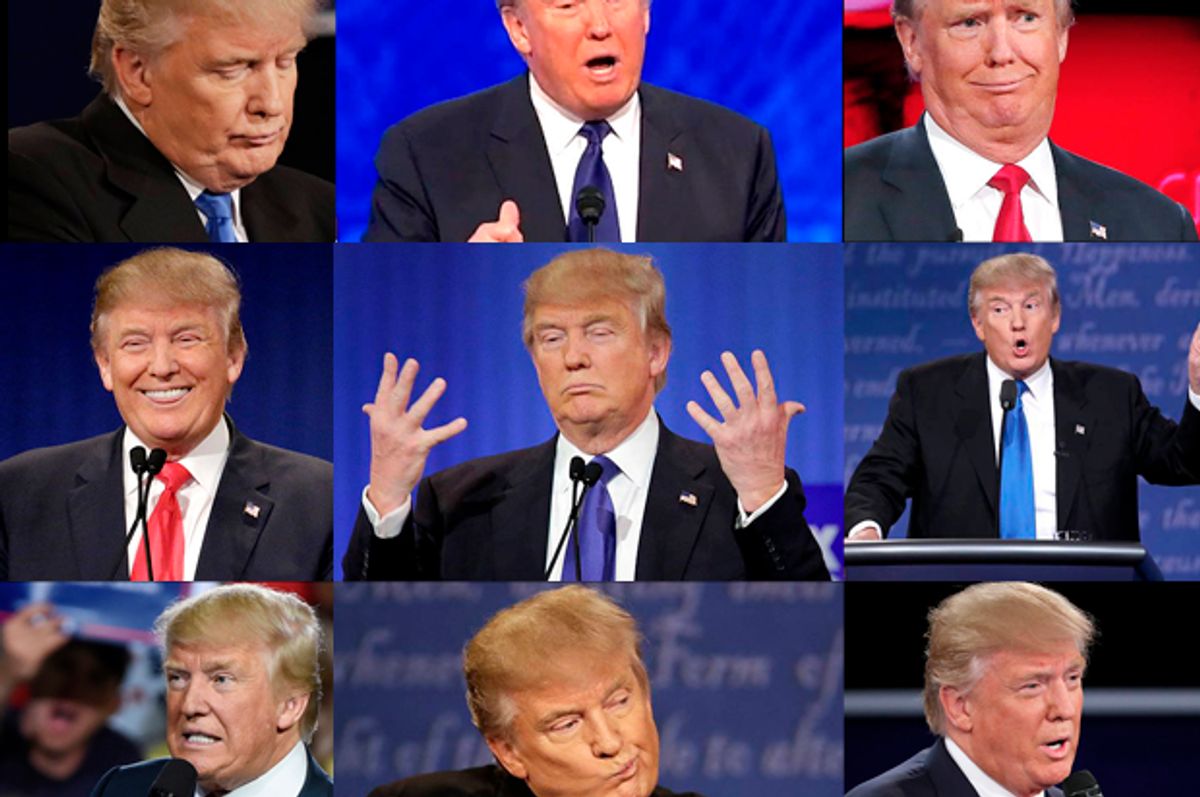 If there is any justice in this world, Wednesday night will be the last time we will ever see Donald Trump on the presidential debate stage. What's remarkable about typing that sentence is that his presence on that stage and in this race seems just as surreal today as it did a little more than 14 months ago when the Republicans held their very first presidential debate of the 2016 cycle in Cleveland.

Political junkies gathered excitedly to see if this unlikely frontrunner would fall apart or make an irreversible gaffe before the whole country. We're still doing that. Give the man his due: He's a high-wire act who has managed to keep us all riveted for more than a year, just waiting for him to fall.

It's tempting at this late date to be jaded and say that Trump's unpredictability has always been overhyped. But it really wasn't: This man has said and done things in presidential debates that nobody else has ever done. He has been completely unprepared, crude, arrogant and seemingly unaware that he has been making a fool of himself.

And he just kept going, winning primaries by hook or crook, all the way to the end. To call him a rule breaker is inadequate. His debates have been train wrecks from the very beginning. In the primaries, at least, that seemed to thrill a substantial portion of the Republican electorate.

The first primary debate in Cleveland foreshadowed every Trump debate to come. I wrote at the time, "Nobody really knows how Trump did. The normal rules of politics don’t seem to apply to him, so although he didn’t seem as commanding on the stage as his fans may have hoped, you just never know. For what it’s worth, if my local news was any guide, Trump was triumphant: 'He stood his ground and apologized for nothing.'"

And so it has gone ever since.

But looking back, his Achilles' heel was evident in that first debate. Fox News' Megyn Kelly was the moderator and famously confronted him about his treatment of women. His reaction on the next day — launching a public feud with Kelly — seems to have been noted by the Clinton campaign. Democratic presidential nominee Hillary Clinton skillfully baited Trump when they met in the first general election debate, and he never recovered.

The Republicans held 12 debates during the primary season and they all were roughly the same. Trump crudely insulted his rivals, said many stupid things, showcased his bigoted and authoritarian views — and thrilled his voters each and every time. In the early days there were so many candidates that he got less airtime. But he always dominated. Here are some of the highlights:

Standing before Ronald Reagan's Air Force One at the former president's library, Trump let it fly. He insulted Sen. Rand Paul's looks and Jeb Bush's wife. He said he thought Carly Fiorina had a beautiful face when the moderator brought up a quote when Trump had — insulted her face.

Trump got angry at the moderator, John Harwood, for suggesting that he was running a "comic-book campaign." The whole group had a hissy fit that the debate questions were unfair.

Trump asked the moderator to stop Carly Fiorina from interrupting him. He dismissed Gov. John Kasich as an unworthy opponent who got lucky when Ohio discovered fracking.

As I wrote at the time, Trump "reiterated his call to kill the relatives of terrorists, at one point even petulantly bellowing, 'So they can kill us, but we can’t kill them?' He also proved that he had no idea what the 'nuclear triad' is and suggested that you can 'shut down certain areas' of the internet."

The bromance between Trump and Sen. Ted Cruz finally ended, with Cruz attacking Trump's "New York values" and Trump responding with his best line in the whole campaign: "The people of New York fought and fought and fought, and we saw more death — the smell of death was with us for months."

Trump was still mad at Megyn Kelly so he didn't show up, holding a veterans fundraising event instead. Months later he had to be publicly prodded to fulfill his pledge to donate the money.

Trump called everyone on the stage liars to their faces, and hit former governor Jeb Bush for his brother having been asleep at the wheel on 9/11 and wrongly invading Iraq. The pundits all said Trump had gone too far; that you couldn't say that in South Carolina. He won the primary.

Trump said no one on the stage had done as much for Israel as he had. After the debate, he claimed the IRS was auditing him because he's such a "strong Christian."

This was the night Trump talked about his penis: "Look at those hands, are they small hands? And, he referred to my hands — 'If they're small, something else must be small.' I guarantee you there's no problem. I guarantee." This was also the debate in which he insisted that the military would follow his orders without question, even if those orders were to commit war crimes, which he openly endorsed.

The final debate with the final four: Sen. Marco Rubio, Kasich, Cruz and Trump. It was the scariest of all because they were all composed, civil — and completely insane. Trump had triumphed over the Republican Party. It was obvious he was going to win the nomination.

Hillary Clinton easily won the two previous general election debates. At this stage in the campaign, people expect the candidates to be knowledgeable and prepared. Trump is capable of being neither.

It's always possible he could throw Clinton off-balance with his usual antics, so everyone still has that breathless sense of anticipation wondering if the whole thing is going to turn into even more of a freak show than it's already been. It's made for good TV, but it's been a travesty for our country. Let's hope that this encounter in Vegas is the last debate of its kind.