George Will is a fan of voter purging. He's also an old white male. That explains it 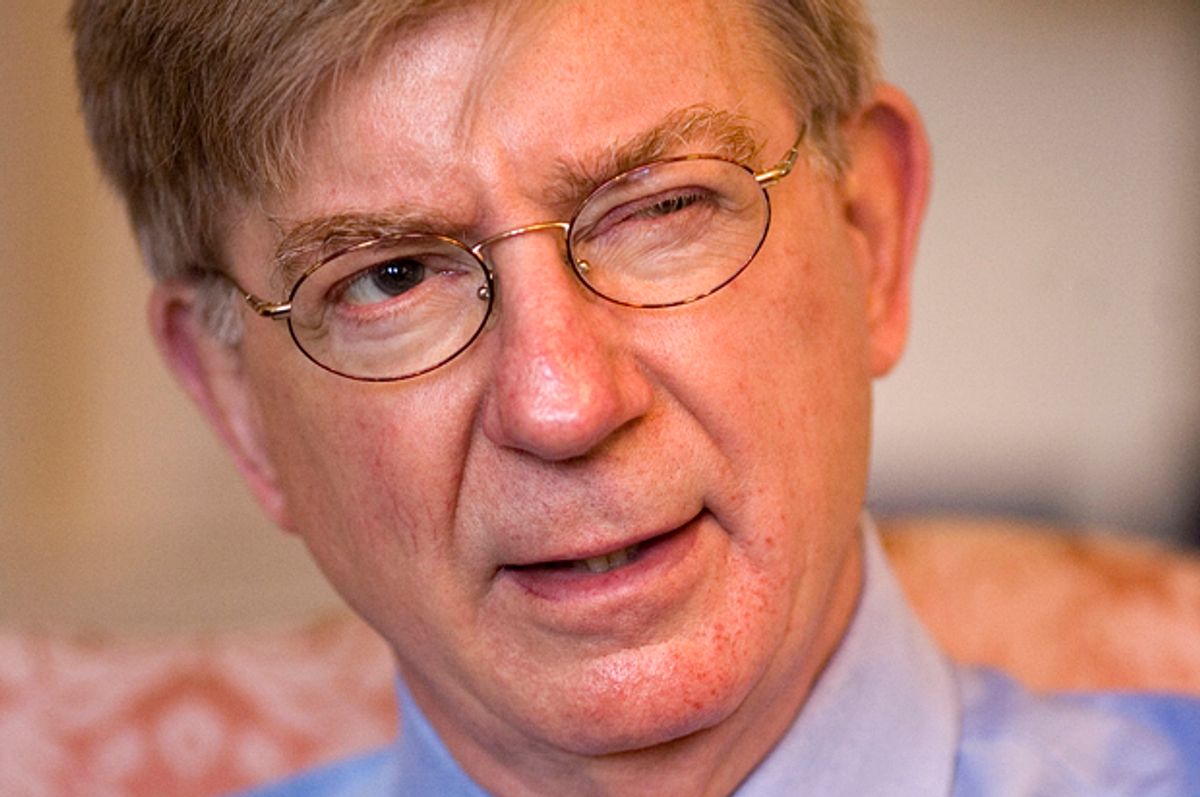 As most of the conservative fold realizes that conspiracy theorist Donald Trump is Godzilla and the Republican Party is Tokyo, George Will is dipping his toes into the Pacific Ocean and thinking, maybe there's something here.

On Monday, Will told Fox News that Trump "has a point" when he claims that the election is rigged, according to a transcript via RealClearPolitics:

It is hard to think of an innocent reason why Democrats spend so much time, energy and money, scarce resources all, resisting attempts to purge the voter rolls, that is to remove people who are dead or otherwise have left the jurisdiction. It's hard to think of an innocent reason why they fight so tremendously against Voter I.D. laws. They say, well, that burdens the exercise of a fundamental right. The Supreme Court has said that travel is a fundamental right and no one thinks that showing an I.D. at the airport burdens that fundamental right.

We know — we don't surmise — we know that the 2010, '12 and '14 elections were rigged by the most intrusive and potentially punitive institution of the federal government, the IRS.

First of all, the election is not rigged. This can't be stressed enough. Also, if Will is claiming that the 2010 and 2014 elections were rigged (they weren't), they would have been rigged for Republicans, who during the midterms rode two wave elections.

And we'll completely ignore his claim that "vote rigging" includes Internal Revenue Service audits of whether 501(c)4 organizations are really "promot[ing] the social welfare" — or existing to create valuable and profitable email lists for others to rent.

But here's the reason why Democrats "spend so much time, energy and money" resisting attempts to purge the voter rolls. Because most of the time, that's code for "making sure lots of Democrats don't vote."

According to a Rolling Stone investigation, a recent voter purge was aimed squarely at Democratic demographics. The analysis found that "young, black, Hispanic and Asian-American voters" were being purged, "with some of the biggest possible purges underway in Ohio and North Carolina, two crucial swing states with tight Senate races."

The multistate list used for identifying those to be purged was incomplete: A quarter of the names on the list, known as Crosscheck, lacked a middle-name match for those to be removed. The system "also can mistakenly identify fathers and sons as the same voter. . . . A whole lot of people named 'James Brown' are suspected of voting or registering twice" and may not include matching Social Security numbers.

As a result of that, "one in six Hispanics, one in seven Asian-Americans and one in nine African-Americans in Crosscheck states" were targeted for a voter purge.

In Georgia, 180 African-American voters were flagged for a purge in Hancock County, The New York Times reported in July. The purge attempt would have removed a fifth of the registered voters in the city of Sparta. Of the 53 voters who were disenfranchised, 27 of them had their voting rights restored.

In Ohio, more than 200,000 voters were purged. A quarter of them came from heavily Democratic Cuyahoga County (which includes Cleveland), where nearly 30 percent of the residents are black.

In June, Reuters found that Ohio's recent voter purge removed 10 percent of registered voters from "heavily African-American neighborhoods near downtown." In the suburban neighborhood of Indian Hill, "only 4 percent have been purged to inactivity." The state removed residents who voted for Barack Obama in 2008, but didn't vote in 2012 or either midterm election.

Republicans have pushed illegal voter ID laws and have pursued a questionable tactic known as "voter caging." Even if the people affected by these voter-suppression strategies are able to get to the polls, they would have to file provisional ballots and could face longer lines in fewer polling places. Such tactics, unsurprisingly, have mainly been applied in minority areas.