The big auto short: The next subprime lending bubble could be about to burst 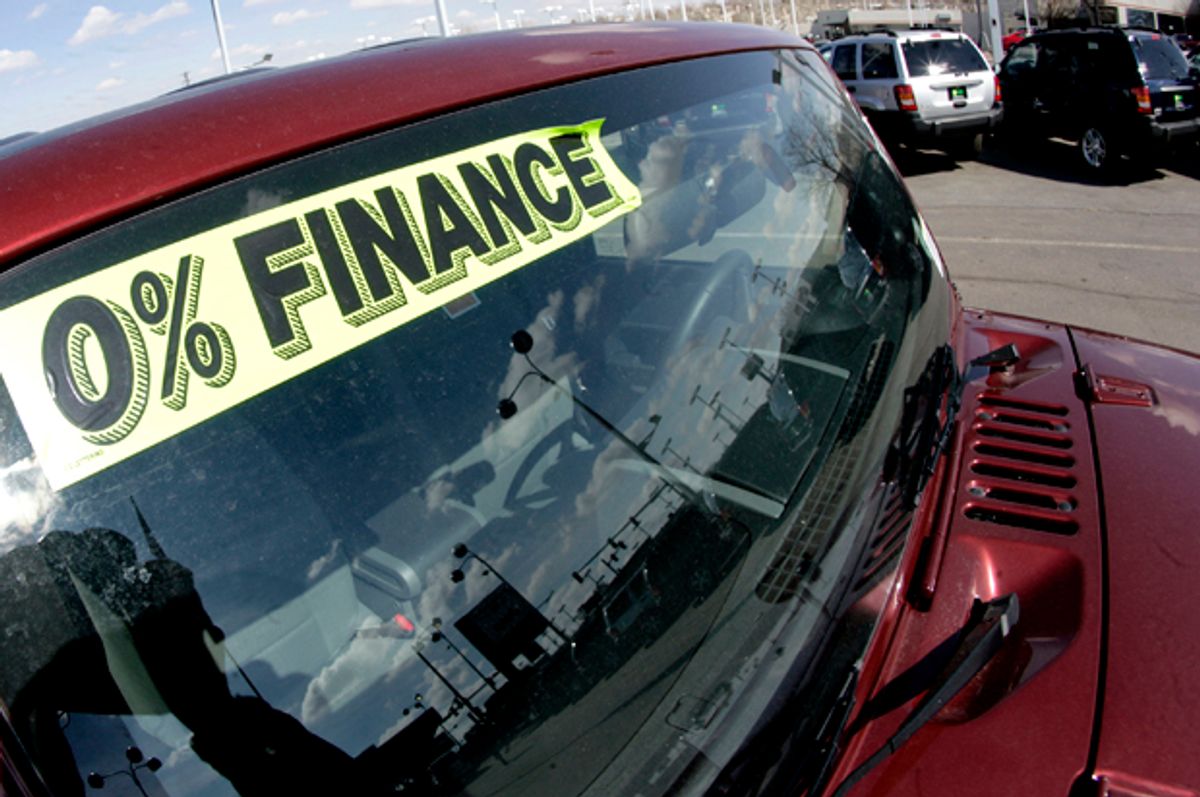 For years now, the U.S. auto market has been booming as manufacturers, dealerships and consumers have benefitted from record-low borrowing costs, spurring ravenous demand for passenger cars and trucks in the post-Great Recession recovery. But recent market signals, including softer new-car sales, more discounts and idling car factories, indicate buyers are starting to tap the brakes to their purchases following six consecutive years of growth.

But the term “sales” obscures one of the basic facts of car buying. Most new and used cars purchases are financed. In fact, auto loans account for $1.1 trillion of America’s household debt. Borrowers piled on $32 billion in auto-loan debt in the second quarter of 2016 alone compared with the previous year. Automotive debt outpaced all other forms of debt in the second quarter, according to the latest data from the Federal Reserve Bank of St. Louis.

About 8 percent more auto loans were dished out in the three months ending June 30 than in the same period during the previous year. At the current pace, auto-loan debt could soon surpass student loans as the second most common form of household debt, according to data trends tracked by the Federal Reserve Bank of New York.

Meanwhile, concern is growing over the tens of millions of Americans driving around in cars that are "underwater" — that is, worth less than the outstanding balances on their financing plans. This, coupled with increased signals that risky subprime borrowers are struggling to make their monthly car payments, is putting a spotlight on the loose lending practices that resemble the way many buyers were hoodwinked a decade ago into home mortgages that they couldn’t afford.

“People are increasingly missing payments within the first six months of taking out their auto loans, which is a telltale sign that loans are being made that are clearly unaffordable,” Chris Kukla, senior vice president of the nonpartisan Center for Responsible Lending, told Salon.

Nearly 1 in 5 risky subprime borrowers are 60 days behind on their car payments, according to the most recent S&P Global Ratings data: that’s the highest rate since early 2010 in the wake of the mortgage-lending crisis. Even worse, the 60-day delinquency rate for all subprime loans that have been packaged into marketable bonds from 2010 to 2015 was at its highest level in nearly two decades.

Fueling this demand for subprime auto lending are investors in pursuit of higher returns (or yields) by investing in bonds dependent on subprime borrowers' making their payments. Investors believe, perhaps rightly so, that Americans will do just about anything to ensure that their cars — often their only way to get to and from work — are not  repossessed.

“The car lending market is based on a bet, especially in the subprime lending market, that consumers will continue to prioritize their car payments over every other debt payment that they have,” said Kukla, who serves on the advisory board of the Consumer Financial Protection Board. “The line I hear consistently is ‘you can sleep in your car but you can’t drive your house to work.’”

So far, subprime auto loans been a decent bet for people who profit from lending money to poorer car buyers. And it's given rise to another practice that’s faced the ire of regulators: interest-rate markups, when dealers add a different interest rate on top of their own borrowing costs depending on the customer, a practice that has led to accusations of racial profiling.

The sky isn't falling yet, however. Total automotive delinquency rates remain stable, according to the S&P/Experian Auto Default Index, a measure of the health of the auto-lending market. But a rise in delinquency rates from subprime borrowers, whose loans make up about 19 percent of all car loans, should serve as a warning to the industry as a whole that lenders are taking greater and greater risks with riskier customers.