How Chris Wallace raised eyebrows with one big idea 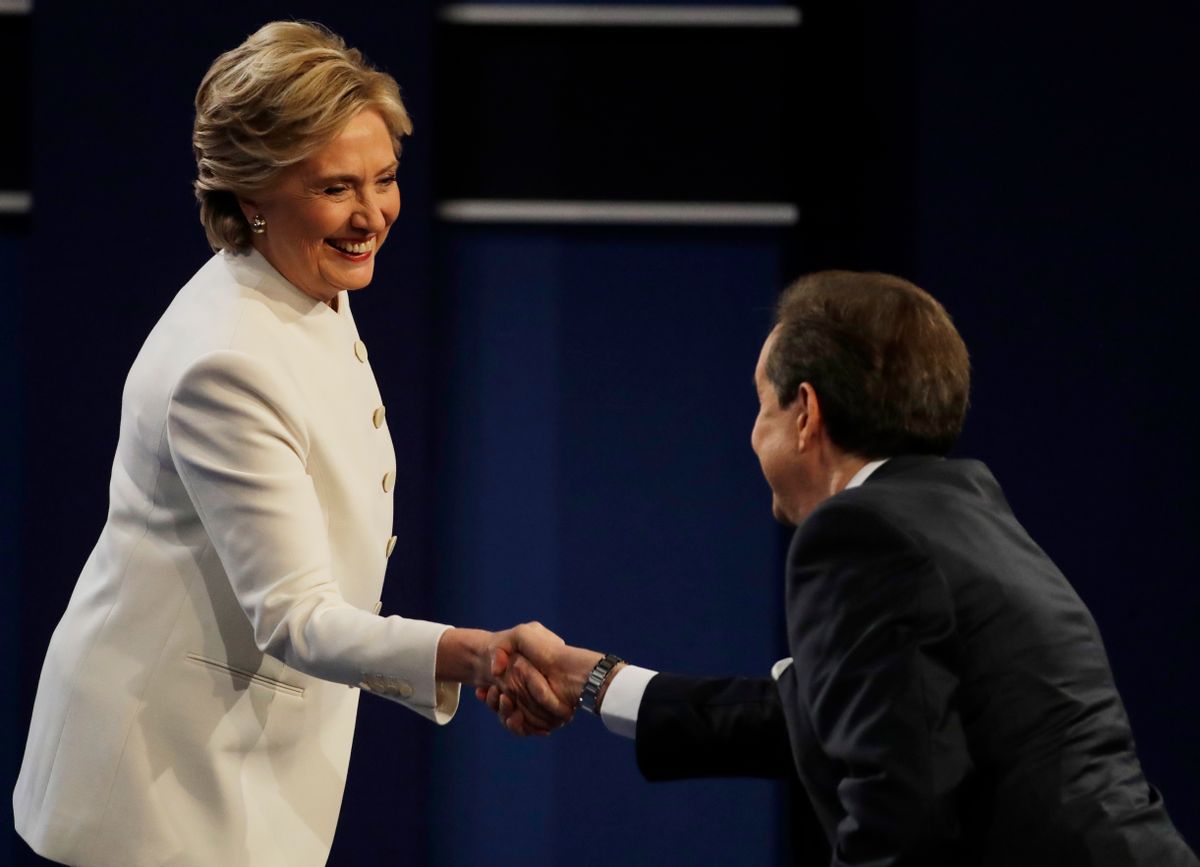 NEW YORK  — Fox News' Chris Wallace worked hard to keep the final presidential debate substantive with tough questions to Hillary Clinton and Donald Trump, but it was the simplest of queries that extracted the biggest headline.

Noting Trump's claims Wednesday night that the election was being rigged against him, Wallace asked the Republican whether he would accept the results win or lose, saying GOP vice presidential candidate Mike Pence had said that he would. When Trump answered that "we will look at it at the time," Wallace seemed incredulous.

The veteran newsman pointed out that a peaceful transition of power is one of the nation's longest traditions, no matter how tough the campaign.

"Are you saying you're not prepared to commit to that principle?" Wallace asked.

Answered Trump: "I will keep you in suspense."

Wallace walked the finest of lines during a campaign where debate moderators received an intense focus. As the first-ever general election moderator of Fox News, he had the hopes of an organization in the midst of a tough year riding on him along with additional baggage. Fox critics worried that he'd go easy on Trump because of the GOP bent of Fox's prime-time lineup.

He kept things straight and issue-oriented and rode herd on the audience and candidates to keep control. Wallace promised he would not take on the role of fact-checker and largely adhered to that, although he had one nasty exchange with Trump in correcting the candidate on statements made in Syria in the last debate.

Wallace tended to open a subject area with a general question before boring in on specifics to each candidate. For instance, he asked each candidate about their philosophies in naming Supreme Court justices, then moved in to ask Clinton about partial-birth abortions and Trump about whether he sought to overturn Roe vs. Wade.

"It was a fair and balanced debate," said Megyn Kelly, Wallace's Fox colleague. "He pressed both sides."

Wallace asked Trump about the Republican's denials that he had groped or made unwelcome advances to women. Several women have come forward with stories following the release of a lewd "Access Hollywood" tape where Trump bragged of touching women against their will, after Trump denied that he had engaged in the conduct.

When Trump claimed that "nobody has more respect for women than I do," some audience members in Las Vegas laughed — and Wallace was quick to scold them. "Please, everybody," he said.

While Trump twice made it a point to thank Wallace for questions posed to Clinton — including the former secretary of state's claims in a leaked email about free trade — the Republican seemed visibly angry when the newsman tried to correct him on points made about Syria in a previous debate.

"If I may finish the question," Wallace said.

His toughest exchange with Clinton came when he asked the Democrat about "pay-to-play" charges surrounding people who made contributions to the Clinton foundation. When Clinton answered by praising the work the Clinton foundation had done, Wallace interrupted her with a reminder to answer the question posed. She didn't get the chance, since Trump interrupted at about the same time, and Wallace turned to him for a rebuttal.

While occasionally wordy, Wallace's questions seemed designed to get the candidates talking and he mostly let them go at it. The candidates — typical for most debates — bulldozed past his questions at times but there seemed fewer interruptions than in the previous two debates.