Hillary Clinton is an actual feminist: She met Trump's misogyny head on, without apology

Instead of going cautious and playing it safe, Clinton leaned hard toward feminism in the final debate with Trump 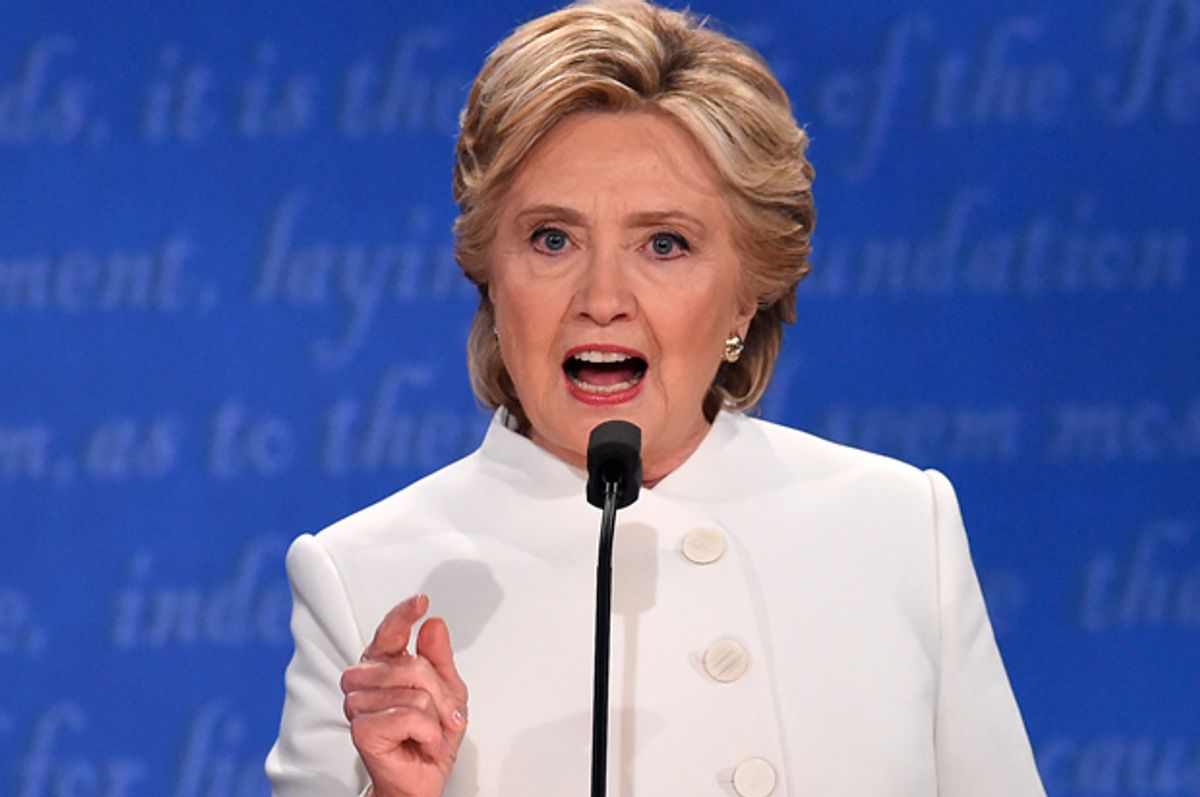 Hillary Clinton frequently gets characterized as an overly cautious politician, afraid to go out on a limb and swift to scurry towards some ill-defined "middle" at the first sign of conflict. Part of that reputation is due to people's mistaking her for her husband. But part of it is her own fault, as she tended to take that approach in the 2008 Democratic primaries, leaving it to Barack Obama to portray himself as more liberal, even though Clinton was actually somewhat to the left of her primary opponent.

In Wednesday night's debate — thankfully the last of this endless election season — Clinton proved her detractors wrong. Her opponent this time, Republican Donald Trump, is an obnoxious misogynist who literally bragged during the debate that he didn't even apologize to his wife after a tape came out featuring him bragging about sexually assaulting women. Despite this, Trump continues to poll well with more than 40 percent of voters.

A more skittish politician would see that and assume the country is still incredibly sexist and not ready for a strongly feminist message and try to find some middle-ground way to tiptoe around the issue of women's equality.

Clinton did the opposite. Faced with a misogynistic pig with a long record of belittling and objectifying women, Clinton leaned into the idea that voters want a feminist in office. (After all, the last president they elected is one!) Despite decades of pressure from the media to step back, soften her voice, be more submissive and bake more cookies, Clinton made absolutely sure that the debate-watching audience could not doubt her commitment to feminism.

"In the 1990s, I went to Beijing and I said women's rights are human rights," Clinton reminded audiences. Younger voters may not know how controversial that was at the time. But if that statement seems obvious now, it's in no small part because Clinton had the ovaries to say it out loud then on a prominent international stage.

It took more than a year to get here, but finally Clinton got to be in a debate in which she was directly asked about abortion rights, and she offered a full-throated defense of reproductive rights.

When moderator Chris Wallace tried to reframe the issue in terms of "late-term" abortion, a vaguely defined term, Clinton was quite clear exactly why women get these relatively rare abortions.

"I have met with women who toward the end of their pregnancy get the worst news one could get, that their health is in jeopardy if they continue to carry to term or that something terrible has happened or just been discovered about the pregnancy," she said.

In response, Trump, who seems to take many of his talking points from the Breitbart comments section, demonized women who receive medically necessary abortions by saying, "You can take the baby and rip the baby out of the womb of the mother just prior to the birth of the baby."

Clinton did not recoil, though, and defended the honor of women whose personal tragedies are being used for demagoguery against women's rights.

"You should meet with some of the women that I have met with, women I have known over the course of my life. This is one of the worst possible choices that any woman and her family has to make," Clinton said solemnly.

Another feminist hot topic came up later, in connection with the release of a tape with Trump's bragging about sexual assault — and all the women who have since stepped forward and claimed they have been on the receiving end of the very behavior he bragged about.

"At the last debate, we heard Donald talking about what he did to women," Clinton said, in full lawyer mode. "And after that, a number of women have come forward saying that's exactly what he did to them."

She continued, "Now, what was his response? Well, he held a number of big rallies where he said that he could not possibly have done those things to those women because they were not attractive enough for them to be assaulted."

Clinton went on to offer some quick feminist analysis, saying, "Donald thinks belittling women makes him bigger. He goes after their dignity, their self-worth, and I don't think there is a woman anywhere who doesn't know what that feels like."

To be clear, any male politician who had an opponent such as Trump would likely make the same arguments. But as a woman and a feminist, Clinton was in a perfect position to really dig into this issue. When she said this really is something all women have experience with, it doesn't feel abstract, as it would for a male politician. She has direct personal experience with this. She has the war stories to back this up.

Just last week it happened to her, when Trump made comments disparaging her looks. Hell, it happened in this debate, when Trump called her a "nasty woman" for daring to sound smarter than him on policy issues — not that it's all that hard.

What can I say? As a fellow feminist, I'm proud of Hillary Clinton. She could have played it safe, offering minimal defenses of women's rights but shying away from touchy subjects like abortion, sexual harassment and abuse. She's ahead in the polls, so the temptation to play not to lose must have been sky-high.

Instead, Clinton sees the opportunity at this moment, when the country is mesmerized by this snarling and snorting misogynist, to not just win an election but push for feminist gains in the culture at large. She is not content to offer some pablum about how Trump's words and deeds are inappropriate but has chosen to speak more broadly about how sexual harassment and sexist chatter about women's bodies is used to put women in their place and reinforce male dominance. She may not use feminist buzzwords, preferring plain language that can reach all audiences, but her point is unmistakable.