Science issues seem to divide the country along party lines, which raises the question: Why? 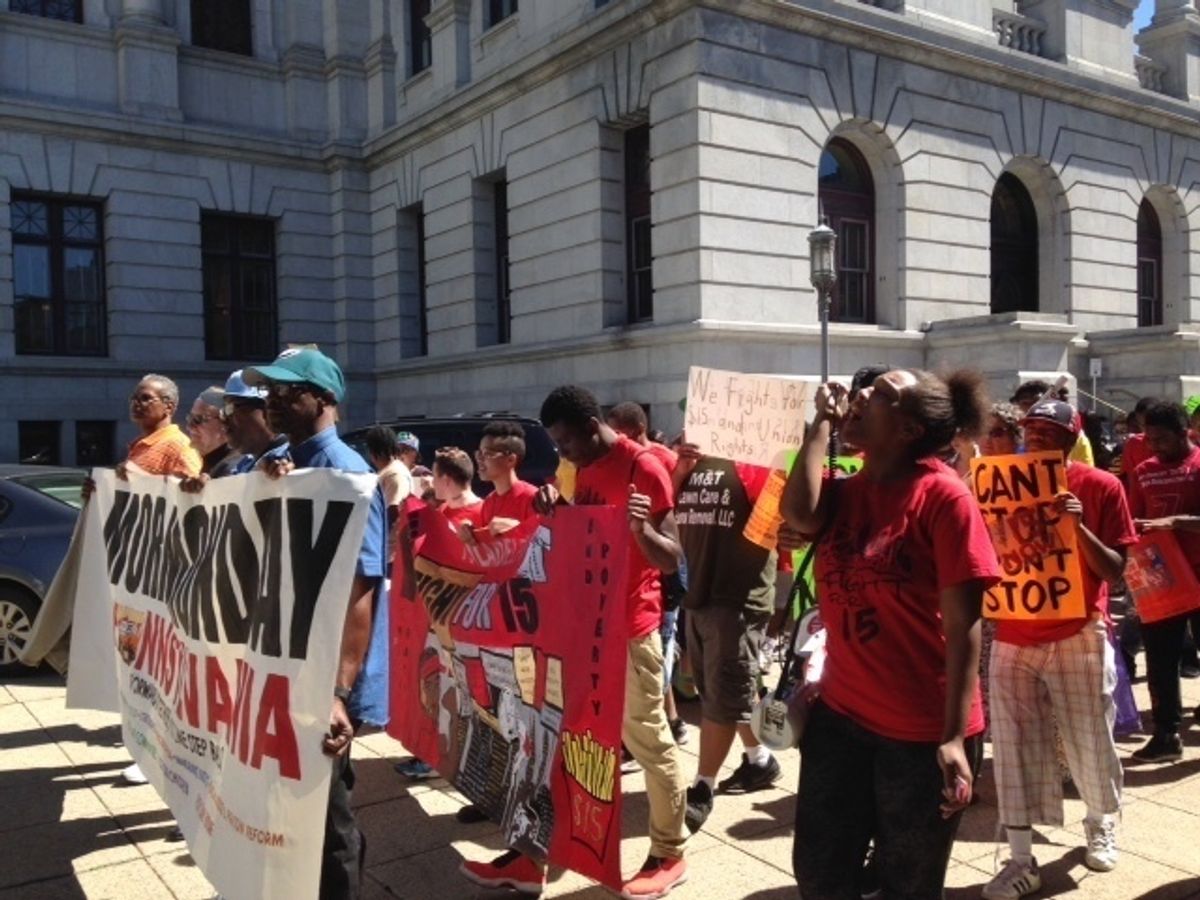 Some of the roughly 200 people who attended the Higher Ground Moral Day of Action march around the Capitol, after a rally on the buildings front steps, Monday, Sept. 12, 2016, in Harrisburg, Pa. A prominent part of their message was support for raising the minimum wage to $15 an hour, but they also advocated for action on climate change and greater use of clean energy, prison reform and union rights. (AP Photo/Mark Scolforo) (AP)
--

Much has been made about the predictable partisan split between presidential candidates Hillary Clinton and Donald Trump on issues of science and public policy. But what about their supporters? Can Americans really be that far apart in terms of science?

That liberals and conservatives have different opinions toward science is taken as a given. Typically, conservatives are painted as anti-science, with some studies suggesting their mistrust of science is increasing. Liberals, on the other hand, are usually assumed to be more receptive to science in general and more supportive of using science to shape policy.

Noting that party affiliation is different than political ideology – not everyone who identifies as liberal is a Democrat and not everyone who identifies as conservative is a Republican – these characterizations certainly seem to be true when we look at major leaders of the political parties. Many Republican politicians have publicly expressed doubts over the scientific consensus on climate change, for instance. At the top of the Republican presidential ticket is Donald Trump, who has called climate change a Chinese hoax and is on the record as supporting any number of other conspiracy theories. Conversely, Hillary Clinton’s line at the Democratic National Convention – “I believe in science” – was met with resounding applause.

Assuming that the stated views of outspoken politicians reflect the personal beliefs of voters within their parties is tempting. After all, voters elect politicians, presumably on the basis of having comparable worldviews. But research suggests that the link between partisanship and views on science may not be so cut and dried. Buried in the data is a much more nuanced relationship that’s well worth examining. As a sociologist who focuses on ways to communicate science issues to the public, I’m interested in how a more clear-eyed view of this connection could be used to help combat anti-science attitudes.

In 2015, researchers asked 2,000 registered voters how deferential they felt politicians should be to science when creating public policy on a variety of issues. On a 10-point scale, participants ranked whether politicians should follow the advice of scientists (10), consider scientific findings in conjunction with other factors (5) or ignore scientific findings completely (1). Issues included climate change, legalizing drug usage, fetal viability, regulating nuclear power and teaching evolution, among other topics.

The participants then responded to questions about their political affiliation and ideological views, religious beliefs and other demographic variables.

Most people supported trusting the recommendations of scientists on policy issues, even politically contentious ones. The average score for all participants across all issues was 6.4, and the lowest-scoring issue (letting same-sex couples adopt children) was 4.9. The results suggest, in other words, that even on divisive issues, Americans think that politicians should take scientific recommendations into consideration when making public policy.

Breaking down responses based on political leanings did reveal some partisan differences. When it comes to deferring to scientific experts on policy issues, conservatives and independents look a lot alike. Averaged across issues, independents said policymakers should weigh science and other factors more or less evenly (5.84), only slightly more than conservatives did (5.58). Liberals, on the other hand, expressed much higher rates of deference to science – across issues, they averaged 7.46.

These findings are interesting because we tend to think of independents as the middle-of-the-road in American politics. If conservatives and independents are on the same page, though, it means that liberals are the outliers, so to speak. In other words, rather than most people putting an emphasis on science while conservatives steadfastly ignore it, the truth is that many people want other factors included in policy discussions. It’s liberals who are further from the pack on this issue, wanting more emphasis on science than their peers.

It’s not their politics, it’s their values

Other research has similarly found that science denial can run the political spectrum. For instance, another study examined attitudes about climate change, evolution and stem cell research and found that partisan identification was not necessarily a good predictor of how someone will feel about these controversial issues. In fact, very few participants were found to be skeptical of science across the board. And reactions to these specific issues were more tightly linked with religious attitudes than with political ones.

Other scholarship echoes these findings. Indeed, research does suggest that a certain segment of the population places more trust in religion than in science for understanding the world. But even among this group, science and religion are seen as conflicting only on certain topics, including the Big Bang and evolution.

One area in which political beliefs do have an impact is the kinds of scientists that liberals and conservatives are likely to trust. A 2013 study of 798 participants found that conservatives put more faith in scientists involved in economic production – food scientists, industrial chemists and petroleum geologists, for instance – than in scientists involved in areas associated with regulation, such as public health and environmental science. The opposite was true for liberals. Again, this suggests that it’s not simply a matter of conservatives being skeptical of science in general; there’s a much more nuanced relationship between political leanings and trust in scientific expertise.

So why does it appear that liberals and conservatives are living in different worlds when it comes to issues of science? Partisanship clearly plays some role in how people view science and their willingness to trust scientific information. And because these disagreements tend to come on high-profile issues like climate change and evolution, about which there is already so much controversy, it’s easy to get the impression that the liberal and conservative divide on science must run incredibly deep.

Comes down to cultural cognition

To help explain why people fall in line with their fellow partisans on these high-profile issues, consider the theory of cultural cognition. This social sciences concept suggests it’s hard for people to accept new information that poses a threat to their values system. Addressing climate change, for instance, is often talked about in terms of government regulation of carbon pollution. For conservatives who oppose government involvement in the economy, this poses a threat to an idea they hold very dear.

No one likes to be wrong, of course. Cultural cognition theorists take this a step further and argue that there are social consequences to taking a position about a political issue that runs counter to what your community believes – just ask conservative former congressman Bob Inglis, who was defeated by a primary challenger in 2010 after speaking out on climate change.

From loss of business to strained interpersonal relationships, being the black sheep is hard. Rather than changing their beliefs about government regulation, then, it’s cognitively more comfortable for conservatives in conservative social circles to maintain skepticism about climate change. It’s less an inherent distrust of science, then, but rather a need to discount the science that supports policies that threaten a deep belief.

Everyone is subject to this effect. There are studies that suggest it’s stronger for conservatives, but liberals, too, come to mistrust scientific information when it challenges their worldviews. For instance, a 2014 study found that liberals will display the same sort of evidence-ignoring behaviors as their conservative counterparts when faced with arguments that go against their beliefs about policies like gun control. (Claims about liberals exhibiting anti-science bias on the issues of vaccination and genetically modified organisms are increasing, though they are challenged by recent studies.)

In other words, these divides may not reflect Americans’ attitudes toward science so much as other cultural and personal beliefs.

Get past assumptions to common ground

Having a more complete understanding of when and why liberals and conservatives trust science helps avoid oversimplifications. It’s an important stopgap using oversimplified assumptions to denigrate those who disagree with us politically.

None of this is to suggest that the anti-science viewpoints exhibited by Republican politicians on issues such as climate change should be ignored. Nor is it an argument that since “both sides” can fall for anti-science rhetoric, it can be waved away.

Rather, these findings indicate that, in theory, it’s possible liberals and conservatives could work together to encourage politicians to base policy recommendations on sound science, at least on some issues.

Maybe even more importantly, understanding the social and cultural issues surrounding the acceptance or rejection of science is a first step toward crafting messages that resonate with members of the public who question the science on hot-button issues. Research suggests using the right kind of messenger – someone who is trusted within the community – can be key to moving the needle. Science communications scholars have been hard at work devising other tactics to help reach people on issues of science. Hopefully they’ll trust the growing body of social science evidence to help guide their efforts.

Lauren Griffin, Co-Director of Research for frank and Manager of the Journal of Public Interest Communications, College of Journalism and Communications, University of Florida