The Jim Beam strike: Kentucky distillery workers have started a new whiskey rebellion in the name of sane hours 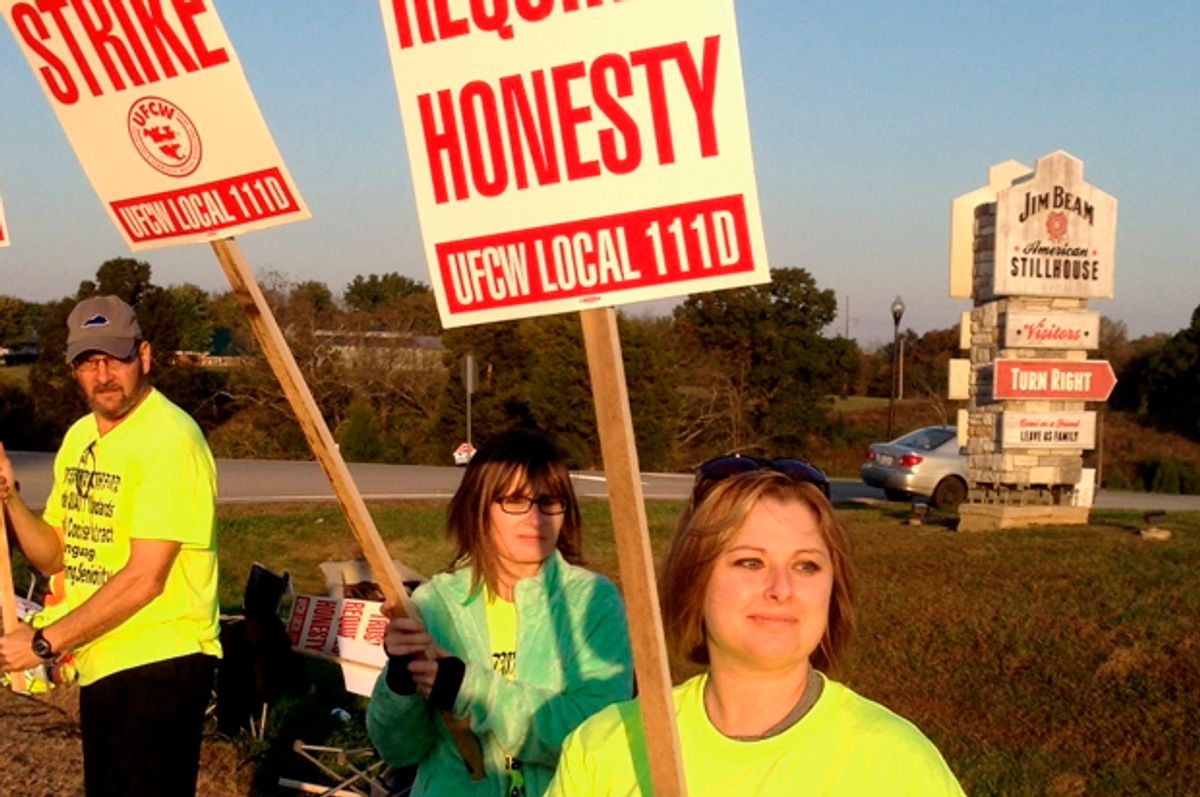 In the film "Lost in Translation," Bill Murray's character is in Tokyo to film an ad for Japanese whisky in which he recites the line "For relaxing times, make it Suntory time."

It turns out, for a number of American workers, Suntory time is anything but relaxing — often meaning, they claim, 80-hour work weeks. That's a major reason about 250 unionized employees at two Jim Beam bourbon distilleries in Kentucky initiated a strike, which entered its sixth day on Thursday after workers rejected a final contract offer from their employer, Beam Suntory, the Illinois-based subsidiary of Japanese food and beverage giant Suntory Holdings.

The issues behind the workers’ dissatisfaction are not higher wages or better health insurance — common matters raised when unionized workers enter contract negotiations with their employees. Instead, this strike was called because organizers say the contract offered by Beam Suntory doesn’t contain clearly defined job security and employee seniority terms. And workers, who claim they are often called on to work as much as 80 hours per week, say that the company needs to hire more employees instead of squeezing more and more hours out of their existing ones.

“We are seeking a better work-life balance and a return to the family values and heritage upon which the Jim Beam brand is based,” Jannelle Mudd, president of the local chapter of the United Food & Commercial Workers, told The Wall Street Journal. “All of us work hard and have earned and deserve a better life.”

This has become increasingly important issue up and down the U.S. labor pyramid, whether it's the low-wage hourly employees on call for work at any time or the mid-level professionals who are expected to respond to job-related communications any waking moment. Companies like Wal-Mart and McDonald’s have received serious criticism for erratic scheduling practices.

“When employers do this, not only is there no time for family, but there’s no time for community groups that depend on people, whether it’s Little League or the local food bank or people who volunteer in after-school programs,” Bronfenbrenner told Salon. “Who’s going to run the Girl Scouts group or who’s going to be the soccer coach? All of these things depend on people having free time.”

The distillery workers’ demands come amid a golden age for American whiskey, which is why they have been pushed to their limits. Exports of U.S. corn- and rye-based spirits have risen so significantly that Suntory decided to purchase Jim Beam for $16 billion in 2014. The new subsidiary company reported a 24 percent rise in its alcohol-related operating profits, to $391 million, in the first half of the year compared with the same period in 2015. This growth came in large part due to global demand for Jim Beam, the 221-year-old bourbon brand produced by the Kentucky workers now on strike.

Beam Suntory won’t comment on the complaints from its workers but the company has assured investors and customers that Jim Beam production won’t be slowed by the strike. The company has two other plants in Kentucky but has yet to say if it will also relying on temporary or contract employees to contend with the work stoppage.