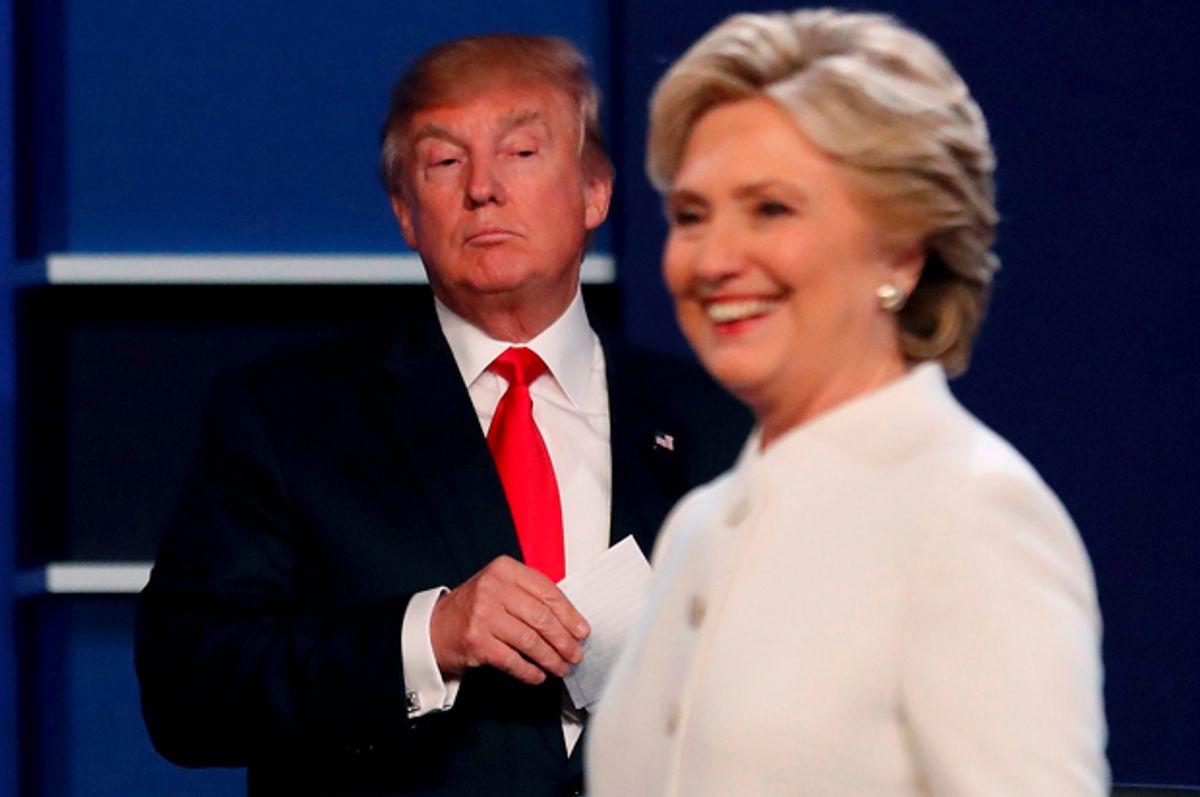 Look, America. Over there, in the distance. See that tiny, bright pinhole? That, friends, is the light at the end of this dark tunnel of an election season, visible for the first time now that the third and final presidential debate is over.

Now that Democratic nominee Hillary Clinton has faced down her Republican rival Donald Trump for one final round – this time in Las Vegas, the site of the final battle in Stephen King’s “The Stand” – we can at last set our sights on clawing our way through the muck until we see the bright glow of Nov. 9. But is that light from the sun or the glow of apocalypse? Are we seeing the glimmer of a new season dawning or a glimpse of springtime for Hitler?

Tough to say, given that Trump’s quote of the night involved his refusal to agree to a peaceful transfer of power in the likely event that he will lose. “I will look at it at the time,” he said, in direct contradiction to what his vice presidential pick Mike Pence and his daughter Ivanka said earlier. "I will keep you in suspense, OK?"

CBS commentator John Dickerson would later point out that while Trump has gotten a great deal of mileage from being a disruptive candidate and “punching the system in the nose,” that stance is a bridge too far.

“When you question something that is the pillar of American democracy, which is the peaceful transfer of power, and you do it perhaps for your own ends, that's going past just punching the system in the nose; that's punching the actual undergirding of the system and kicking its legs out from under it,” Dickerson told Gayle King. “And that's what worries people about this talk.”

Overall, Wednesday night’s debate at the University of Nevada, Las Vegas was less of a sucker punch to America’s audience than the previous face-offs. Yes, there were references to immigrants flooding across our borders as “bad hombres,” a hideous, uninformed interpretation of late-term partial birth abortions (“rip the baby out of the womb on the ninth month, on the final day!”) and references to Chinese steel as a punch line.

In spite of all that, the Las Vegas showdown wound up resembling an actual debate at times — the most substantive one of the election season, truth be told — as moderator Chris Wallace did his ablest to hold the candidates to his chosen topics: debt and entitlements, immigration, the economy, the Supreme Court, foreign hot spots and the contenders' fitness to be president.

Plainly, the Fox News anchor learned from the struggles of his predecessors, devoting much of his energy to keeping the audience in check as opposed to breaking up the inevitable skirmishes between Clinton and Trump. Wallace refused to allow Trump or Clinton to pivot away from answering his questions without pushing back. And while he didn’t fact-check them, he did hold both Clinton’s and Trump’s feet to the flames when they attempted to be evasive.

But from a viewer’s standpoint, the most noticeable difference was in each candidate’s comportment. Trump, who famously declared himself as “unshackled” from the GOP in a Tweet last week, was unusually calm as the debate began and unusually almost free of the sniffles. He even appeared to have read a few things.

Asked about his potential selections for the Supreme Court, Trump adopted a tone that was measured and could almost be interpreted as reasonable as he reassured the gun lobby and his evangelical voters that he supported the Second Amendment and intended to appoint pro-life judges.

“The Supreme Court —  it’s what it’s all about,” he offered as a smooth conversation opener, channeling Alec Baldwin. (That famous “Saturday Night Live” skit may have ticked off the Orange One, but obviously he learned something from it — if you’re going to flub, make it quotable.)

Clinton, meanwhile, relaxed into tough stateswoman mode, shedding the obligations foisted upon her by the media to not look too intimidating, to smile but not too much, to levitate a little but not fly. All that went out the window once Trump was accused of sexual impropriety by nine different women.

There was no effort to modulate her tone, no shoulder shimmying to be had. In a battle of policy expertise, there was no reason to pull her punches. Instead, Wednesday night’s Clinton went for the jugular, fact-checking her opponent onstage instead of sending viewers off to her website.

And amazingly, she was able to unhinge Trump yet again by, as comedian Jordan Peele put it, grabbing Trump by the Putin.

That was when the unshackled GOP candidate really became unhinged.

Trump, who was already fidgeting with the mic, squinting into the camera and leaning in to interrupt Clinton with his classic objection of “wrong,” appeared to go full puffer fish at that juncture, aiming and missing the target in speaking about the economy, job growth and foreign policy and ISIS.

Then Wallace asked Trump to address the allegations of the nine women who had said Trump had either groped or kissed them without their consent. “The stories have been largely debunked,” he replied. “Those people, I don't know those people. I have a feeling how they came; I believe it was her campaign that did it.”

And Trump’s performance scuttled downhill from there, sinking to its nadir when he actually made the audience in the hall laugh by declaring, “Nobody has more respect for women than I do. Nobody.”

Of course, not less than 20 minutes later, as Clinton discussed her plan to replenish the Social Security trust fund, Trump decided to interrupt her by saying, apropos of nothing, “Such a nasty woman.”

Just as at the outset of the debate, the candidates refused to shake hands with each other, it ended with Clinton shaking Wallace’s hand and staying to address members of the audience, as Trump uncomfortably remained near his podium, waited for his family to join him then absconded to their limo not long afterward.

When asked about how Trump looked in the third debate, most pundits agreed he started out composed. But by the end, as GOP strategist Steve Schmidt told MSNBC’s team, “He was like an old man in the park feeding squirrels, arguing with himself on the question of Mosul.”

The question of who won the debate is probably moot. History indicates that third debates don’t have a remarkable effect on the polls when all is said and done. What matters is that we have traversed one nasty leg in this psychological minefield of a campaign, and we never have to go back.

All that’s left is for us is to make sure we don’t take the nation backward. Wallace ended the third debate by allowing the candidates to make their final pitch to the nation, before advising viewers to participate in the process. “Nov. 8 is just 20 days away. One thing everyone here can agree on, we hope you will go vote,” he said. “It is one of the honors and obligations of living in this great country.”

Yes, let’s move toward the light again, shall we? It’s so close we can almost touch it.