Ignoring Donald Trump's trolling won't make it go away, no matter how much you want to "go high" 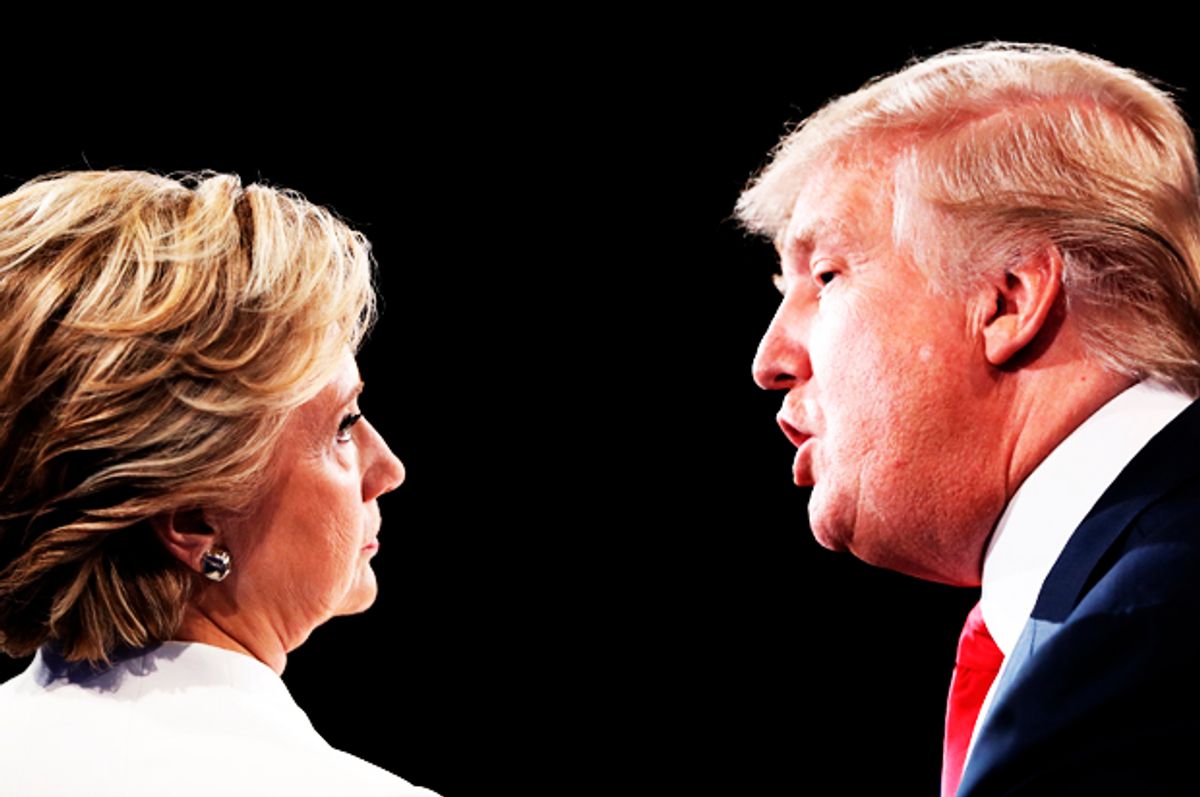 When you fight fire with fire, everyone gets burned.

That principle has been central to Democrat Hillary Clinton’s message in recent weeks, as her opponent, Republican nominee Donald Trump, wages a scorched-earth campaign against her. Trump, who until the general election presidential debates was virtually tied with Clinton in national polls, has watched what was once a close race devolve into a landslide against him.

The former secretary of state is up by 6 points in current poll averages from Real Clear Politics, and she has led by as much as 12 points in some estimates. The CEO has responded to the erosion in his support by launching an all-out assault on his opponent. He has threatened to throw her in prison, referred to her as “the devil” and even invited the women accusing her husband of sexual assault to the second debate.

Clinton has elected to be subdued in her approach to going after her opponent. Throughout the debates, the former senator has refrained from making equivalent attacks against him. Like the campaign ads that have quoted Trump’s own statements on women verbatim, Clinton has largely let his history of referring to women as “pigs,” “slobs” and “dogs” stand for itself. As a statement of intent, she has quoted first lady Michelle Obama's “When they go low, we go high,” as she memorably said at the Democratic National Convention.

That strategy of maintaining a positive message in the face of brutal mudslinging from her opponent is honorable. It’s also a necessary respite from the ugliest campaign in history, one in which Clinton’s Republican rival implied that supporters of the Second Amendment could euphemistically do something about her before she nominates more liberal judges to the Supreme Court.

There’s a well-known saying on the internet that when dealing with a troll — especially one of Trump’s caliber — you simply “don’t feed” him. Trolls thrive on getting a reaction, that paroxysm of disgust when a seemingly inviolable line has been crossed, and Trump lives over that line. Denying a troll attention, or even a response, cuts off his life source. Sans outrage, the Donald would seem to be a withered Tinkerbell.

The problem, however, is that Trump isn’t playing to win. Given that FiveThirtyEight has given him just a 12.4 percent shot at becoming president, a GOP victory becomes a greater impossibility with each passing day. If Trump can’t be the commander in chief, he intends to damage Clinton’s legitimacy to such an extent that it makes it extremely difficult for her to lead effectively. By branding Clinton as a liar and a criminal who will do anything it takes to become president — even steal the election — Trump hopes to ensure that both of them will lose on Nov. 8.

In Trump’s history of saying dangerous, inflammatory things about any number of groups, including Muslims and Latinos, perhaps none is as destructive as his recent attack on democracy itself.

The GOP nominee, as a last-ditch effort to save his failing campaign, has taken to claiming the election is “rigged.” According to Trump, there’s a vast conspiracy afoot that intends to deny him the presidency — one in which debate moderators, pollsters, political elites, news outlets and even "Saturday Night Live" have colluded to destroy his White House hopes.

Prior to the second presidential debate, he claimed that moderator Anderson Cooper was unfit to oversee the contest because he is “biased.” After Cooper called his admitted history of violating women’s consent “sexual assault,” Trump accused the CNN newsman of teaming with Clinton and moderator Martha Raddatz to gang up on him. “One on three,” he sighed melodramatically.

He revived that line of attack during last night’s contest during an exchange in which moderator Chris Wallace asked if Trump would concede should Hillary Clinton win on Election Day. While avoiding the question, Trump took the opportunity to lambast the forces that he believes are biased against him. Calling the media “corrupt,” he referred to coverage of his campaign as a “pile on.” He said, “It's so dishonest and they poison the minds of the voters but unfortunately for them I think the voters are seeing through it.”

Trump has also warned of potential voter fraud, telling his supporters to “go around and watch . . . polling places” in battleground states like Pennsylvania and Missouri. “Voter fraud is all too common, and then they criticize us for saying that,” he claimed at a rally in Colorado Springs, Colorado, earlier this week. “But take a look at Philadelphia, what’s been going on, take a look at Chicago, take a look at St. Louis. Take a look at some of these cities, where you see things happening that are horrendous.”

In truth, cases of voter fraud are extremely rare. That phrase is instead used as a dog-whistle term for voter suppression, as Jon Schwarz has explained in The Intercept. “Bogus claims of ‘voter fraud’ are part of the Republican Party’s DNA,” he wrote, “and are used as a transparently cynical attempt to justify restrictions on voting that suppress Democratic turnout.”

When the Republican Party was worried that it would lose a vital Supreme Court race in Wisconsin, local operatives suggested spreading rumors about “widespread reports of voting fraud” so that the GOP would be “positively set up for the recount regardless of the final number.” That tactic allows the party to push voter ID laws that keep people of color from voting in close races.

That is precisely what is happening in the presidential race. Trump instructed his supporters to visit majority nonwhite voting districts to “make sure [they're] on the up and up,” which has translated to outright voter intimidation. “I’ll look for . . . well, it’s called racial profiling,” one Trump voter told The Boston Globe. “Mexicans. Syrians. People who can’t speak American. I’m going to go right up behind them. I’ll do everything legally. I want to see if they are accountable. I’m not going to do anything illegal. I’m going to make them a little bit nervous.”

This tactic actually is against the law, but trolling the election is proving to be effective. A recent poll from the Associated Press found that only a third of Republicans believe that the voting process is fair and accurate, and half of those voting for Trump feel that the process is fixed against their guy. Three-quarters of the respondents further argued that, despite overwhelming evidence to the contrary, that voter fraud is common in U.S. elections.

“Trump has finally said something that that I've been thinking for years,” 30-year-old Jonathan Robinson of Columbia, Missouri, told the AP. “I don't think the votes have been counted properly for years. There's voter fraud and attempts to game the system. I don't trust it at all.”

In the past, Trump has been extremely skillful at pushing an agenda that, while baseless and patently untrue, serves to derail his opponents. During Obama’s first two years in office, he fought off the allegations that he was not born in the United States. Trump fanned the flames of internet conspiracy theories that Obama was born in Kenya, a movement more popularly known as “birtherism,” repeatedly demanding to see the the president’s birth certificate. Trump finally admitted he was wrong, but these rumors have been depressingly persistent. A poll conducted earlier this year showed that 41 percent of Republicans still believe Obama is foreign born.

It’s difficult to govern when a quarter of the American public feels that your presidency is founded on a lie. Obama, whose first term in office was marred by Republican obstruction, knows this well. Hillary Clinton may learn this lesson the hard way. Trump supporters have warned of a “civil war” if she wins the election, fearing that the illegitimate POTUS will strip them of their rights to gun ownership.

“And I will tell you, just from me, and I don't want this to happen, but I will tell you from me personally,” one Republican voter in Iowa told Des Moines’ KCCI, a local news affiliate. “If Hillary Clinton gets in, I myself am ready for a revolution, cause we can't have her in.”

It’s likely that Clinton will be voted into office just under three weeks from now, but this election is a no-win situation. “Going high” might keep Mrs. Clinton from sinking to his level — thus, dirtying her hands with Trump’s filth — but in facing off against America’s biggest troll, the mud may unfortunately stick to her anyway.