As lifelong baseball fans, the closest my dad and I have come to a World Series win is "Major League" — until now 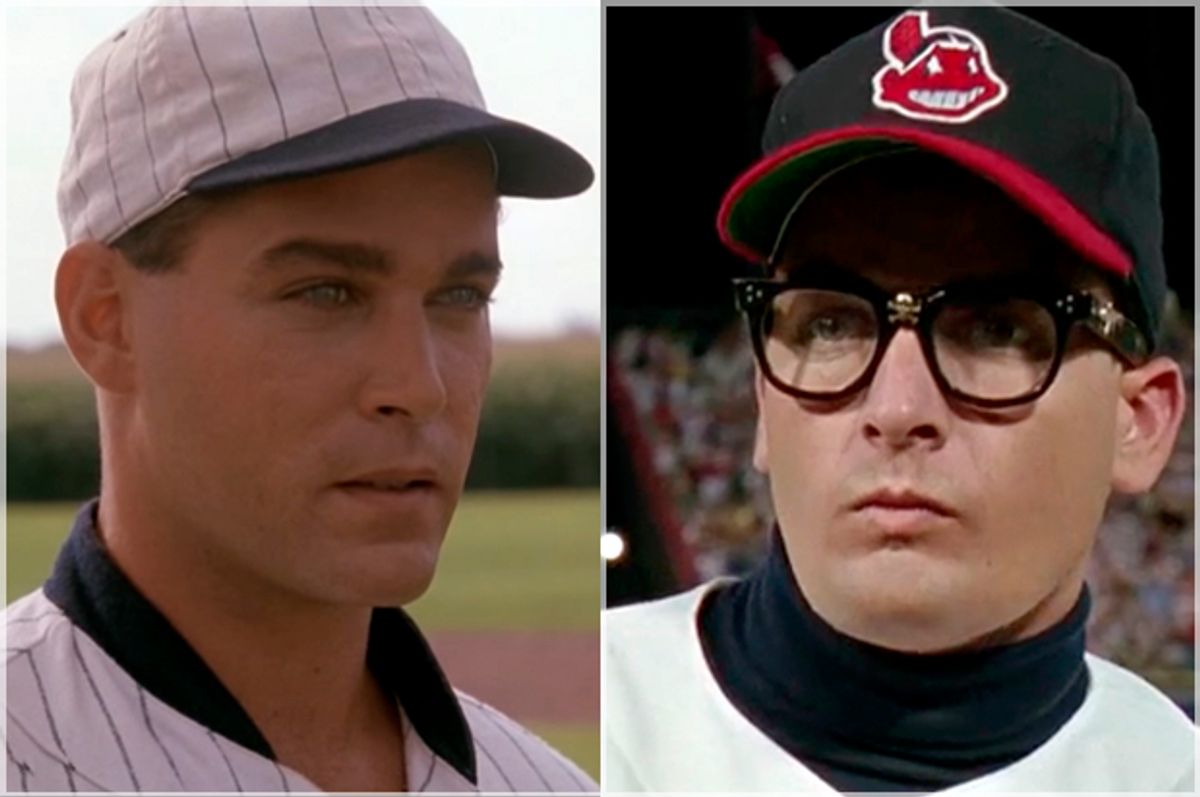 In a year full of improbable victories and stumbling blocks, the Cleveland Indians' American League pennant-clinching win possessed the most absurd premise of all. With ace pitcher Trevor Bauer out after slicing his finger with a drone, the team turned to a 24-year-old rookie, Ryan Merritt — making just his second major-league start — to face the Toronto Blue Jays. Merritt allowed zero runs and two hits while pitching nearly five innings, good enough to keep the Indians competitive until the team's dominant bullpen could come in and finish off the Jays. It's a cliché to say the game felt scripted by Hollywood — but, then again, a rookie pitcher coming in to shut down a tough opponent during a crucial game was a subplot of 1989's "Major League," a movie that portrayed a fictionalized version of the Indians winning the World Series.

I cry every time I watch that movie. Not only is the idea of an underdog team winning a championship powerful but, to date, "Major League" represents the closest thing to a hometown World Series win I've experienced during my 30 years as a baseball fan. In 1986, my parents took me to see the Indians play the Baltimore Orioles at cavernous Cleveland Municipal Stadium. The venue was uncharacteristically packed due to a ticket promotion, and so all I remember about the game was lots of very tall people and plenty of electric, excited energy. It was enough to make me a massive Cleveland baseball supporter for life, however. Coming of age as a fan in the late '80s — an era when a losing record was a given — ensured my expectations were always tempered (and low). Even during the halcyon '90s, when the team was formidable and successful, there was always the sense that things could go awry at any moment.

Call it imposter syndrome, or chalk it up simply to being realistic. Although the 2016 postseason so far has been magical — and the Cavaliers' 2016 NBA Finals win slaked the city's championship drought — there are no guarantees for Cleveland baseball fans. That's a painful lesson learned from the 1997 World Series, when Indians reliever José Mesa blew a save opportunity in the ninth inning and the team lost in extra innings. (Mention his name to any local fan even today, and don't be surprised to receive hissing and death stares.) Cleveland sports fans excel at holding grudges, and are even better at waiting for the other shoe to drop. Having an NBA Championship in our back pocket hasn't completely erased that mindset, at least for me; I've seen too many games and teams collapse, and too many sure things dissolve, to consider victory until it actually happens.

The Cavs winning the NBA Championship felt like a modern-day retelling of the Homeric epic "Odyssey," courtesy of LeBron James' circuitous (and often tortured) journey back to his hometown to vanquish the powerful Golden State Warriors. The Indians' path to the postseason, however, isn't predestined as much as it's aligned with baseball's enduring knack for dramatic ebbs and flows. It's easy to romanticize baseball: Historically, the sport has seen its fair share of wrenching tragedies and unqualified triumphs, both on and off the field. Baseball lore, meanwhile, is littered with wacky characters and talented sluggers, ragtag teams and accomplished squads. And gameplay itself is predicated on innate, graceful precision: The pace is brisk when appropriate, leisurely and polite at other times. Because baseball is so compelling, so full of soap opera-like qualities and cinematic story arcs, fans become invested in players and games in much deeper, profound ways.

Plus, what baseball can symbolize — and how it can bring people together — is also conducive to sentimentality. Hollywood has always excelled at capturing this idea. "Field of Dreams," with its quest for second chances, of having a do-over and making things right with a deceased father, makes me sob every time. I also get teary during "A League of Their Own," when the women of the All-American Girls Professional Baseball League finally receive recognition for being pioneers, or the iconic home run scene at the denouement of "The Natural." Even the film "Fever Pitch," which involves a climactic moment in the middle of Fenway Park, transcends rom-com tropes because of its baseball ties and backdrop. The sport cements relationships, both familial and romantic, and creates unshakable, unspoken bonds.

My own father is the person who got me into baseball, and he's the one I always call or text after good or bad fortunes. On the first day of this year's postseason, as I was at the airport heading home from a trip, I learned he had a health setback. ("Do not freak out," read the subject of my mother's email, a solid way to ensure I became one of those weird people in the rental car shuttle trying not to cry, as my heart dropped into my stomach.) The setback will require unspecified treatment in the spring, although my no-nonsense nurse mother calls it "just a little blip in the road of aging." Baseball's been a good distraction.

Still, I've been a little weepier than normal this postseason, a time when I'm always emotional to begin with no matter who's playing. My dad was born in 1949, the year after the Indians last won a World Series, and so he's been waiting his entire life to see his beloved baseball team win. Cleveland sports futility has deeply affected generations of fans — a unique regional wrinkle mentioned over and over in the wake of the Cavs' victory. However, sharing both small victories and enduring defeats is in the DNA of every local fan. Younger generations want their fathers, mothers, grandfathers and grandmothers to see a championship; parents are happy that their kids don't have to experience decades of lost opportunities.

And when these generations are no longer around to see Cleveland baseball success, it's particularly bittersweet. This most recent pennant win threw this into sharp relief. There was a Twitter pal who lost his father (an Indians fan) earlier this year, and was texting with siblings about the game; the random fan who tweeted a photo of the last Cleveland ballcap his dad bought for him before passing in 2004; and a man interviewed on TV buying championship merchandise, who mentioned his dad was no longer with him. Personally, I also thought of my junior high English and journalism teacher, who passed away late last year. A massive Cleveland sports fan, he encouraged both my writing and my love of baseball, which meant the world to me as a teenager. He would've been delighted to see this Cleveland team — and also to read this piece.

In keeping with my wary nature, I'm making no bold predictions about the World Series. I do know I'll be pacing the hallways during tense moments, and at my parents' house watching as many games as I can. Old habits die hard — as do old jinxes — and so I'm going to stay excited and hopeful, but also pragmatic. Baseball fortunes can turn on a dime, which is both charming and agonizing. Careful strategy and statistical analysis, rather than brute force, can influence a game's outcome, and anybody can be a hero if they're having a good day. That's the beauty of baseball — and what continues to make the sport so eternally beloved.