Has Donald Trump destroyed his brand and his business? The GOP nominee stands to lose more than the election

Trump's D.C. hotel is a flop, his New York condos are declining in value and celebrities have turned against him 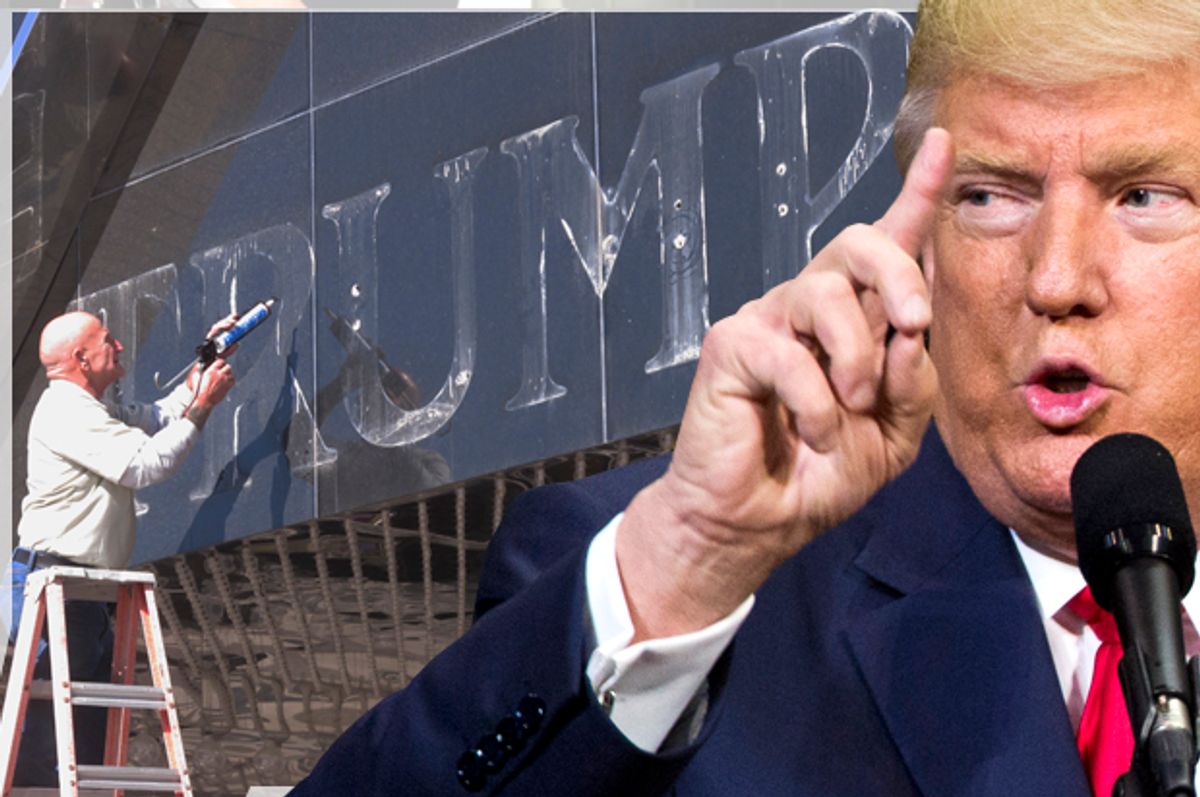 If the polls hold up and Republican nominee Donald Trump loses the election next month, America will have dodged many bullets. One of them will be the prospect of having a president who thinks he can avoid conflict of interest by turning his privately owned international brand and real estate business over to his children while he's in office.

With the exception of one big story in Newsweek that issue has not been seriously pursued by the news media, even though it would have literally been impossible for Trump to properly carry out the duties of the office had he won, given the nature of his business and the legal problems that would have ensued if he tried to extricate himself from it. Trump would have had to unwind his businesses years before running for president to avoid being paralyzed by conflicts.

He may come to regret not having done so, even though he's probably going to be back to full-time "dealmaking" in about three weeks. We don't know how much he was worth when he started this campaign but reports are suggesting that it's a lot less today. The Trump brand has a problem and it's spreading beyond his consumer goods to his real estate holdings.

Earlier this week, The New York Times reported that regular customers for his consumer goods are throwing out their Trump merchandise in small acts of rebellion against his baleful candidacy. And some of Trump's well-heeled customers are now boycotting his hotels and golf courses and refusing to dine in restaurants on his properties. One retired doctor interviewed for that story canceled an $18,000 vacation at Trump's Doral golf club with 11 of his buddies, saying, “For me, it’s an ethical statement.”

Ivanka Trump's clothing line has been similarly affected. Her customers are young working women — few of whom are voting for her father. And she is obviously concerned, although in typical Trump fashion the woman everyone sees as the classy face of the Trump empire reacted very much like her father earlier this week, when quizzed about his "rigged election" talk at the Fortune Most Powerful Women Conference in California. She said this:

I will tell you that the media has been vicious and, look, there’s a lot of businesspeople in the room. We’ve all had articles written about us by the business press that we say, “Hmm, you know, that wasn’t exactly fair,” or, you know, the fact-check — there’s a few things off. But you know, this has been, this has been a different level. And look, we take it personally. Obviously, there are some things said that are deeply personal, but just on a less emotional example this week or in the last couple of days, I saw on the front cover of The New York Times a story talking about how the Trump brand was being decimated due to the campaign.

She further complained that the Trump Organization had provided all kinds of statistics challenging the Times' conclusions, but the paper refused to listen. She said, "I think that the bias is very, very real. And I don’t think I would have said this to you even a year ago. I don’t. But I’ve just — I’ve seen it too many times. It’s tremendous." Since the question was about the campaign and she immediately launched into a diatribe about the media being unfair to the business, it's logical to assume that she is feeling the pressure in that regard.

According to various other reports, Ivanka and her family have good reason to worry. The Los Angeles Times has reported that some of Trump's wealthy tenants are embarrassed to live in properties with his name on them and would like it to be removed. The paper quoted one saying, “I used to tell people I lived in Trump Place. Now I say I live at 66th and Riverside Boulevard. He has a mouth like a sewer." These are mostly licensing deals, so it may not be possible to change the names until the contracts expire, but it doesn't bode well for new ventures.

As hard as it is to believe considering New York's overheated real estate market, properties with the Trump name are losing value, including those he owns. Broadcaster Keith Olbermann sold his Trump condo last summer. tweeting, “I got out with 90% of my money and 100% of my soul," and told the Los Angeles Times that his neighbors also wanted to sell but couldn't afford to lose the money.

Trump's hotels are suffering, too. Los Angeles Dodgers star Adrian Gonzalez famously refused to stay with the team at the Trump hotel in Chicago during the National League playoffs, in protest against Trump's bigotry. According to New York magazine, the new Trump hotel in Washington, which the candidate has often used his abundant free TV time to advertise, is not doing well. It's had to reduce rates during peak season, and is facing protests and boycotts, along with lawsuits stemming from broken contracts with restaurateurs who want nothing to do with Trump's name. (According to the article, many people predicted that the D.C. hotel would be another Trump failure, so this may be less about his toxic campaign than his usual terrible business sense.)

The folks who go to Trump rallies and buy red Make America Great Again hats and "Monica sucks but not like Hillary" T-shirts may buy a Trump tie for dad's birthday or pick up a pair of Ivanka high heels for their cousin's wedding. But most of Trump's fortune is tied up in luxury properties and licensing deals for people who play golf at his golf clubs, stay in his expensive hotels and buy multimillion-dollar condos in buildings with his name on them. They live in big cities and wealthy suburbs, and many of them are appalled by Trump's crude campaign. They can vote with their pocketbooks, too.

It certainly sounds as if Keith Olbermann could be right when he said, “In Russia, there was quite a spree of pulling down statues of Stalin and erasing his likeness from buildings. That’s how the real estate market will treat Trump.” When your name is your brand and your brand is your business, people running away from it is a problem. Donald stands to lose a lot more than the election.