Hillary's Saturday Nights: The good, the bad and the ugly of "SNL’s" Clinton impressions

Hillary Clinton has enjoyed — and endured — a 23-year history with "SNL." Some teams get her better than others 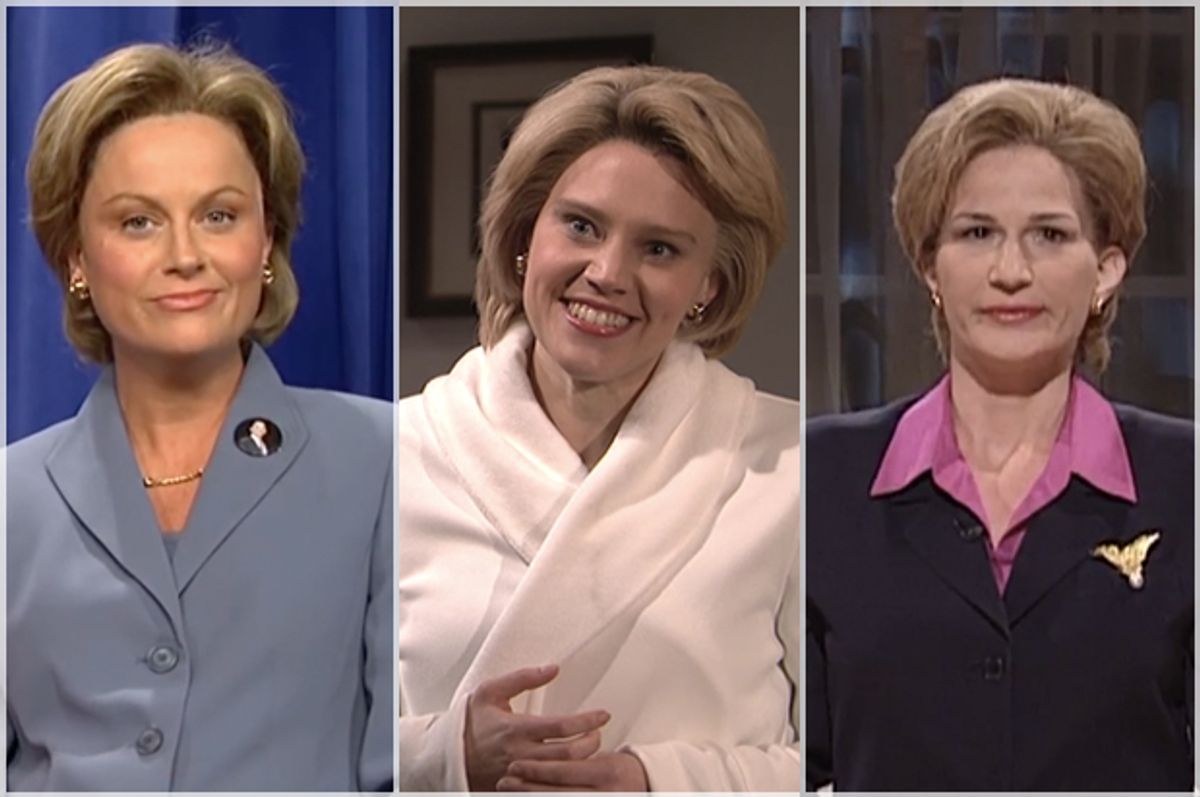 Who is Hillary Clinton?

That’s a question “Saturday Night Live” has struggled to crack over Clinton’s three decades as a public figure. As first played by Jan Hooks, her first appearance as a character on the show, back in 1993, resembles little of the woman we know now. Referring to herself as “co-president” of the United States, Hooks' Clinton isn’t a pantsuit-wearing wonk but Capitol Hill Barbie, an airhead who has grand ambitions but zero gravitas to back them up. When her husband, Bill (Phil Hartman), asks what’s in her much-lauded proposal for universal healthcare, Hillary is unsure. “Free needles for addicts,” the former First Lady responds with an implied question mark. “You will not be able to choose your own doctor — now that we know.”

Designed to be outsmarted by the male politicians around her, Hooks’ Clinton is a vain egomaniac who looks a great deal like Debbie (Joan Cusack), the bottle-blonde gold digger in “Addams Family Values.” Dan Aykroyd does a spot-on impression of Bob Dole, who appears out of nowhere to put Hillary in her place. “Hillary, why don't you give it a rest?” he asks, exasperated. “No one elected you to a damn thing!” Chiding Mrs. Clinton for her infamous comment on “baking cookies,” Dole literally tells her to go back to the kitchen.

Clinton’s portrayal on the show has changed considerably as Hillary’s role in public life has shifted. She is no longer the wife of a politician but a politician in her own right, a former senator and secretary of state who boasts the accomplishment of being the first woman to receive the Democratic nomination for the presidency. In the years since, Clinton has been played by Janeane Garofalo, Vanessa Bayer, Ana Gasteyer, and even Miley Cyrus.

But the more things change, the more they stay the same. Although Amy Poehler’s take on Clinton highlighted the double standards to which she is subjected, the current "SNL" depiction of Hillary is riddled with the same distrust of female ambition that has plagued the character throughout her public life. Kate McKinnon, who won a well-deserved Emmy in 2016, is a national treasure, but her Hillary is an amalgam of the portrait Republicans have painted for years — that of an out-of-touch, power-mad crone. During her mock debates with Alec Baldwin’s Donald Trump, the character displays many of the same tics as previous editions, particularly her obsession with relatability. What’s missing, however, is any understanding of the person underneath the caricature.

It’s telling about the show’s treatment of Clinton that she has often been a filler in her own sketches. During Garofalo’s brief stint on “Saturday Night Live,” she played Hillary just once: 1994’s “The Clintons’ Gifts to the Middle Class.” The sketch mocks Bill Clinton’s (Michael McKean) obsession with talking about the middle class in an effort to pander to prospective voters. Letting her red blazer and bouffant do most of the work, Garofalo is dead-eyed and distant, as bored with the character as her writers are. She knows she’s just meat in the room.

The impression would come of age under Gasteyer’s tenure. The “Suburgatory” actress had the thankless task of playing Clinton during the Monica Lewinsky scandal, a job she remembers as being difficult. “It’s hard when someone's going through a private, personal crisis,” Gasteyer told Vanity Fair. “As an impressionist, it’s not fun to rip that up, you know?” Rather than playing Hillary as the butt of the joke, as in earlier portrayals, her Clinton was not the target. Gasteyer calls her “a long-suffering eye-roller,” someone forced into a bad situation by her husband’s infidelities. In 1998’s “Clinton Bedroom Problems,” Bill attempts to pass the time in bed while his wife sulks next to him. He turns on the television, but every single channel is talking about his affair.

It wasn’t until Mrs. Clinton decided to run for office, announcing her candidacy for the Senate in 2000, that the portrayal came into satirical focus. In “The Old and New Hillary,” the Congressional hopeful praises a rebrand designed to make her more palatable to voters, all while her husband hovers in the background. She tells him to please leave while she’s talking. “That was the new Hillary,” Clinton says. “The old Hillary would have yelled, ‘Get out of here, you camera hog.’ She would have said, ‘This is my campaign for once! I kept my mouth shut a long time for you! But this is about me! Me! You got me, Bill?’”

It’s this tension between the person that Hillary actually is and the public figure she hopes to present on camera that makes Gasteyer’s Clinton interesting. Clinton's not very good at playing to our expectations of women, whether it’s the supportive wife who stands by her man after a betrayal of trust, the mother who dotes on her family by spending her time in the kitchen, or someone we feel like we could share a beer with. Even as Clinton promises that she will no longer be the “rigid and awkward” woman that America once knew, her delivery itself is forced. It’s clear that although she desires political office, Hillary isn’t comfortable with the blatant pandering that comes along with getting there.

If Amy Poehler’s portrayal of Clinton remains the gold standard, it’s because, like Gasteyer, she consistently “punched up.” During Clinton's failed presidential campaign, 2008’s “MSNBC Democratic Debate: Clinton vs. Obama” took aim at the fawning coverage of Hillary’s opponent, while she was subjected to intensely harsh scrutiny throughout the race. Tim Russert (Darrell Hammond) calls Barack Obama (Fred Armisen) “really eloquent, amazingly eloquent, astonishingly eloquent,” while asking the candidate softball questions. Meanwhile, he grills Clinton about her support of NAFTA, which she denies. To make his case, Russert not only pulls out a transcript of a speech Clinton gave favorable to the trade agreement but a photo of Hillary in her car on the day of the event. He even has a glass with her lipstick on it.

The Poehler years offered an overtly feminist reading of Clinton, which took on the gendered criticism levied at her. Clinton says the fact that she’s perceived as “annoying,” “pushy,” “grating,” “bossy” and “shrill” will make her more effective at dealing with Big Oil. “The special interests will... go: Enough!” she says. “We give up! Life is too short to deal with this awful woman!” Poehler's Clinton is so close to the presidency yet so far away, blocked from the highest office by a pervasive culture of sexism.

That thesis was most famously demonstrated by “Palin/Hillary Open,” the sketch that debuted Tina Fey’s devastatingly perfect impression of Sarah Palin. Hillary, as played by Poehler, barely conceals her thinly veiled rage at the predicament in which she has found herself, sharing the stage with a self-described hockey mom who believes global warming is “God hugging us closer.” “I scratched and clawed through mud and barbed wire, and you just glided in on a dog sled wearing your pageant sash and Tina Fey glasses,” Clinton says. When Palin remarks that all you need to do to be president is “want it,” Hillary retorts, “Looking back, if I could change one thing, I probably should have wanted it more.”

There’s a wounded humanity in Poehler’s impression lacking in McKinnon’s take, which has particularly zeroed in on Clinton’s struggles with likability. In 2015’s “A Message from Hillary Clinton,” the candidate says, “Tonight I am speaking to you not as Secretary of State, or as a senator or as a First Lady, but as a relatable woman on a couch.” While debating Trump for the first time, Clinton injects an anecdote about her “human father.” “He made, I guess, drapes or some kind of drapes, and he was relatable,” she says, concluding: “I am also relatable.”

McKinnon’s version of Hillary shares a great deal in common with the Gasteyer era. They’re both Lady Macbeth driven mad by their will to power, yet frequently denied the very things they want most. Gasteyer, though, played both sides of her — the victim and the budding Machiavelli. While McKinnon is one of the funniest women on the planet and a joy to watch, the writing doesn’t boast the same complexities, often giving in to stereotypes about powerful women rather than challenging them. While filming a campaign announcement video on her phone, Hillary can’t get the tone right. She goes full Orwell when she should be intimate and personal. “Citizens, you will elect me — I will be your leader,” Clinton says.

The character’s Shakespearean madness is fun, but “Saturday Night Live” has stopped examining what drove the character over the edge. The Clinton parody of 2016 doesn’t so much lampoon sexism in politics as it plays up the absurdities of Hillary’s own image — the ridiculousness of a woman who desires to be president so badly that she’s lost her ability to be a person. When a bartender named Val (played by the real-life Hillary Clinton) suggests that Hillary treat herself to some much-deserved time off, the fictional edition has no idea what that means. She can’t even pronounce the word “vacation” correctly.

What Poehler understood, however, is that if Clinton is an unrelatable workaholic, it’s because she’s had to work twice as hard just to be viewed as roughly equal to the less qualified candidates around her. Her whole life is politics because she doesn’t have a choice. Clinton’s challenger is a man with no political credentials, one with a history of allegedly violating women’s consent. How does it feel to have broken every glass ceiling and still be seen as little better than a racist buffoon? That’s the question we should be asking.