With Donald Trump warning that the 2016 election is "rigged," hatchetman Roger Stone hatches a scheme to prove it 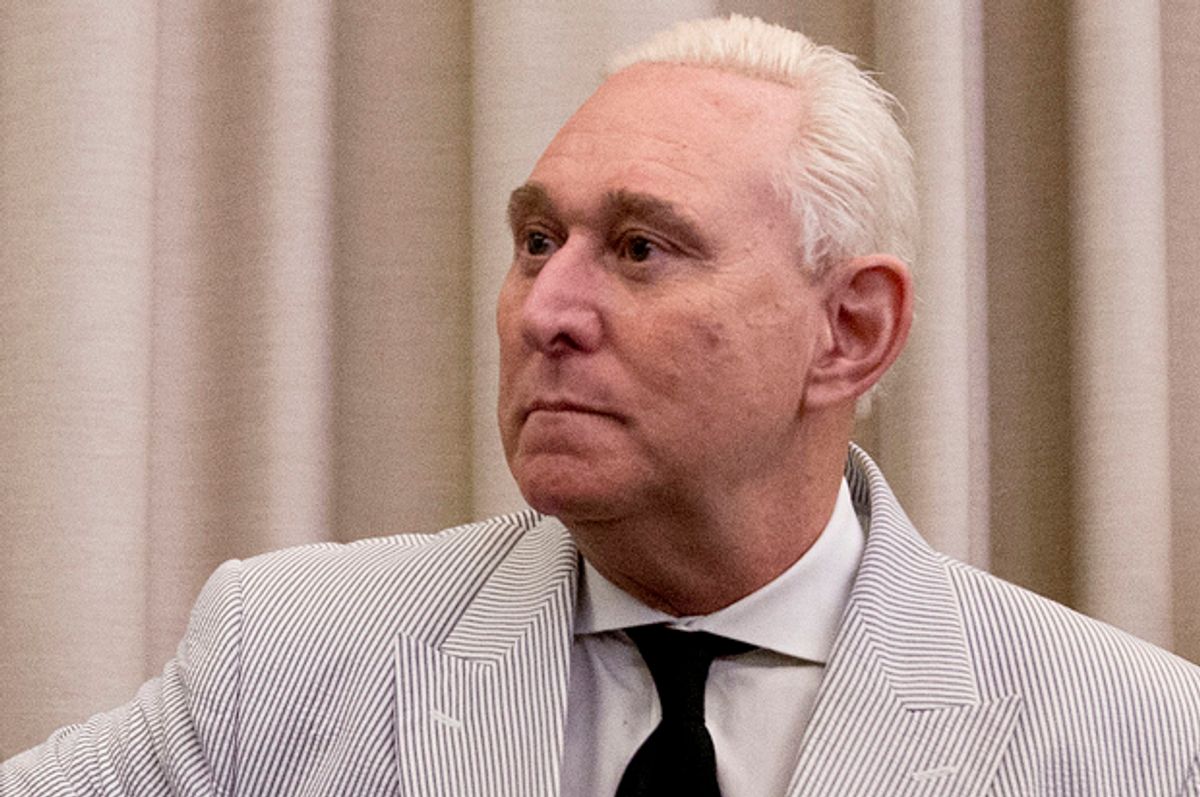 The integrity of the elections system has become a major issue in the 2016 election, even though there is no actual reason to doubt to the integrity of the elections system. The only reason we’re even talking about it is because Donald Trump, building off years of Republican and conservative fearmongering about rampant voter fraud, is insisting that the election is somehow rigged against him. He has no proof of this, and he’s making this argument to rile up his base and provide a handy rationalization for what looks to be an impending loss. The candidate is taking every step to undermine confidence in the political system, and now the political operatives in Trump’s orbit are joining the cause as well.

As first reported by the Guardian, Trump hatchetman and political black-ops aficionado Roger Stone is apparently planning on conducting “exit polling” in specific locations on Election Day in order to sniff out evidence of election “theft.” Trump himself has been calling for his supporters to organize themselves into amateur poll-watching squads to go monitor “certain areas” of their states — generally understood to be the Democratic areas with high minority populations — for signs of voter fraud. Stone is following this same formula, only he apparently intends to recruit people as amateur pollsters.

What this “polling” will look like is really anyone’s guess. Stone says he has 1,300 volunteers lined up to “poll” 600 voting precincts on Election Day. How he’s going to get all these volunteers trained and organized in just over two weeks isn’t readily apparent. And what he plans to do with the data they collect also isn’t clear. An email to Stone asking for clarification on these points wasn’t answered.

But I think I have a pretty good idea of what Stone has in mind, and it all goes back to one of the 2012 campaign’s unkillable conspiracies.

If you’ve spent time listening to conservative talk radio or poking around right-wing websites, you’ve probably heard or seen scandalous reports that Mitt Romney won zero (0) votes in 59 voting districts in Philadelphia in 2012. Sean Hannity is a big fan of this particular story, and he and other conservatives have offered it up as ironclad proof that voter fraud took place and that Romney was denied votes. Even Trump himself has referenced these reports when warning that the “election is going to be rigged.”

The only problem with that interpretation is that it’s bullshit from top to bottom. The districts in question are heavily, heavily Democratic, some with only about a dozen registered Republicans, so it wasn’t really unusual for Romney to get zero votes. Also, it is impossible to subtract votes from the voting machines the city of Philadelphia uses. There was no fraud. Romney’s problem in those Philly districts was simply that literally zero people wanted to vote for him.

None of that sinks through to crusaders like Stone, however, who is on a mission to find evidence of a conspiracy he is already sure exists. This “exit polling” is likely meant to provide evidence of the masses of urban Trump voters who, according to right-wing paranoid mythology, are having their votes erased from existence.

This, of course, presumes that Stone actually plans on doing any of this. You don’t just slap together an “exit polling” operation that spans multiple states and several hundred voting districts. He could be blowing smoke to get Trump people fired up about potential voter fraud. Or, as the Guardian noted, this could end up turning into some half-assed voter intimidation scheme. Regardless of what Stone is planning, there’s still no basis for claiming the 2016 election is rigged in any way, and if/when Donald Trump loses, he’ll have accomplished that feat without any outside help.