You can’t do the Time Warp again: Fox should have left “The Rocky Horror Picture Show” alone 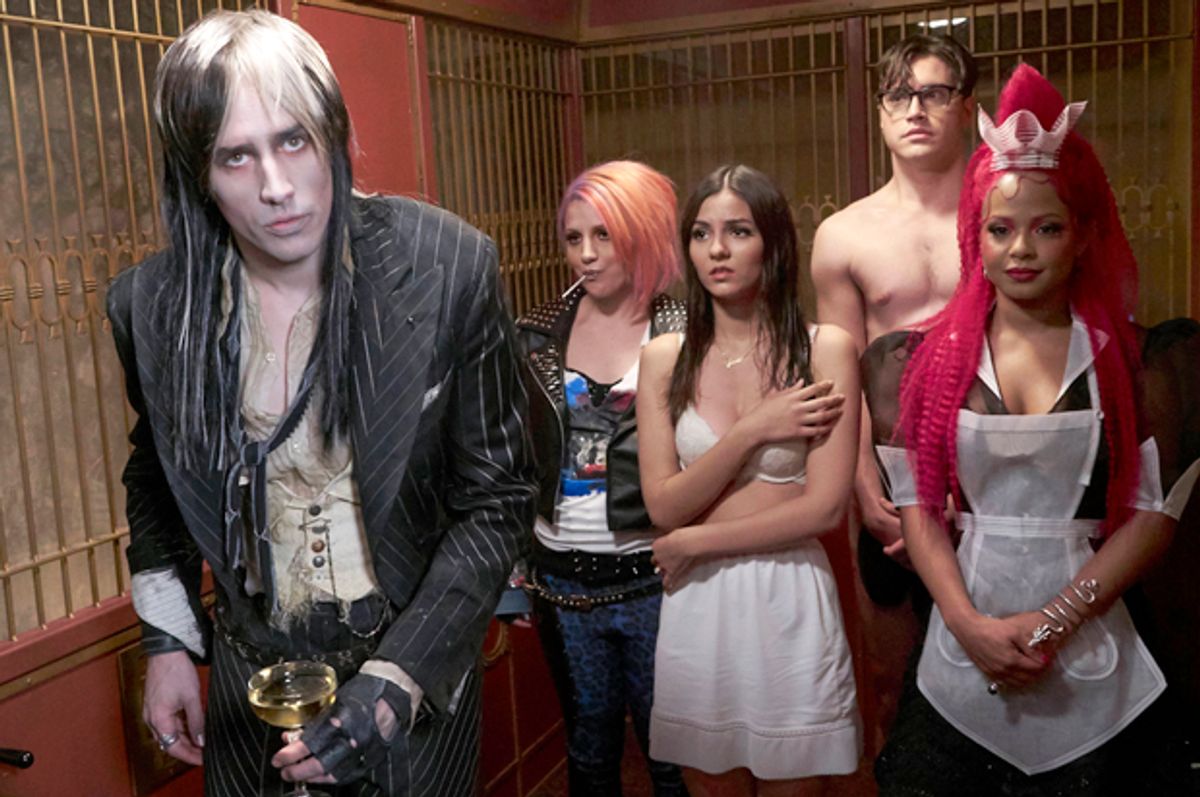 It turns out you can’t do the Time Warp again after all.

Fox’s remake of “The Rocky Horror Picture Show” debuted on Thursday night, putting a “Glee”-esque spin on the 1975 midnight movie cult phenomenon. The young, fresh-faced cast is stacked with former Disney channel stars (Victoria Justice), “American Idol” contestants (Adam Lambert), and early-2000s R&B singers transitioning into acting (Christina Milian). Directed by Kenny Ortega (“Footloose”), the production is punishingly earnest, which has a way of neutering the film’s subversive camp aesthetic. “Rocky Horror” was flirty, dirty, and a bit dangerous—with Tim Curry’s Frank-N-Furter presiding over a bacchanalian orgy of outsiders and misfits. The remake feels strictly PG-13, the kind of thing your grandmother could watch without raising her blood pressure.

There are strong elements in the production. Annaleigh Ashford (“Masters of Sex”), an unexpected delight, is to Fox’s “Rocky Horror” what Vanessa Hudgens was to “Grease Live!” Playing Columbia by way of Cyndi Lauper, Ashford steals every scene she’s in. She especially tap dances the hell out of “Time Warp.” It’s Laverne Cox (“Orange Is the New Black”), however, who is the star of the show. The 32-year-old Emmy nominee doesn’t have Curry’s vocal chops, but she radiates swagger and saucy sex appeal as a cannibalistic mad scientist who just wants to have a little fun.

There’s a problem with Cox’s casting, however, and it’s not the actress herself. The dated gender and sexual politics of “Rocky Horror” make an awkward fit for the most widely recognized trans entertainer in the world. The year before the original film hit theatres, homosexuality was declassified as a mental illness in the Diagnostic and Statistical Manual of Mental Disorders. The DSM, however, wouldn’t do the same for trans people until 2012, when the term “gender identity disorder” was replaced with “gender dysphoria.” In 1974, trans individuals weren’t just thought of as mentally ill. The term “transgender” didn’t even exist, meaning that many people who felt gender difference didn’t know there was a word for it. It’s hard to be something you can’t name.

That’s the cultural context which writer Richard O’Brien found himself when writing the screenplay for “The Rocky Horror Picture Show.” O’Brien, who also plays Riff Raff, wrote the script as an exploration of his own feelings of gender variance, a sense that he didn’t fit in with the traditional categories of “male” and “female.” Today, he identifies as a “third sex.” “I believe myself probably to be about 70 percent male, 30 percent female,” O’Brien has said, explaining that he “ticks the ‘M’ box” to indicate his gender but “would quite like to have ‘Other’ to tick.”

That identity would later become known as “genderqueer,” a term for those who feel that their innermost being falls along a gender spectrum. Alfred P. Kinsey, the pioneering sex researcher, argued that many people don’t conceive of their sexuality at the extremes of the binary, rated as 1 or a 6 on the scale, but instead are somewhere in the middle. Similarly, a genderqueer person might rate their gender as a 3 or a 4. That concept wouldn’t become popularized until the 1990s, when the idea of nonbinary gender entered academic Queer Studies literature. Kate Bornstein, the trailblazing trans writer, described herself as a “gender outlaw” in a 1994 book of the same name. “To attempt to divide us into rigid categories,” she writes, “is like trying to apply the laws of solids to the state of fluids: it’s our fluidity that keeps us in touch with each other.”

That lack of a road map is why “Rocky Horror” plays so fast and loose with labeling. In the song “Sweet Transvestite,” Frank-N-Furter claims to be a “transvestite” from the planet “Transsexual.” Those terms contradict one another. The latter refers to someone who identifies with a different sex than the one they were assigned at birth, then an emerging term in the medical field. Meanwhile, the former is an outdated, pejorative word that connotes a person who dresses in the clothing of the opposite sex for sexual pleasure. A transvestite would include the Lou Jacobi character in Woody Allen’s “Everything You Always Wanted to Know About Sex,” a middle-aged man who covets his wife’s underthings.

“Glee” also struggled to bring the catchy number into the 21st century. In the show’s second season, the New Directions staged a production of “Rocky Horror” with Mercedes (Amber Riley) in the role of Frank-N-Furter. During their rendition of “Sweet Transvestite,” the musical-comedy confusingly took out the term that isn’t objectionable: “Transvestite” stayed, but “transsexual” was swapped for “sensational.” To add insult to injury, Puck (Mark Salling) casually drops the word “tranny” elsewhere in the episode, which is considered by an overwhelming majority of the trans community to be an offensive slur.

The “Rocky Horror” remake attempts to skirt the implications of the song by making it clear throughout the production that their version of Frank-N-Furter is, in fact, a woman. Cox wears a form-fitting burlesque corset that accentuates every inch of her curves, making the character ultra-feminine. If Curry is doing drag, Cox is a 1920s vamp with better lipstick. The trouble is that there’s no getting around the lyrics themselves, which not only conflate various identity markers but refer to the libertine doctor as “not much of a man.” In the original, that statement subverts the character’s masculinity, but here, it reinforces the harmful, incorrect idea that underneath the thick eyeliner and the dog collar, Cox is just a “man in a dress.” Even Frank-N-Furter’s very name is a reference to the fact that the character has a penis.

This a problem shared with “Dallas Buyers Club,” “The Danish Girl,” and even Amazon’s acclaimed “Transparent,” where the lead roles are played not by trans women but cisgender men. As trans activists have argued, casting a male actor in a woman’s role encourages the audience to view these characters not as transgender but people playing dress up, as if their identities were a costume they can just take off. In the case of “Rocky Horror,” it doesn’t help that O’Brien himself has denied the existence of trans women. “You can’t be a woman,” he told U.K.’s Metro. “You can be an idea of a woman.”

As a precursor to our modern notions of identity categories, “Rocky Horror” is a fascinating time capsule of an era where these ideas were fluid, messy, and fraught with conflict. It’s OK to watch the film through that lens when you’re sitting in a darkened theater with your closest friends, throwing popcorn at the screen, and yelling “asshole!” at Barry Bostwick. It’s quite different, though, when applied to a movement still fighting for wider recognition. Trans people have made great strides in media representation in recent years with the success of shows like “Sense8,” “Difficult People,” and “The Fosters,” and “Rocky Horror” is another groundbreaking first: Cox is now the first transgender actress to headline a primetime program on a broadcast network. It’s just too bad it couldn’t have been for a different role.

“The Rocky Horror Picture Show,” which derives its aura of sexual freedom from its very fluidity, will always have a place in the canon. The landmark film was a lifeline for LGBT people who didn’t have other places to express the person they were becoming, the call-and-response offering queer catharsis through audience interaction. Updating “Rocky Horror,” however, is like fitting a square heel into a round hole. The remake has its moments and its commitment to inclusivity is commendable, but this show should have been left to a bygone era, where it rightfully belongs.