The bride wore denim: I traded my "Sex and the City" years for a quickie wedding in Japan

I had a plan for my 20s: Sex with strangers, a fast-track career. How did I end up married at 22? 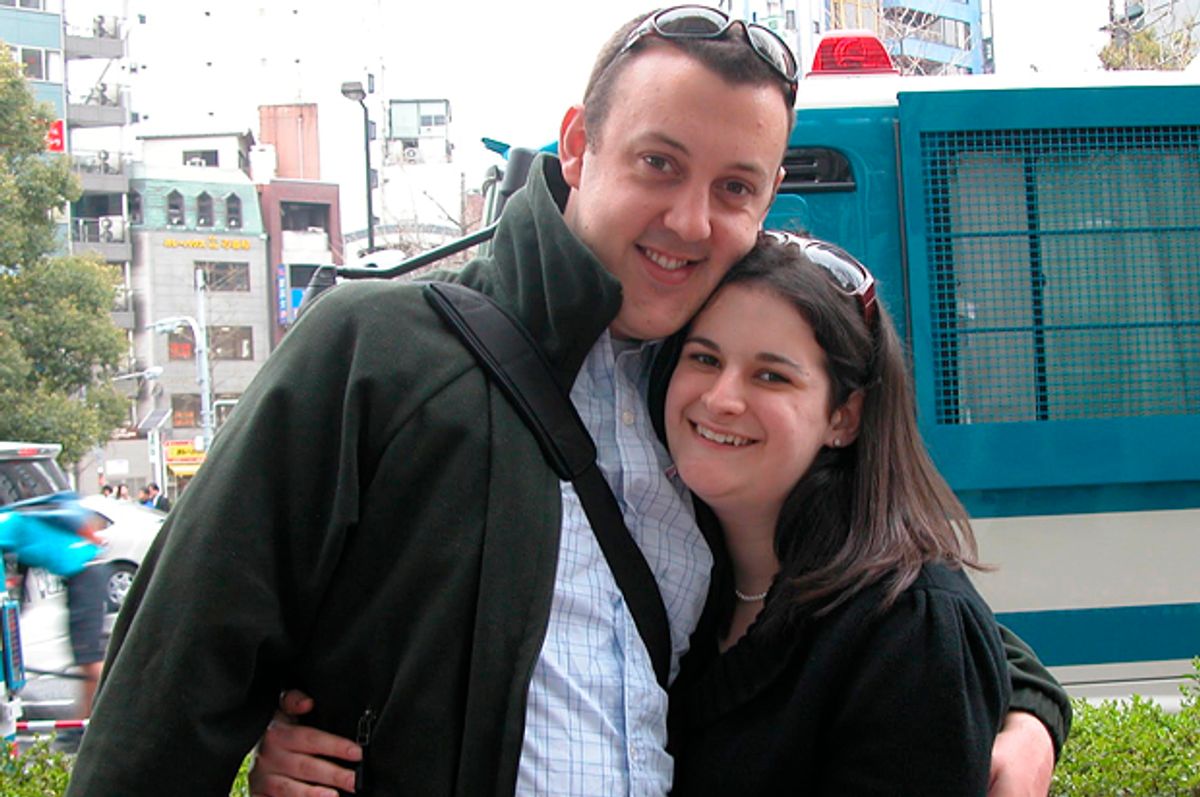 A photo of the author with her husband on their wedding day.
--

“Are you sure you want to do this?” asked Brady, leaning against the countertop of Osaka’s Sumiyoshi ward office, a cramped, windowless space made of Plexiglas, fluorescent lights and beige Formica. Somewhere in a back room, a government official in a blue blazer was retrieving a blank marriage certificate.

“Of course,” I lied, nervously smoothing my jean skirt-cum-wedding dress. The skirt, cut in a pencil silhouette, was tasteful but still technically a thing a pop star might wear while exiting a cab without underpants. It was a skirt that made me feel, despite my marrying an Australian in Japan, country. That I was 22 years old didn’t help. “I mean, unless you don’t want to,” I said to Brady.

“’Course I do,” he smiled. The groom was dashing in a knock-off Ralph Lauren button-front shirt he’d bought for a dollar in Thailand. “I just want to make sure you want to."

I’d never taken time to envision my wedding day, perhaps because I thought I had decades to plan it. When I graduated college two years before — the same year "Sex and the City" went off the air — I'd fantasized about my 20s as a liberated, modern woman: a sexy woman who had tons of sex with sexy strangers met in sexy bars. I’d laugh about them with my girlfriends over cocktails in the evenings. I’d have pregnancy scares and contract benign STDs. I’d suffer heartbreaks by the dozen, realizing in the vodka-soaked, duct-taped aftermath that the only things I needed to complete me were a high-powered job, a closet full of heels, and the steely grit of my very own self. For a hot second in the early aughts, feminism and hedonism were virtually indistinguishable on TV. Both required a healthy dose of heartlessness, a trait I looked forward to honing.

After college, I moved to Japan to teach English conversation in a bid to prove myself as brave and adventurous. Also, I could not get a job in the States. But even more also, I wanted to test myself, to distress the squeaky leather of my soul into something faded, worn, and soft. At 25, Brady, who had been teaching at the school I was assigned to for six months by the time I arrived, was already a La-Z-Boy of a man: big, laid back, unpretentious. I wouldn’t say it was love at first sight, but that was because he was wearing a fake necktie when we met — not even a clip-on, but a Windsor-knot rat-tail affixed to an elastic band he slipped under his shirt collar before lessons. “No one can tell the difference,” he confided in the tradition of his homeland’s koalas, who thrive charmingly with the least amount of effort.

“But you know the difference,” I said, trying to instill shame in him that did not stick.

My middle-class American life had been one big push to do everything the “right” way, which drew me to Japan, a country obsessed with perfection in execution. The trigonometry of a bow, the two-handed grace of exchanging business cards — Japan’s precision resonated with my masochistic, overachieving instincts toward setting standards high and then crucifying myself for falling short. Living wrong in Japan was exhausting, but only if you cared. Brady didn’t, which was fascinating.

He and I were the Goofus and Gallant of life abroad: While I had dutifully studied two semesters of Japanese before I left the States, Brady claimed to have picked up just enough vocabulary to start fights, hit on women and order drinks (though he did only the latter with any real regularity). I wrestled with my obligation to tour UNESCO World Heritage Sites and bathe naked in hot springs to “broaden my horizons” while Brady played darts and rented action movies. I believed I could worm my way into the heart of Japan if I studied enough, but Brady didn’t feel the need. “The only way to fit as a foreigner here is to accept that you can’t,” he said. In a country obsessed with knowing your place in the social hierarchy, he was right, but to admit it felt like an easy way out of having to try.

“But why do you need to try?” he asked over beers one night. “Why can’t you just be who you are?”

Because I didn’t know who I was, I told him. Even after a few months of overseas living, I still felt half-baked with a raw, doughy center.

“Well, you’re pretty amazing,” Brady said with no hint of confession or flirtation, like this was a fact. “The sooner you figure it out, the easier you’ll have it.”

Our “just friends” phase lasted the better part of a year we spent hosting dinners for each other and touring Kyoto on days off. And then, one night, we drank a lot and woke up lovers. Unfortunately, Brady had already bought a one-way ticket back to Australia by then, but still we thought it was a good idea to sleep together through his remaining six weeks, “keeping it casual” in a country where we’d been driven wild by loneliness. For that month and a half, when Brady and I were together, we felt like the only two people in the world. This was because we were the only two people in the neighborhood who spoke English, but wasn’t it kind of the same thing?

"I think I love you," he told me the night before he left, causing me to hate him when he got on the plane anyway. I spent three days drinking bourbon from a water glass and listening to Chris Isaak’s “Wicked Game” on repeat. Begging someone to move in together when there are eggs in your fridge older than your relationship is pathetic, so naturally I did it. I shouldn't have, first because it was undignified, and second because being unable to qualify for a working visa in Australia would render me broke and entirely dependent on a man who liked reggae music. This was neither modern nor feminist, but I was in love, and according to the Beatles, that's all you need.

It was embarrassing to have shown up Down Under professing, “I would have followed you anywhere,” and then 90 days later having to amend that with, “as long as you were going someplace with AC.” But I was miserable in Australia, less from heatstroke and more from nonexisting. Unemployed in a suburban setting with no car, I spent sweaty days at home while Brady went to work, doing housework and weeping in front of the open refrigerator door. The landlord didn’t know I was squatting; my cellphone was a burner. I was a mail-order girlfriend turned imported cleaning lady turned ghost with no friends, no cocktails, no job and no life. I loved Brady, but I also loved myself. He loved me, too, which was why he agreed to go back to Japan, a country where we both could work. “On one condition,” he said as we were lying in bed one night praying a breeze would haunt our room. “We have to get married.”

I’ve been told this is commonly considered a woman’s wet dream: a tall, handsome man with a heart of platinum and a devastating accent does not ask for but demands your hand in marriage. In return, you’ll move with him to an exotic overseas locale, where you both will be millionaires in the local currency and spend the next few years making love on the floor. Had I been older and more mature I would have screamed, “YES! YES! YES!” But being a 22-year-old who thought feminism was something served in a martini glass, I whined, “Aw, man. Do we have to?”

I’d never clubbed, or been on a blind date, or done coke, or gotten crabs from a stranger in a hot tub, or taken my top off in Mexico. That I’d made it to 22 without having done these things suggested I was not the kind of person who would ever get around to doing them, but still, surrendering their potential in favor of monogamy with a man who respected me felt like a betrayal to the woman I thought I was supposed to become. How could I find who I was without losing myself first in dozens of men? In my life I’d had only one wild and drunken hook-up. And now, a few months later, he was lying in bed and asking me to marry him. So it didn’t count.

“Look,” said Brady. “This visa situation sucks.” He was right. September 11th was still fresh in the minds of American immigration officers who trusted no one at the border — not even irreverent Australians who cracked bad jokes and cooked great curry. “Let’s just sign the papers, and then in a year or however long it takes to get the visas sorted, we can go where we want.”

So we moved again to Osaka. And there we were, wearing denim at the government office, about to tie ourselves together in a country we didn't belong to in a language neither of us understood. I wasn’t a high-powered executive who owned real estate in Vera Wang. I was a kid in sneakers being forced to rewrite a future that never existed to accommodate the best souvenir I would ever acquire. The execution was not perfect. The execution was statistically doomed. I was not spending my youth the “right” way.

The government worker returned from the back and laid the marriage certificate on the counter before us with both hands. “I love you,” Brady said. “Do you love me?”

“Then she’ll be apples.”

And even though any modern woman worth her Manolos would have been a fool to believe him, I picked up the pen. Everything went quiet: the clacking of computer keys, the clearing of throats, the hum of the air conditioning, the hammering in my chest. I heard the clean sound of wind as I swan-dived into a glass half full, trusting only in the goodness of a nice guy and the hope that the world wasn’t as heartless as I’d seen on TV. I couldn’t bring myself to stop. I didn’t want to. I was gone.

Angela Elson is writing a memoir about the year she spent coming of age, falling in love, and making an ass of herself on a quest to belong in Japan. Check out angelaelson.com or follow her on Facebook.