Yes, there's a "rigged election": The one that ensures a Republican House majority 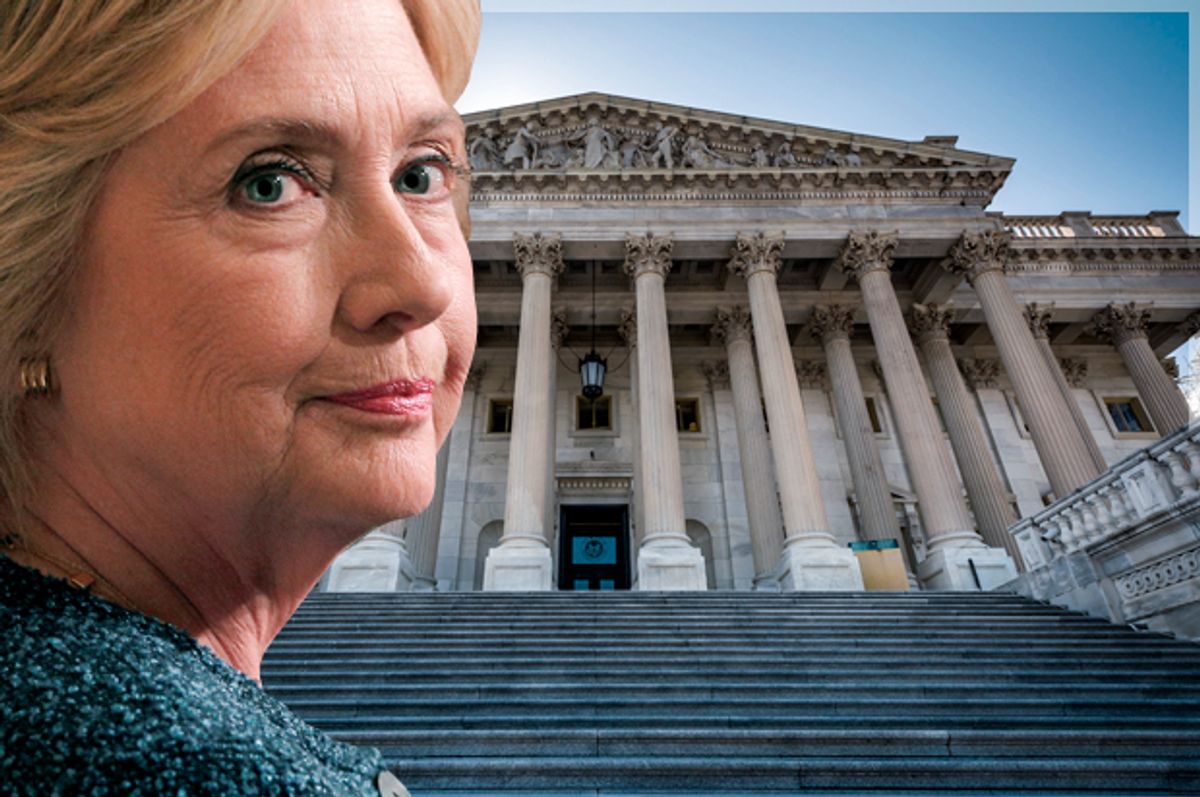 Democrats appear headed for their biggest presidential election in years. Nate Silver has Democratic presidential nominee Hillary Clinton as an 86 percent favorite to move back to the White House. Some polls have given her leads in reliably red states like Arizona and Georgia. Iowa and Nevada are slipping away from Republican nominee Donald Trump; Texas is tightening; Virginia is gone.

Polling averages by Silver and RealClearPolitics suggest that the Republican nominee’s fight is fading in the key battleground states of Ohio, Michigan, Wisconsin, Pennsylvania and North Carolina.

It takes quite a Democratic wave to tilt this many states even powder blue. But most nonpartisan analysts suggest this will not be enough to tilt the House of Representatives. The GOP holds a 30-seat majority in the House. The University of Virginia’s respected Crystal Ball says that as of today, less that three weeks from the election, only 37 competitive districts remain. Of those, 17 are toss-ups, 10 favor the Democrats and 10 lean Republican.

That means Democrats could win all the close races leaning their way and sweep all 17 toss-ups and the Republicans would still keep control of the House. In those key five battleground states? Republicans currently hold 49 of 69 congressional seats and Crystal Ball believes that only one of those Republican incumbents is even vulnerable.

Why is this? The reason is clear: In those five states and many others, Republicans had veto-proof control over the drawing of new congressional districts after the 2010 census. Republican strategists executed a savvy plan in 2010 to flip control of the state legislatures that control redistricting, then took advantage of high-tech mapping tools and draw themselves a decade of control at the state and national level.

Republicans drew 193 House districts by themselves after 2010, Democrats just 44.

In 2012, the first election that was run using these new maps, Democratic House candidates earned 1.4 million more votes than Republicans, but Republicans kept the majority nevertheless. Michigan gave 240,000 more votes to Democratic House candidates, but sent nine Republicans and five Democrats to Washington. Pennsylvania favored the Democrats by nearly 100,000 votes, but the sophisticated new lines returned a delegation that somehow broke 13 to 5 for the GOP.

Americans rightly shivered on Wednesday night when Trump refused to say he would follow tradition and concede the race for president should Clinton defeat him on Nov. 8. Trump’s talk of a “rigged” election and dark intimations about the integrity of our democratic institutions had already come under increasing fire from sober voices in both parties.

“Look, to say that elections are rigged,” said Ohio’s Republican governor, John Kasich, “that’s like saying we never landed on the moon, frankly. That’s how silly it is. I don’t think it’s good for our country, for our democracy. . . . That is a big, fat joke.”

Kasich, however, signed into law maps that built an invulnerable 12-to-4 Republican advantage for Ohio’s congressional delegation and created a GOP supermajority in the statehouse that has endured despite more votes for the Democrats. A veto-proof majority for the side with fewer votes is not good for our country or democracy either.

President Barak Obama, meanwhile, pointed out that elections are run by state and local officials. A majority of governors and secretaries of state are Republican. “There are places like Florida,” Obama said, “where you’ve got a Republican governor whose Republican appointees are going to be running and monitoring . . .  election sites. The notion that somehow if Mr. Trump loses Florida it’s because of those people,” he went on, is “irresponsible.”

In Florida, however, two constitutional amendments overwhelmingly approved by voters in 2010 that forbid any partisan intent in redistricting were not enough to stop Republicans from interfering and rigging the maps. Strategists and mapmakers ran a shadow redistricting process and funneled GOP maps into the public arena through friends, spouses and phony email addresses set up under the names of former interns. A circuit judge who invalidated several of the districts said the Republicans “did in fact conspire to manipulate and influence the redistricting process” and “taint” the maps with “improper partisan intent.”

We’re talking about the wrong problem. Yes, Trump’s critiques that widespread voter fraud could cost him the election, however often he repeats them, have not been substantiated. In the widest recent study, Justin Levitt of Loyola Law School discovered only 31 cases of voter fraud during all election cycles from 2000 through 2014 in more than a billion ballots cast.

Trump’s charges are dangerous and wrong but so is ignoring the very real and serious ways this election is tilted. We need to debunk Trump’s claim without being taken in by the assurances from a bipartisan Beltway chorus that our elections are free and fair. If Democratic House candidates win more votes for the second consecutive presidential cycle, but Paul Ryan retains the speaker’s gavel, it will be an event without precedent and one that makes a mockery of the popular vote.

The most likely outcome in the House, most analysts agree, is that the Democrats capture about 15 seats, with the biggest gains coming in California, New York, a handful of moderate suburban areas and in Florida and Virginia districts where gerrymandered lines were ordered redrawn. That means Clinton will face a GOP majority that’s smaller but also more conservative and even harder for Ryan to control.

It is a recipe for a broken and divisive government. It insulates from the ballot box the very chamber of Congress that is supposed to be most responsive to the people. It will be the opposite of what the majority of Americans have voted for. That’s the very definition of a rigged election.