And the winner is ... crony capitalism: Choosing between Hillary Clinton and Donald Trump is no choice at all 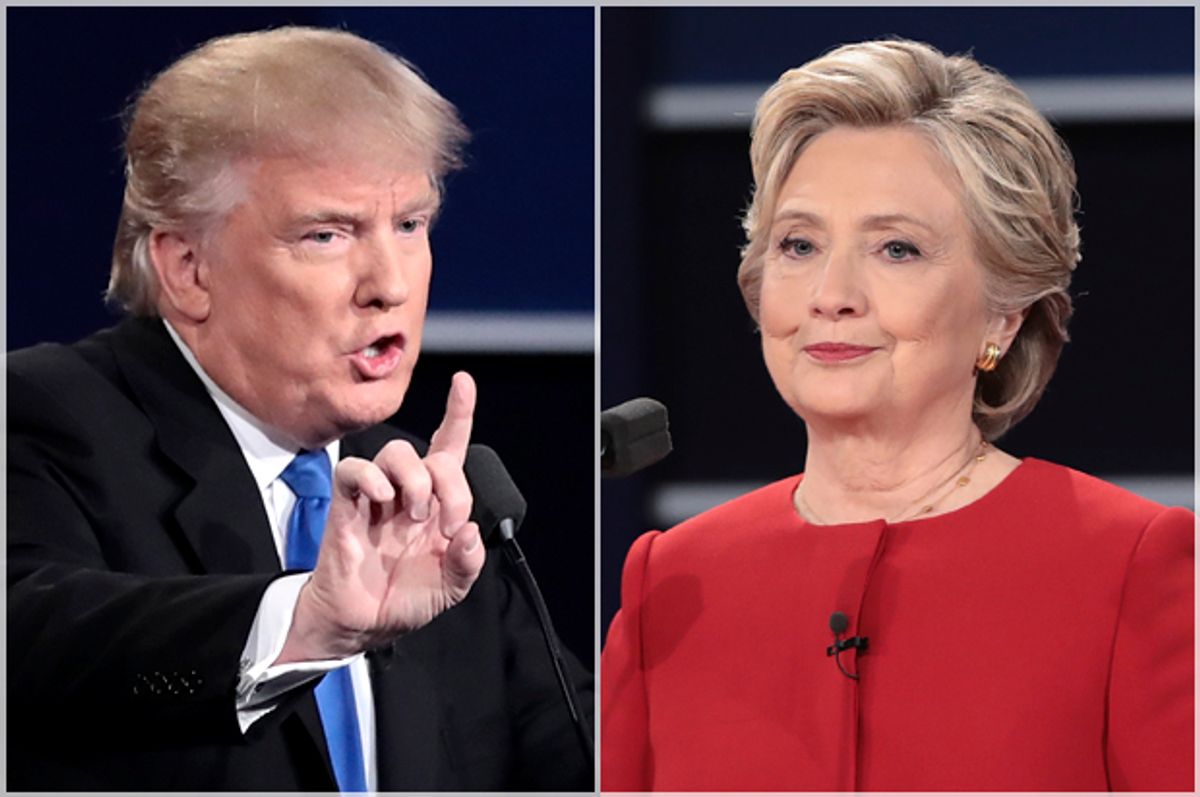 It is as Bernie Sanders has foreseen it, you might say.

With its publication of thousands of less-than-flattering emails from Clinton campaign chairman John Podesta over the past two weeks, Wikileaks has done much to undermine Hillary Clinton in her ongoing effort to appeal to millennials who see Washington as a corrupt town where big business and big government are deeply intertwined.

Excerpts from various six-figure speeches that Clinton made in 2013 and 2014 reveal a politician who is not only quite friendly with Wall Street in private, but somewhat resentful of the American public for constantly attacking and scapegoating big banks for the financial crisis.

“The people who know the industry better than anybody are the people who work in the industry,” said Clinton in one speech. Reform, she continued, “really has to come from the industry itself.” In another speech, Clinton stated that you have to have “both a public and a private position,” which has cast further doubt on her trustworthiness among young voters.

Although these leaks don't reveal anything new about Clinton, they do vindicate many of her critics on the left who have long criticized her ties to Wall Street and maintained that she is too comfortable with the neoliberal status quo. On both the progressive left and libertarian right, Clinton is largely seen as a symbol of “crony capitalism.”

Of course, crony capitalism — a term used to describe an economic and political system in which government officials and big business are closely connected, and thus promote each others' interests over the public good — was the main target of the Bernie Sanders presidential campaign. The democratic socialist railed against the campaign finance system, which wealthy individuals and corporations use to gain influence over elected officials, as well as the lobbyists who have overrun Washington over the past several decades to shape policy that benefits their clients/employers.

Though Sanders has endorsed Clinton and is currently on the road campaigning for the Democratic nominee, it is hard to think of her as the reform candidate.

The Libertarian Party’s presidential nominee Gary Johnson obviously recognizes this, and made a direct pitch to millennial Sanders supporters last week in a campaign ad that zeroed right in on crony capitalism:

“[Millennials] supported Bernie Sanders because he rejects the crony capitalism that has become a way of life in Washington D.C. I rejected cronyism when I was governor, and I reject it now. Hillary Clinton? She’s the poster child for crony capitalism. Her entire life has been about government favoring the rich and picking the winners and losers.”

Throughout his campaign Johnson has compared himself favorably to Bernie Sanders in an attempt to win over millennials, who adore the democratic socialist. But behind the libertarian's cordial pot-smoking persona, there lies a free market fundamentalist who opposes almost the entirety of Sanders' progressive agenda. Johnson may reject crony capitalism, but for very different reasons than Sanders.

American libertarians are against the government getting involved in the private sphere altogether, whether it is to help business (i.e., corporate welfare) or to safeguard the public from big business (e.g., consumer protections, environmental regulations, workers’ rights, etc.). In contrast, progressives advocate a democratic government that works for the people rather than special interests. Libertarians advocate a “night watchman state” where the government’s role is limited to protecting private property and enforcing contracts, leaving just about everything to the unfettered free market, from healthcare and public transportation to education and criminal justice (Johnson expanded private prisons as governor of New Mexico, and would do the same as president).

The fundamental difference between progressives and libertarians, then, is that the former believe that big business tends to corrupt government, while the latter believe that government corrupts big business. If the government would simply limit itself to protecting the property of private individuals like Charles and David Koch, libertarians claim, unfettered capitalism would ensure equal opportunity and unleash perfect competition. This theory is contrary to economic reality, of course, and history shows that unfettered capitalism results in very the opposite of equal opportunity and perfect competition.

Considering that many of the proposed reforms demand more government involvement — like public campaign financing, for example — it is unsurprising that Johnson and his party oppose them, and further proof that libertarian ideology is incompatible with progressive values. Libertarians may oppose crony capitalism, but they offer no sensible plans for reform (dismantling the state and letting the free market run wild is not a sensible plan).

Who, then, is the best candidate for combating crony capitalism? It’s not Johnson, and it’s certainly not Donald Trump — an admitted and unabashed crony capitalist whose stated policies would benefit people like himself. It is ironic, but Clinton is the best option in a race against Trump and Johnson. Unlike the Republican and Libertarian, Clinton has actually addressed issues like campaign finance reform, and supports the repeal of Citizens United. Her plan to reform the campaign finance system may be inadequate -- but at least she has a plan! Sanders supports Clinton because she is undoubtedly a better option than her Republican opponent, and progressives would at the very least have the power to influence her policies as president.

Of course, there’s another 2016 presidential candidate who supports public campaign financing, proportional representation, and many other progressive reforms that would transform the political and economic system. This candidate, the Green Party’s Jill Stein, offers the most progressive platform of 2016 — and it’s not even close.

Does she have shot at winning the presidency? No more than Gary Johnson does. But ideas matter. And while Johnson is attempting to sway millennials into supporting the reactionary dogma of libertarianism, it is absolutely crucial that the left advances a progressive vision separate from Clinton and the Democratic Party. For many progressives, stopping Trump is the number one priority in 2016, and there have been good arguments for voting Clinton (Daniel Denvir makes a strong case in Salon) — especially for those who live in a swing state. But stopping Trump won’t go far toward stopping crony capitalism or achieving the many progressive goals that Sanders put forward during the primaries; only a popular movement built on radically progressive ideas and values can accomplish this monumental task.